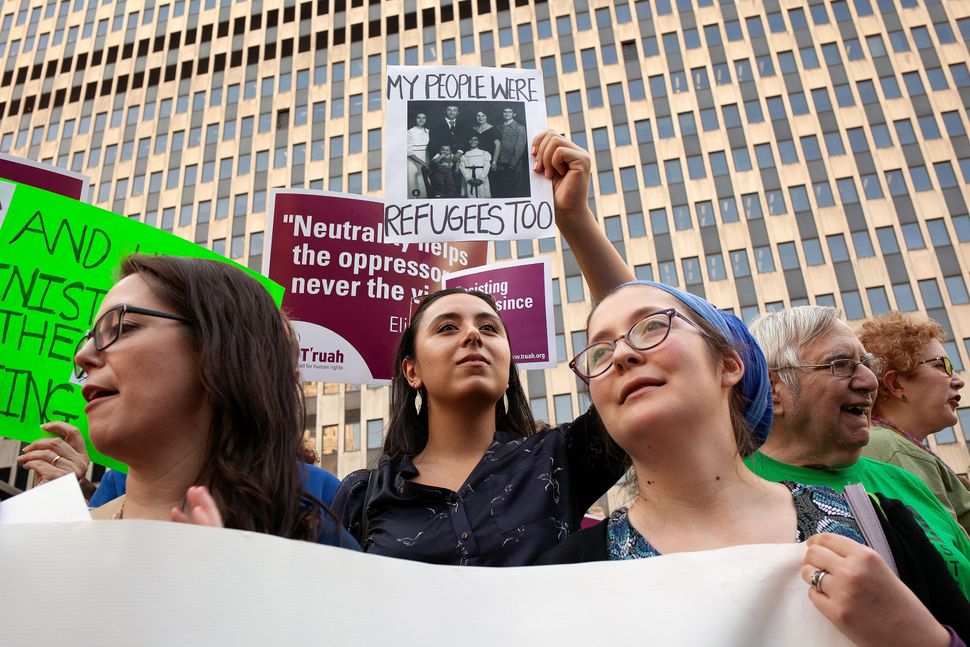 Hundreds of people holding purple placards with messages including “This is what ‘Never Again’ looks like,” gathered outside the federal Immigration and Customs Enforcement building in lower Manhattan Thursday evening to protest President Donald Trump’s “zero-tolerance” immigration policy.

The protest — organized by T’ruah and co-sponsored by groups including J Street NYC and Bend the Arc Jewish Action — comes one day after Trump buckled to pressure and signed an executive order reversing his administration’s actions to separate immigrant families. Hundreds of advocates flooded LaGuardia Airport hours after the announcement in an effort to greet migrant children being sent to New York.

A shofar sounded, and the crowd settled down until Rabbi Mia Simring took the microphone. “How do you feel?” she asked. “Angry!” people shouted back. “We are angry, we are sad, we are confused. Is this the country our families came to for freedom?”

“Our main message is that we want to end the inhumane immigration practices. Defund ICE. And show solidarity as a Jewish community,” said Rabbi Mia Simring at a protest outside ICE headquarters in Manhattan. pic.twitter.com/2TecD6D4vr

The groups are calling on Attorney General Jeff Sessions to end his “zero-tolerance” policy, “immediately” reunite all separated families and allow immigrants a “fair chance” at seeking asylum.

Brad Lander, a city council member representing northwest Brooklyn, was among the impassioned speakers, emphasizing how Jewish values fit in with the rallying cries.

“We are commanded to show up,” he said. “Our history requires that we show up. When we say never again, we meant never again.”

“We’re honoring The Commandments, living up to our values. It’s a profound time of responding to mitzvah, and what’s expected of us.” #KeepingFamiliesTogether pic.twitter.com/k55VAONtez

“I’ve been feeling like many many people since this horror started that I needed to get involved and do something,” said Tony Kushner at the protest at ICE hq in Manhattan. “We clearly have to act quickly.” #KeepFamliesTogether pic.twitter.com/ex3K2nIk1k

Toward the end of the rally, Nancy Wiener put down her sign, reading “Resisting tyrants since Pharaoh,” to share a prayer in Spanish.

Now a prayer in Spanish for the children #KeepFamiliesTogether @jdforward pic.twitter.com/kFQthCqqVW

A small group of counter-protesters hovered at the rally’s fringes, holding up signs such as “Thank you ICE” and “Deport Every Illegal.”

More than 2,000 children were believed to still be separated from their families, some of whom had been housed in Harlem.

Activists rushed to LaGuardia Airport the night of June 20 after seeing social media posts that some migrant children were being escorted by ICE officers into the city.

Trump returned to his tough talk in immigration enforcement on June 21, hours before GOP House members postponed a vote on a pair of bills to address the issue, both of which face stiff opposition. The more moderate proposal offers billions in spending for a border wall, cuts to legal immigration and a pathway to citizenship for DACA recipients.

The president said “Democrat-backed loopholes” have allowed nearly 200,000 “unaccompanied alien minors” to enter the country since 2014.

“They’re the worst immigration laws in the history of the world,” Trump told officials during a June 21 cabinet meeting. “The whole world is laughing at the United States — and they have been for years.” 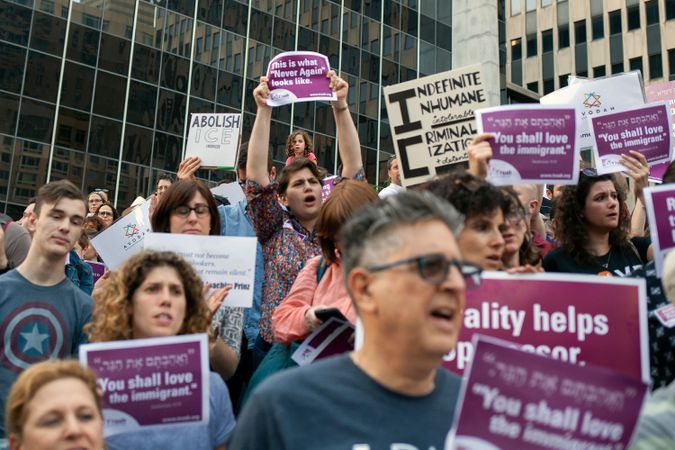 Democratic leaders continued to blame Trump for separating immigrant families and said he should do more to reunite families and not wait for a bill to fix the issue.

“Legislation in Congress remains unlikely, and far more difficult to achieve than the simple, corrective actions that the president can take immediately and administratively. Let us not forget, immigration has been the graveyard of legislation for years in this Congress,” Democratic Minority Leader Chuck Schumer said on the Senate floor on June 21.

“So Congress getting it done is not going to solve the problem, unfortunately, because immigration is such a contentious and divisive issue. The president has to do it himself, and let us hope he does.”