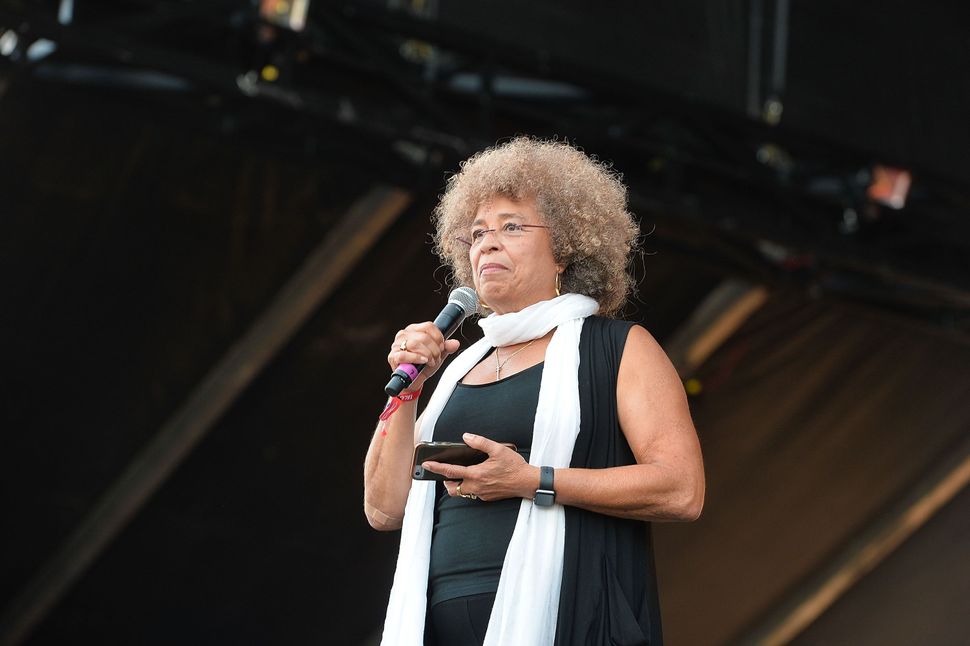 Birmingham, Alabama’s mayor says that protests from the “local Jewish community” led to the cancellation of an award ceremony for a controversial civil rights icon. But questions remain about what role local Jewish leaders played played.

In a statement Saturday night, the Birmingham Civil Rights Institute, a museum focusing on the history of segregation and civil rights in Alabama, announced that it was withdrawing plans to give the prominent radical Angela Davis an award at its annual gala in February. Plans to give Davis the award had first been announced last October.

The museum did not explain in its statement what led it to change its mind. But in a letter posted shortly afterwards, Birmingham’s mayor, Randall Woodfin, said that the cancellation came “after protests from our local Jewish community and some of its allies.”

The announcement of the cancellation drew immediate criticism on social media. “This is shameful,” Temple University professor and commentator Marc Lamont Hill wrote on Twitter.

Yet the connection between the withdrawal and the Birmingham Jewish community remains unclear.

On Sunday morning, the Birmingham Jewish Federation, an umbrella group that serves local Jewish institutions in Birmingham, wrote an email to its members thanking the museum. “The Birmingham Jewish Federation thanks the BCRI board for its thoughtful and courageous reconsideration,” the federation wrote. “BCRI is a great institution that does much to benefit our entire community. BCRI deserves continued and widespread support.”

Yet the Birmingham Jewish community is small, with just 6,000 residents in a city of 200,000, and Jewish voices weren’t the only ones calling for the cancellation of the Davis award.

AL.com columnist Roy S. Johnson reported Monday that a prominent retired general who later led a Christian college in Birmingham sent a letter to the museum board criticizing the selection of Davis based on her political activism in the 1970s.

Davis has a decades-long history of progressive and leftist politics, and is among the most recognizable and well-known political radicals in the country. A former member of the Communist Party, she has been most vocal in recent years as a critic of the prison system. She is also a supporter of the movement to impose boycotts, divestment and sanctions on Israel.

The Birmingham museum’s initial decision to bestow its Fred Shuttlesworth Human Rights Award on Davis does not appear to have been on the radar of the leading national Jewish advocacy groups, and there was no overt campaign by any national Jewish group to cancel the ceremony.

The only item criticizing the award prior to its cancellation ran in late December in Southern Jewish Life, a Birmingham-based magazine serving Jewish communities in the south. In an article published days before Christmas, the magazine’s editor and publisher, Larry Brook, noted Davis’s support for BDS.

“Each year, the Birmingham Civil Rights Institute has an event to present its highest honor, the Fred Shuttlesworth Human Rights Award, but for some in the community, there might be some indigestion at the dinner over this year’s honoree,” Brook wrote.

In an interview with the Forward on Monday, Brook noted that he hadn’t called for the museum to cancel the event in his article. He said that he was aware of conversations with the museum over Christmas and New Years that included members of the Jewish community, but didn’t know who had participated.

“I did a piece basically saying this is who the civil rights institute is honoring this year, this is some of her background,” Brook said. “Figuring there might be some of our readership that might think twice about attending.”

Brook said the was surprised by the cancellation. “Looks like this is going to be a bigger story than it should have been, really,” Brook said.

The executive director of both the Birmingham Jewish Federation and the local Jewish community center in Birmingham, Richard Friedman, did not respond to multiple requests for comment.

In his column on Monday, AL.com’s Johnson wrote that the vice chair of the museum board, Walter Body, said that the museum had “received questions from the African-American community, the Jewish community, and the white community. It was not one just community.”

Johnson wrote that one complaint had come from General Charles Krulak, former president of Birmingham-Southern College, a Methodist school. Krulak’s complaint cited Davis’s past membership in the Communist Party, among other things.

The museum board decided on Friday to reverse course. The board is led by a Honda executive and a Coca-Cola Bottling Company executive. The museum did not respond to a request for comment.