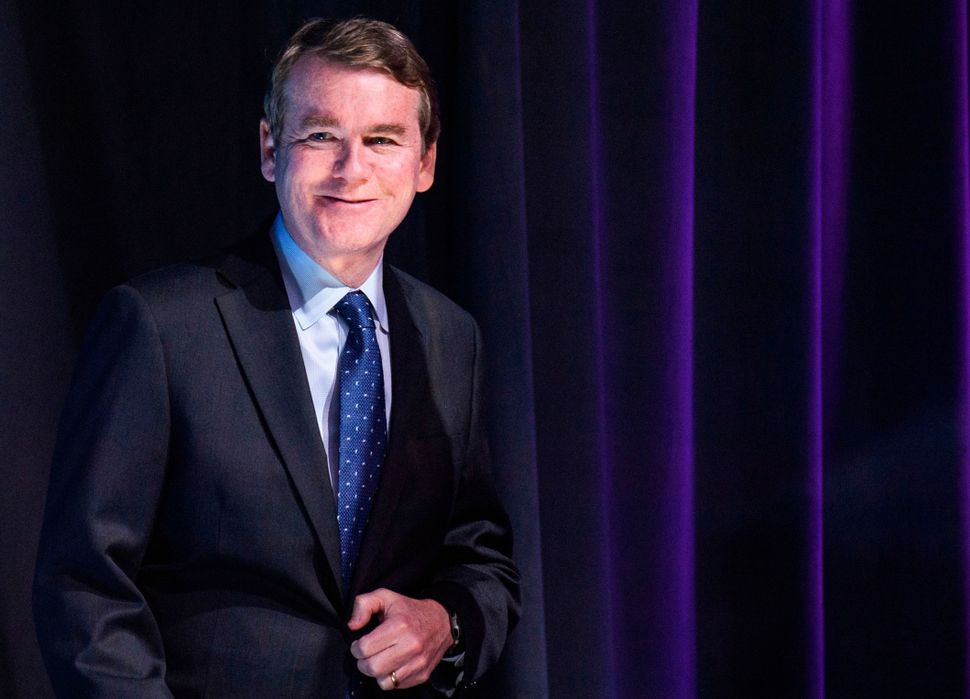 Sen. Michael Bennet’s mother was a Jewish refugee and he is proud of her story, but doesn’t consider himself Jewish. Image by Getty Images

Two sons of Holocaust survivors who both happen to be running for the Democratic presidential nomination took different tacks about their Jewish identities in visits Monday to the J Street convention, perhaps the largest annual gathering of leftist American Jews.

Sen. Bernie Sanders of Vermont, who has often been criticized for playing down his Judaism, stood up from the chair on the convention stage where he was meant to “be in conversation” with two interviewers and started his remarks by declaring: “I am very proud to be Jewish and look forward to being the first Jewish president.”

Sanders invoked the mentioned the time he spent on a kibbutz, and his father’s background, as armor that could protect him against the accusations of anti-Semitism that are often aimed at politicians and activists who criticize the Israeli government.

“Being Jewish may be helpful,” Sanders said to strong applause. “It’s going to be very hard for anybody to call me — whose father’s family was wiped out by Hitler, who spent time in Israel — an anti-Semite.”

Sen. Michael Bennet of Colorado, whose Jewishness is less well-known, also spoke powerfully about his family’s Holocaust history, saying “my mom and her folks were Polish Jews.”

“My mom was separated from her parents during the war,” he said, and this spring, when the Trump administration was splitting up migrant families at the border, “she called me” and said, “What are you doing about this?”

Bennet said that he had spoken to immigrants all over the country and never met any “with an accent as thick as my grandparents.” And, he added, “they were the greatest patriots that I’ve ever known.”

After being reunited, Bennet’s mother, Susanne Klejman, and grandparents, spent a couple of years in Stockholm and Mexico City before landing in New York City, where she attended public schools and they started a small business. He included this immigration odyssey in the article he published on Medium to announce his candidacy in May and also spoke about it during the first Democratic debate; at a town hall in New Hampshire, and at the Texas Tribune Festival.

For Bennet, though, this is an immigration story, not a particularly Jewish one.

Speaking to reporters on Monday before his convention interview, Bennet at first ignored a question about his Jewish identity. Asked a follow-up about whether he was raised Jewish, he gave a one-word answer: “Nope.”