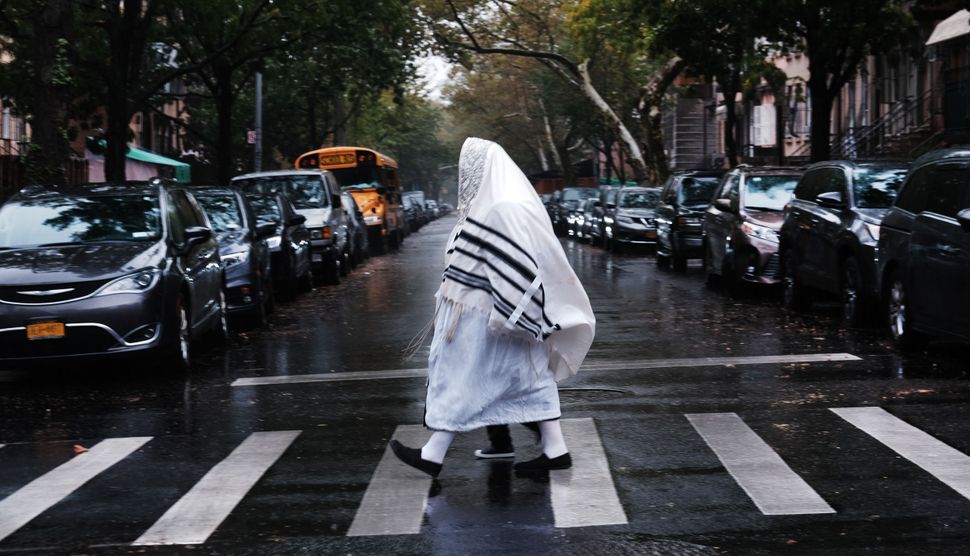 An Orthodox man walking in Brooklyn on Yom Kippur. Image by Getty

A woman slapped three Orthodox women in the space of about thirty minutes in Brooklyn Thursday evening, according to one of them who posted on Facebook about it.

“The sixth such incident since Chanukah began, and we haven’t even gotten past the 5th candle,” the woman, Dalia Shusterman, wrote in a public post suggesting the attacker was mentally unstable. “It’s now almost dawn and the police just called me in for more questioning. Jew hatred is a flippin’ drag.”

Police have recorded at least six anti-Jewish assaults in New York City this week in both Manhattan and several Brooklyn neighborhoods, prompting the city to say it would put more police on the streets. In each of the incidents, the targets were visibly Orthodox Jews. At least three arrests have been made, including of the Crown Heights assailant, according to news reports.

A seventh incident consisted of a verbal threat: On Friday morning, a man walked into the spiritual center of the Chabad Hasidic movement — 770 Eastern Parkway, in Crown Heights — and said he was going to shoot people inside before leaving, local outlets reported. No injuries were reported, and police said the department’s Hate Crimes Task Force was investigating the incident.

In addition to heightened visibility, there will be increased visits to houses of worship and other critical areas in the community.

Anti-Semitism is an attack on the values of our city — and we will confront it head-on.

2019 has been the worst year in recent memory for anti-Semitic incidents in New York City. As of Sunday, the city saw 214 complaints of hate crimes against Jews — representing half of all hate crime complaints in the city — up from 182 in 2018, according to police records provided to the Forward by an NYPD spokesperson.

Another assault occurred on Thursday in the Gravesend section of Brooklyn when a woman was beaten with a bag in front of her young son. The alleged suspect, a middle-aged woman, yelled an anti-Semitic slur at the woman, ABC7 reported.

“You f–king Jew, your end is coming!” the assailant said, sources told the New York Post. A police spokesman told the Forward by email that the woman is homeless.

The majority of the victims have been Haredi Jews who tend to dress in recognizable clothing. Men customarily wear hats and black suits; women wear wigs and skirts or dresses. In 2011, a survey from the UJA-Federation of New York found that there were about 239,000 Hasidic Jews in the immediate New York City area, not including upstate New York and New Jersey, compared with 1.5 million total Jews in the area.

“Right now, anti-Semitism, it’s not being dealt with,” Hikind recently told CNN, echoing comments that other Orthodox figures have made on social media this week.

Binyomin Lifshitz, a spokesman for the Crown Heights Shomrim, a chapter of the volunteer Orthodox patrol group, said that while some are accusing the police of not doing enough, in Crown Heights they have increased patrols and that local Orthodox residents appreciate their visibility in the neighborhood.

“The police department itself, what else can they do?” he said. “People who say ‘Do more’ are people who are reacting to that in the moment, and are not aware themselves of what’s actually being done.”

In a statement Wednesday, New York Governor Andrew Cuomo said he was directing the State Police’s hate crimes task force to assist with an investigation into a recent assault of an Orthodox man near Manhattan’s Grand Central Terminal.

While many of the assailants are struggling with mental illness, according to Lifshitz, some of the assaults are perpetrated by teenagers, such as in a recent November attack, which has led some to speak directly to public school students in Crown Heights. Rabbi Eli Cohen, leader of the Crown Heights Jewish Community Council, has spoken to over a thousand students at several neighborhood public schools on a “listening tour” with Geoffrey E. Davis, an activist and local Democratic party figure.

The attacks in New York City come just weeks after an afternoon of violence surrounding an attack on a kosher grocery store in Jersey City left five people dead, including two Hasidic Jews, the two assailants and one police officer.

OJPAC, a media relations group that uses public records to counter negative stereotypes about Orthodox Jews, called on the New York police to release information about the charges and sentences that assailants in attacks on Jews received.

Authorities in NY & NJ should release a list of all the physical attacks on Jews that took place in 2019, side by side with an update as to the consequences for those attacks. If the consequences are weak, it should be corrected. If they are strong, then let it be known far/wide! pic.twitter.com/5bRnzoMf8t