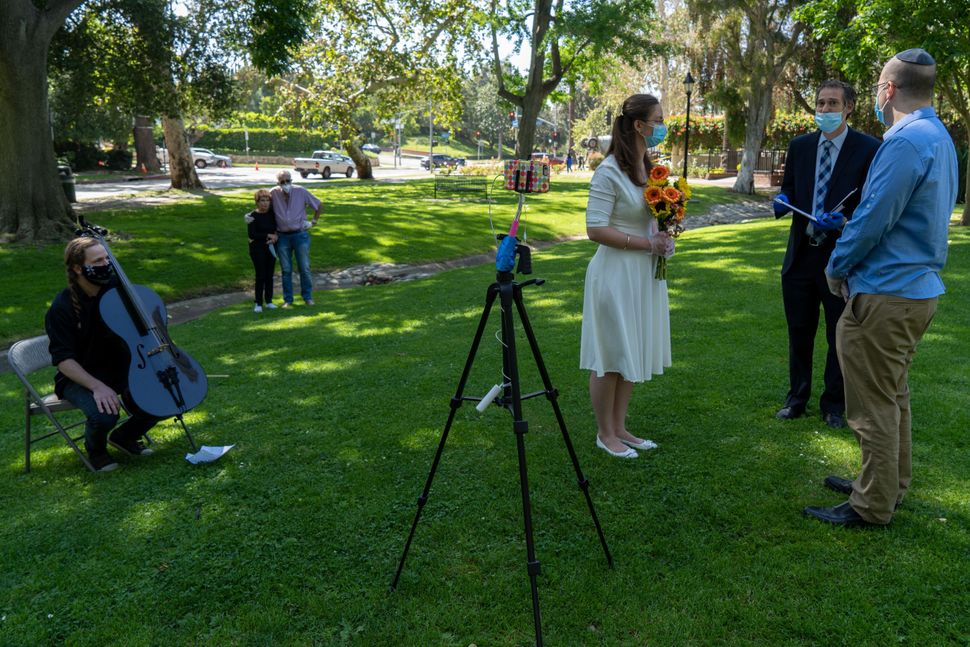 Bella Staav and Jonathan Sunshine arrived at Holmby Park wearing the accessories du jour in the Time of Coronavirus, a face mask and gloves. What set them apart was their formal attire, which had the whiff of a special occasion.

Holmby Park is a verdant oasis in Los Angeles, not far from Beverly Hills, the UCLA campus and Hugh Hefner’s old Playboy Mansion. It’s one of those off-the-radar places Angelenos can still escape to even as L.A.’s more popular outdoor venues are closed to the public. So it was here, on a lush, hilly lawn that the couple affixed an iPhone on a tripod and opened Zoom, providing distant friends and relatives from Canada to Argentina a window onto what was about to unfold. Ten feet away, a cellist began to play Erev Shel Shoshanim (“Evening of Roses”) as a mass of park-going strangers, two witnesses, a photographer and the couple’s rabbi, Sinai Temple’s Erez Sherman — all in masks and gloves — gathered as close as social distancing allowed.

“We have a lot of uninvited guests here,” Rabbi Sherman declared. “Please, join us from afar.”

With both real and virtual audiences looking on, Staav and Sunshine defied the stalemate and uncertainty of a global pandemic and engaged in a radical act of hope: They got married.

“Can we hug now?” Staav, the 28-year-old bride, wondered after the couple exchanged vows. Given the public display, she was careful not to disrespect the strict physical distancing rules implemented by the City of Los Angeles.

Theirs may have been among the only weddings in history not to include a kiss, but as anyone present could attest, the similarities between a typical wedding and this one were few.

Since the couple still plans to celebrate in August, the park simcha was a civil ceremony, not a traditional Jewish wedding. There was no chupah, no hora, no shevah brachot. The groom didn’t stomp on glass, and the only official “guests” were two legally required witnesses. But there was singing, couple-only dancing, a heartfelt exchange of vows and the birkat kohanim, the priestly blessing. There was joy.

As the rabbi struggled to remove the marriage certificate from a sealed envelope, he said, “I’ve never done this with gloves.” 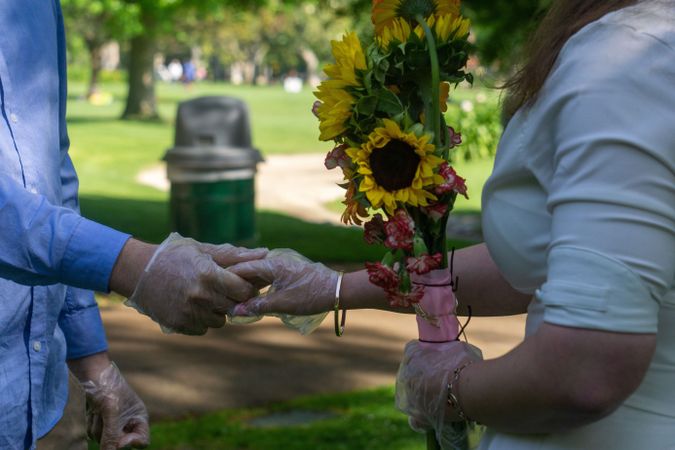 Bella Staav and Jonathan Sunshine in Holmby Park in Los Angeles on their wedding day. Image by Photo by Alon Goldsmith

Such are the trade-offs for couples who wish to proceed with their nuptials during the era of Covid-19, in which stay-at-home orders have made large celebrations among family and friends improbable, if not impossible. And yet, for couples like Staav and Sunshine who are committed to moving forward with their lives despite the restrictions, rabbis are finding creative ways to channel tradition in the most non-traditional of circumstances.

“Until this very moment our rabbinate was almost exactly what I pictured it would be,” Rabbi Nicole Guzik, Sherman’s wife, said when I reached the couple at home to ask how the pandemic was impacting Jewish weddings. “Never in my wildest dreams could I predict I would have to be a rabbi in this fashion. It’s completely throwing us for a loop.”

Guzik and Sherman work together at Sinai Temple in Westwood, one of the L.A.’s largest congregations, which serves an estimated 1,800 families. It is a rare weekend, they said, when they do not perform at least one or two weddings — which, according to Jewish tradition, is how it should be.

“The first commandment in the Torah is peru urevu,” — be fruitful and multiply, Guzik said. “You’re supposed to create a family. So when we talk about putting off a wedding for nine months to a year, you’re really putting the creation of your family on hold.”

I asked what advice they’re dispensing to couples who wish to postpone this milestone.

“We’re trying to determine what’s most important,” Guzik said. “Is it most important to have 350 people celebrating a wedding in person? Or is the priority for two people to declare their love in front of a few people they cherish the most?”

In the case of Staav, who works as vice president of operations and education for the Long Beach Symphony, and Sunshine, a production manager at DreamWorks Animation, the original plan was a March 29 seaside wedding for 100-plus guests in Redondo Beach. On March 7, days before California Gov. Gavin Newsom issued the statewide “safer-at-home” order, the bride’s father, Jack, was admitted to the hospital and diagnosed with grade 4 glioblastoma — a very aggressive brain tumor.

“I was in the ER parking lot, talking to the wedding planner,” Staav recalled. “I said, ‘I don’t know if my Dad’s gonna make it. Maybe we should make March 29 a small hospital wedding.’”

The couple prepared for a bedside ceremony following Jack’s brain surgery on March 13. But a few days later, the global shutdown began and visitors were not permitted to enter the hospital. Less than a month later, on April 11, Jack died.

When the couple reached out to Rabbi Sherman to tell him the news, they mentioned that their marriage license would expire in May. Sherman knew the city had stopped issuing licenses during the shutdown and anticipated a long backlog when things were finally up and running again. Aware that Jewish tradition harbors some anxiety about civil marriage, fearing that couples who are civilly married might forgo a Jewish wedding altogether, Sherman encouraged the couple to go ahead and get hitched. Then he turned to Jewish sources for a precedent. He discovered that in 15th century Spain, when Spanish Jews were suffering under the harsh conditions of the Inquisition and public Jewish rituals were considered dangerous, the rabbis declared a civil marriage a valid Jewish marriage.

“God-willing, we will stand under the chupah soon,” Sherman said at the Holmby Park nuptials.

Sherman and his wife, Guzik, are facing the same dilemma in both their professional and personal lives: Sherman’s sister and Guzik’s brother are both scheduled to be married this summer.

I asked them how they plan to instill these pandemic-era weddings with a sense of hope and optimism.

“It’s simple,” Guzik said. “The couple’s willingness to declare their love and move forward despite the obstacles — that’s the hope and the light.”

The bride, Staav, agreed. “It’s a sad time with the virus and because of what happened with my Dad,” she said. “But there’s also a lot to be grateful for and to celebrate. A big wedding is just a cherry on top; it’ll happen when it happens. The beauty of our marriage is happening right now.”

So instead of a glamorous honeymoon, the couple will return to their one-bedroom apartment and continue to shelter-in-place.

“It’ll be more of the same,” Sunshine admitted. “But the same is already so beautiful with Bella.”

At the conclusion of their civil wedding, the couple sat in the park and drank champagne. A pair of admirers who had watched the wedding stopped by, wished them mazal tov, and gave them a coveted wedding gift: a 12-pack of toilet paper.