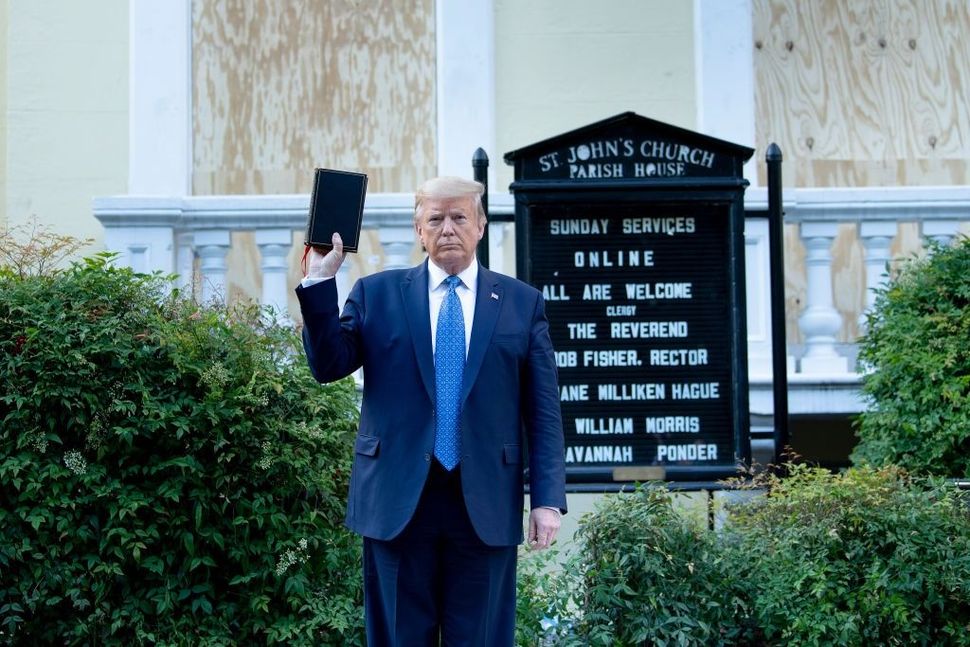 President Donald Trump holds a Bible while visiting St. John’s Church across from the White House after the area was cleared of people protesting the death of George Floyd June 1, 2020, in Washington, DC. Image by BRENDAN SMIALOWSKI/AFP via Getty Images

When President Donald Trump held a Bible aloft — and upside-down — in front of St. John’s Episcopal Church on Monday night, it was just the latest example of how he and his religious supporters have used the holy book as both a crutch for support and a cudgel to attack opponents.

In this case, the target was the people rioting and looting in American cities — and the gesture was particularly controversial because the U.S. Park Police and National Guard broke up a peaceful demonstration in Lafayette Park to clear Trump’s path to the photo-op.

“What’s interesting about what he did yesterday — and it’s not at all new for him— is he had the document as a kind of physical icon,” said Professor Jacques D Berlinerblau, Rabbi Harold White Chair in Jewish Civilization at Georgetown University and author of Thumpin’ It: The Use and Abuse of the Bible in Today’s Presidential Politics.

“He doesn’t seem to have any scriptural knowledge, any serious commitment to scriptural study, any recognizable credential as a person of faith,” he added. “To put it bluntly, the text became an idol.”

The Rev. Mariann Budde, the Episcopal bishop of the Washington diocese, whose jurisdiction includes St. John’s, called Trump’s promise to crack down on demonstrators around the country “antithetical to the teachings of Jesus.”

The Rev. James Martin, a prominent Jesuit priest and author, tweeted that Trump’s action was “revolting,” saying: The Bible is not a prop. A church is not a photo op. Religion is not a political tool. And God is not a plaything.”

And former Vice President Joe Biden, the presumptive Democratic presidential nominee, said in a Tuesday speech: “The president held up the Bible at St John’s Church yesterday. I just wish he opened it once in a while, instead of brandishing it.”

As in previous such situations, Trump’s religious supporters generally praised the gesture.

“I thought he was making a statement he wasn’t afraid to go out,” said Steven Strang, publisher of Charisma, the nation’s largest Pentecostal magazine. “And he was going to a church, so why not take a Bible?”

Compared to other conservative Republicans, like Sen. Ted Cruz of Texas, Trump came relatively late to Bible thumping, although he says Scripture was part of his life from a young age. The televangelist Paula White, the president’s main spiritual backer, wrote in her recent memoir that Trump told her back in 1999 that Norman Vincent Peale, whose sermons he heard at the Presbyterian church his family attended, “has to be one of the best storytellers and orators to ever get behind a pulpit, the way he makes the Bible come alive.”

Trump’s adultery and other character concerns made him a tough sell to many evangelicals during the 2016 Republican presidential primaries, where his opponents included Cruz, the son of a preacher. He knew religious conservatives were a key constituency, and he regularly used the Bible as a symbol to reach out.

In August of 2015, at a campaign stop in Birch Run, Mich., Trump named the Bible as his favorite book, adding that his own Art of the Deal was a “deep, deep second.”

“Nothing beats the Bible,” said Trump, who took to calling himself a “proud Presbyterian” on the campaign trail, albeit one who rarely attends church services.

A month later, at the podium at the September, 2015, Values Voter Summit, Trump held up a Bible his mother gave him when he was 10. (It was one of two he later used when he was sworn in as president.)

Trump had the same Bible in hand when he addressed the Iowa Faith and Freedom Coalition Forum in Des Moines, that month.

Unlike many Republican — and Democratic — politicians, Trump rarely quoted Scripture in his campaign appearances. And the appeal to evangelical leaders and grass supporters did not always go smoothly.

During a January, 2016, campaign stop at Liberty University, Trump was asked about a favorite Biblical citation, and he said it was from “Two Corinthians,” instead of the standard formulation, “Second Corinthians.”

Republican rivals called it was a typical late-comer, opportunist gaffe. But Trump’s growing number of evangelical supporters – most, like White, from the Pentecostal wing – leapt to his defense, saying that the error was trivial.

“The flap about Second Corinthians or Two Corinthians is a minor slip of the tongue,” said Strang, the Charisma magazine publisher, who has written four books supporting Trump.

In April of 2016, Trump told a Christian radio host that his favorite Scripture verse was from the Hebrew Bible, Exodus 21:22-25, about “an eye for an eye.” which, Jonathan Merritt, a Southern Baptist minister, wrote, in the Atlantic, he misunderstood.

“The Republican front-runner can cite his favorite verse—but, embarrassingly, he has no idea what he’s talking about.”

As in the 2016 campaign, Trump rarely quotes Scripture as President, which does not seem to trouble his evangelical supporters. But White says he regularly attends Bible studies, and he does continue to boost the Bible as a book. .

In January 2019, after a “Fox & Friends” segment on the issue, he tweeted: “Numerous states introducing Bible Literacy classes, giving students the option of studying the Bible. Starting to make a turn back? Great!”

Monday’s photo-op was quickly criticized by Trump’s adversaries — and even some of his usual supporters.

Sen. Tim Scott of South Carolina, one of the most prominent black Republicans in the nation and a Trump stalwart, told Politico that he opposed breaking up the Lafayette Square demonstration to clear a path for Trump.

“If your question is, should you use tear gas to clear a path so the president can go have a photo-op, the answer is no,” he said.

Frances Fitzgerald, author of The Evangelicals: The Struggle to Shape America, said the stunt fit into a clear pattern.

“Trump, like much of the Christian right, uses the Bible to further his own interests,” she said. “I doubt that he has ever read it, but those who do interpret it as they chose.”

Mark I. Pinsky, a freelance journalist based in Orlando, Fla., is the author of A Jew Among the Evangelicals: A Guide for the Perplexed.