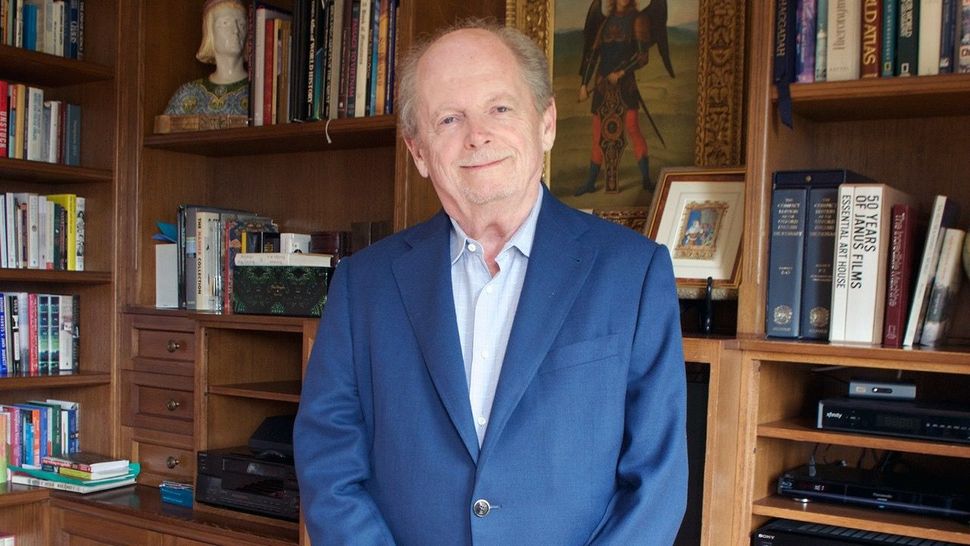 Psychedelics gave George Sarlo insights that brought him closer to his Judaism and eased his depression. (Photo/Courtesy Sarlo)

After his father disappeared to a forced labor camp in 1942, when George Sarlo was just 4 years old, it left a traumatic wound that would not heal for the next 70 years.

Then, when he was in his 70s, Sarlo had a life-changing experience. After ingesting a psychedelic native plant in a Mexican fishing village, Sarlo says he had an encounter with his dead father, who finally provided an answer to the question that had plagued his son for so many years: why he’d left without saying goodbye.

That experience eight years ago has today made Sarlo, a successful San Francisco venture capitalist and philanthropist, an unlikely advocate for the use of psychedelic drugs to treat trauma, addiction, and the fear and anxiety that can accompany a diagnosis of terminal illness.

Sarlo, 82, shared his story last November at Congregation Emanu-El, explaining how his father leaving without saying goodbye had haunted him for 70 years — nearly his entire life. Many of those listening were brought to tears.

Born in 1938 in Budapest, Sarlo was one of two children; his sister was seven years older. When the Hungarian government began passing anti-Jewish laws, Sarlo’s father lost his job as a clerk in a textile mill. Friends allowed him to buy remnants of fabric from the mill, and he and Sarlo’s mother, a talented seamstress, began sewing women’s lingerie that his father would sell to dealers. They earned a decent living, until his father had to report for deportation to a labor camp. He left early one morning and never returned.

For the next three years the family moved around, living in fear and dread that the Nazis could deport them — something that happened to their entire extended family, none of whom survived.

To make sure the same did not happen to her small family, Sarlo’s sister risked her life, sneaking out of the house to the Spanish Consulate, where she obtained lifesaving documents. Issued Spanish passports and papers, they spent the last three months of the war in a Budapest apartment with some two dozen others under the official protection of the Spanish government. Sarlo calls his sister “the hero of the family.”

When the war ended, Sarlo remembers a box arriving with warm clothing, Hershey’s chocolate and chewing gum. It came from the Joint Distribution Committee.

“My mother could not believe that somebody who didn’t even know us sent us all this,” said Sarlo. “The idea of philanthropy was never explained to us.” Being the beneficiary of such philanthropy at a pivotal point in his life would have great influence years later, when he was in the position to give back himself.

After liberation, Sarlo’s family stayed in Hungary and Sarlo entered the Technical University of Budapest in 1956, the year of the short-lived Hungarian revolution against Soviet control. Sarlo took part in the conflict, putting himself and his family in danger. His mother advised him to flee the country with his sister, his sister’s husband and their 2-year-old son. She had remarried another survivor and they would stay in Hungary.

Sarlo carried his 2-year-old nephew during much of the escape. His backpack and a scarf from his mother that he wore while sneaking through a minefield and around electric-charged fences are now in an exhibit on refugees at the Smithsonian Museum.

They made it to Vienna, where they hired someone to smuggle Sarlo’s mother and husband out of Hungary, and eventually the whole family made it to America, where they were received by the Hebrew Immigrant Aid Society. Sarlo was 18, and the very next day he was working as a draftsman at an engineering firm.

Sarlo’s trajectory is a real immigrant success story. He attended the University of Arizona on a full scholarship and then went to Harvard Business School. He made his first million dollars within three years, working on Wall Street. He was a founder of the first venture capital firm investing in Silicon Valley and in 1973 founded his own firm, Walden Venture Capital.

His first foray into philanthropy was with the International Refugee Committee, as Sarlo identified strongly with the plight of refugees, having been one himself. He also remembered the JDC box his family received in Hungary, and he eventually joined its board as well.

For many years Sarlo remained distant from his Judaism, but the connections began to build.

In the early 1990s, he accepted an invitation from local philanthropist Warren Hellman to join a Torah study group.

In 1992, he founded the George Sarlo Foundation and asked Phyllis Cook, then endowment director of the Jewish Community Endowment Fund at the S.F.-based Jewish Community Federation, to sit on his board. In time, she asked him to start a fund with the Federation.

The George Sarlo Foundation primarily funds mental health initiatives, with a major focus on addiction and early childhood trauma. Another focus, on psychedelics, brought Sarlo some notoriety after he was featured in an article in The New York Times last fall talking about funding research of psilocybin and MDMA. Given his own experiences, he has come to believe that even one guided experience with psychedelics as an adult can heal trauma or PTSD.

It was that 2012 trip to Mexico that convinced him of the healing power of psychedelics. At the recommendation of a fellow Hungarian Holocaust survivor and therapist friend, Sarlo went there specifically to take ayahuasca, a plant-medicine commonly used for rituals and healing by Indigenous people in Peru and other South American countries.

It was not a decision he made easily — “You want me to go where and do what?” was his first response. But his friend, who had been using psychedelic therapy to treat addiction and trauma, made a persuasive argument.

In the second of two “journeys” with the substance, which is taken in a sacred ceremony led by a shaman, Sarlo says he had a conversation with his long-dead father, who told him that the reason he didn’t say goodbye was because he thought he was clever enough to get out of any situation, and that he’d return home by the time his son woke up.

“It’s a simple explanation and it fit,” said Sarlo. “Slowly, the low-grade depression I had experienced for most of my life lifted and never came back. And I decided I wanted to help give this incredible gift to as many people as I can manage.”

Sarlo credits psychedelics with more than curing his depression. They also played a role in bringing him back to his Judaism.

During another psychedelic exploration, this time on psilocybin mushrooms, he had what he describes as a confrontation with God. In this particular vision, he saw God as male (though he’s seen her as female too). God asked Sarlo why he had turned away, and Sarlo pointed to the Holocaust and the loss of his extended family.

“The greatest gift I gave to humanity is free will,” he says God told him. “But then along comes Hitler. What was I supposed to do? Drown him? What about the runaway car about to hit a child? Am I supposed to save them all? You can’t have it both ways.”

“Now that’s an explanation I had heard before, but it didn’t register,” Sarlo said. “This time, it registered.”

Sarlo married and divorced twice and had two daughters. Neither wife was Jewish; he believes he subconsciously chose to marry non-Jewish women so his children wouldn’t be Jewish and therefore would be safe — though of course in the Holocaust that wouldn’t have mattered.

In the end, both of his daughters married Jewish men. Two of his grandchildren had b’nai mitzvahs and the third had a Jewish rite-of-passage ceremony.

“It’s hilarious, because it shows God has a sense of humor,” is how Sarlo explains it.

“George Sarlo had experienced this big healing within himself, a tikkun,” said Rabbi Sydney Mintz, who moderated the conversation last fall at Emanu-El. “He could have just done this and thought ‘It’s my own thing and I’m healed,’ and that would have been acceptable, but he wants to share this with people; it’s transformed him into a teacher.”

Sarlo has been working on a book to be published this summer with MAPS, the Santa Cruz-based Multidisciplinary Association for Psychedelic Studies, but the pandemic and the presidency of Donald Trump has made him feel a level of fear he had hoped never to feel again, he said. He’s now revising the original manuscript.

“There are some difficult times coming,” he said, “and I’m not even sure that the species can survive without some change.”

But he seems to have found peace within himself. “I think that because of my experiences, both in Judaism and with psychedelics, I’m a much better father,” he said. “I’m a much better grandfather and better friend. And I’m better to myself.”

This story first appeared in Jweekly.com. Reposted with permission.