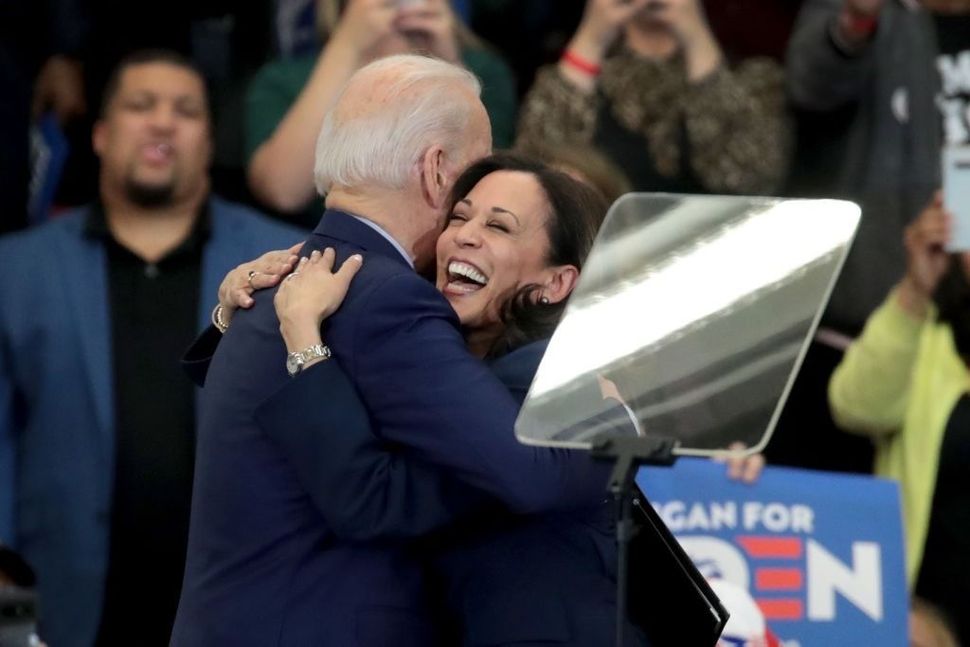 The Villages is a sprawling Florida retirement community about halfway between Orlando and Gainesville. It has a small Jewish population, and its residents tend to lean Republican. But Democratic presidential candidate Joe Biden’s campaign is thinking that this year, it might be able to win them over.

A Biden commercial, featuring a Village resident disturbed by Trump’s handling of the pandemic, began airing in Central Florida on Aug. 4.

By focusing on the coronavirus pandemic and other domestic issues — but not ignoring Israel altogether — Democratic strategists and activists are trying to hone in on the state’s 450,000 Jewish voters in a way that swings the Sunshine State’s perpetually-narrow margins in their favor. Republican Jewish activists, on the other hand, plan to make Israel the centerpiece of their strategy.

In 2008 and 2012 Obama narrowly carried the state and won the election. In 2016, Trump won the state by an equally narrow margin.

In these contests, Jews have voted Democratic by steep majorities — between 66% and 75% — or more. Yet the key question lies in that range. At the high end, Democrats tend to win Florida’s 29 electoral votes, U.S. Senate seats or the governor’s mansion, said Ira Sheskin of the University of Miami, a widely respected demographer of American Jewry. At the lower end, Republicans do.

Cathy Lieblich, a precinct committeewoman for the Orange County Democratic Party, said her outreach on behalf of the campaign will emphasize the alignment between Jewish values of justice and charity and progressive Democratic policies.

This year, that strategy might work, said Sheskin, especially because of the pandemic.

“COVID-19 is the top issue for everyone at the moment,” he said, adding that half of the Jewish population in Florida is 65 and older, he said.

The state’s Democratic, Jewish Commissioner of Agriculture and Consumer Affairs, Nikki Fried, might be able to boost Biden’s credibility on the coronavirus issue. A political neophyte, the 43-year-old lawyer from south Florida won her 2018 race narrowly, but has gotten a lot of attention for her work on the pandemic.

In the face of Republican Gov. Ron DeSantis’ refusal to issue a statewide order mandating the use of masks, Fried launched her own ad campaign urging people to use them.

“Her focus on the pandemic is critical, and since enough Floridians voted for her, she should play a role in this state in winning votes for Biden,” said Nancy Wolf, of Lake Mary, a longtime Democratic and Planned Parenthood activist.

There are, to be sure, Florida voters who make their decision based on a single issue, such as support of the current government in Israel, said Lieblich, the precinct committeewoman in Orange County.

The Republican Jewish Coalition’s top priority is finding them and getting them to turn out to vote, said communications director Neil Strauss — “as close to 100 percent” as possible. Next, they’ll turn to independents, and relatively uncommitted Democrats.

The RJC plans to tout Trump’s recent role in brokering the agreement with the UAE, as well as his support for the policies of Israeli Prime Minister Benjamin Netanyahu’s Likud party; they will also attempt to associate Biden with Reps. Alexandria Ocasio-Cortez (NY), Ilhan Omar (MN), Ayanna Pressley (MA) and Rashida Tlaib (MI) — Democrats and members of “The Squad” who are sharp critics of Israel.

“President Trump has made Israel’s security a top issue,” Strauss said, by moving the U.S. embassy to Jerusalem and opting out of the Iran nuclear deal.

Sheskin, however, said there’s just not enough Jews in Florida who vote on Israel to give the Republicans that crucial margin. Maybe 15 percent of Florida Jewish voters “will let Israel persuade them to pick Trump over Biden,” he said. Other Florida Jews might vote Republican out of economic self-interest.

To be sure, Florida’s voters need Biden to speak about Israel, and he shouldn’t ignore it, Sheskin said.

Biden’s also known for his support for Israel compared to Hillary Clinton, who, as Barack Obama’s secretary of state, was sometimes caught in the crossfire between the president and Netanyahu. The new Democratic party platform’s Israel plank supports a two-state solution and continued recognition of a unified Jerusalem as capitol of Israel. It opposes the Boycotts, Divestment and Sanctions (BDS) movement. Biden’s newly announced vice-presidential pick, Kamala Harris, also supports a two-state solution.

But Strauss said Biden hasn’t “stood up” to pro-BDS Democrats — that’s Tlaib and Omar — and that will hurt him with Florida’s Jewish voters.

Fried is also known as a supporter of Israel, having visited and studied there three times before entering politics, said Geller, and her support also strengthens Biden’s position.

“There seems to be a standard formula for politicians courting the Jewish vote: talk about Israel,” said Rabbi David Kay, of Congregation Ohev Shalom in Orlando. “That’s certainly a crucial issue for American Jews. Yet it’s a mistake, I believe – both for Jews and for candidates – to make it the only issue.”