Portland’s Jews know their state’s racist history. Now the chaos has some beefing up security. 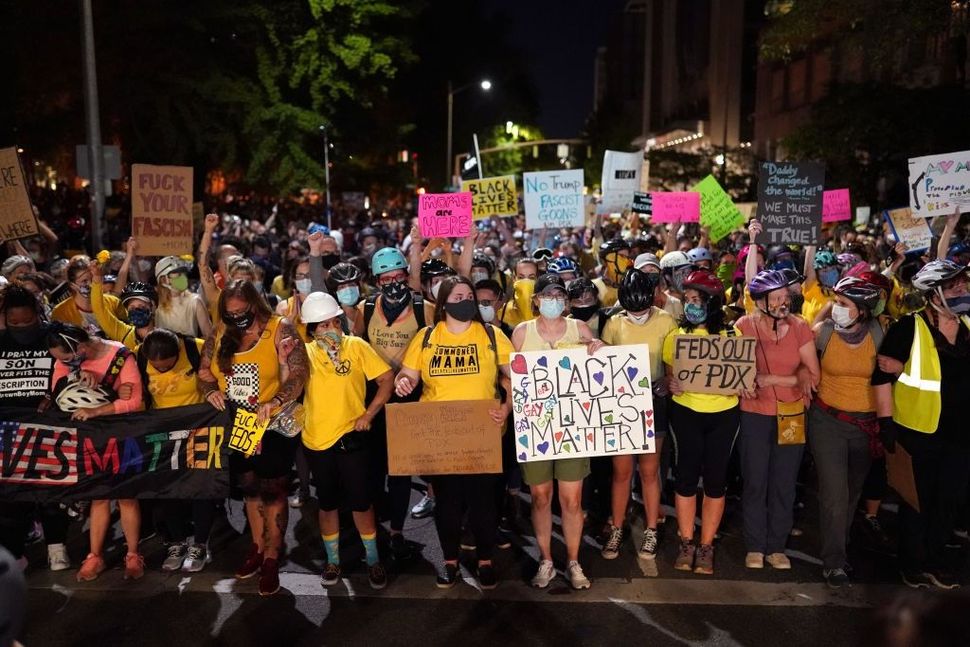 Some of Portland, Ore.’s Jews are a part of the protests. Others are horrified by them. Image by Getty Images

No one knows better than Portland, Ore.’s Jewish community that their state has a history of racist hate — indeed, that it was founded by white supremacists.

As the state grew, it evolved into a place of extremes on both left and right. Now, those groups are confronting each other directly, on a daily basis, in the city that’s the center of the state’s Jewish population.

While many rabbis say their congregations support peaceful protest and deplore systemic racism, there’s also a lot of fear, and talk of increased security.

“You get out of the city, you get to red country, you really see the red-blue divide of America here,” said Rabbi David Kosak, a New York native who arrived in Portland just years ago to lead the Conservative Neveh Shalom synagogue. “You have a very liberal, far-left enclave city, a homelessness crisis, a global pandemic, Black Lives Matter and a terrible history of racism.”

Jews have been living in Portland since 1849; the big names include an early mayor, Bernard Goldsmith, who served from 1869 to 1871, and “Soda Pop King” Louis Albert.

Yet last year, a swastika was emblazoned on a tree at the high school Kosak’s son attends, and a b’nai mitzvah student of his was told by a classmate that Jews should be “incinerated.”

Brittany Rosenthal is a student and a native Portlander who’s been active in the protests. She sees the state’s struggle as part of a broader issue: “We have a problem with white supremacy, but it’s not just here in Oregon. I think it’s everywhere and that’s really scary.”

Kosak’s congregation of roughly 2,000 members includes both marchers and people who are horrified by what’s happening downtown because that’s where they make their living.

In the Orthodox Kesser Israel community, consisting of 125 families, several family businesses have been badly damaged and looted by violent protesters, said the synagogue’s rabbi, Rabbi Ken Brodkin. Some community members are vacating downtown office spaces to move to another part of the city.

“We support peaceful protest, but obviously destruction and violence are not the ways to solve issues in our society,” said Brodkin. “It speaks to some of the problems that are plaguing this country. That’s why Portland has become this focal point.”

“While there has been a lot of activity in parts of downtown, the huge majority of Portland’s Jews do not live in downtown and are not engulfed in chaos,” he said. “We are no more on edge than anyone else living through this pandemic.”

Yet the Orthodox synagogues, which are having in-person services, do feel compelled to invest more in security right now. Brodkin said it’s necessary for his synagogue, because Portland’s law enforcement is stretched thin.

“When we’ve got far-left and far-right, that’s dangerous, because one thing they’ve got in common is opposition to the Jews,” Brodkin said.

Both Jews and Black people have suffered in Portland, said Rabbi Ariel Stone, referring to a highway that was built through both communities. A leader of the Shir Tikvah synagogue and a frequent demonstrator.

Stone said that the memory still lingers of how, in the early 2000’s, the local Jewish community went through an arduous process in trying to construct a Holocaust memorial. A white community nearby said it should be located near the train tracks.

“There’s a fair amount of indifference and even callousness here towards marginalized communities,” she said.

Rabbi Motti Wilhelm, a rabbi in the Chabad-Lubavitcher movement, is grappling with several problems. His building caught on fire twice in August. The first was thought to be electric, according to Oregon Live. The second destroyed the building; both fires are under investigation, Wilhelm told the Forward.

Wilhelm has also increased security for his congregation, in advance of their in-person services for the High Holidays, and saw that his teachers received active shooter training.

“I don’t want to be alarmist,” he said, “but we have an obligation to respond responsibly when things happen.”

Portland’s Jews know their state’s racist history. Now the chaos has some beefing up security.