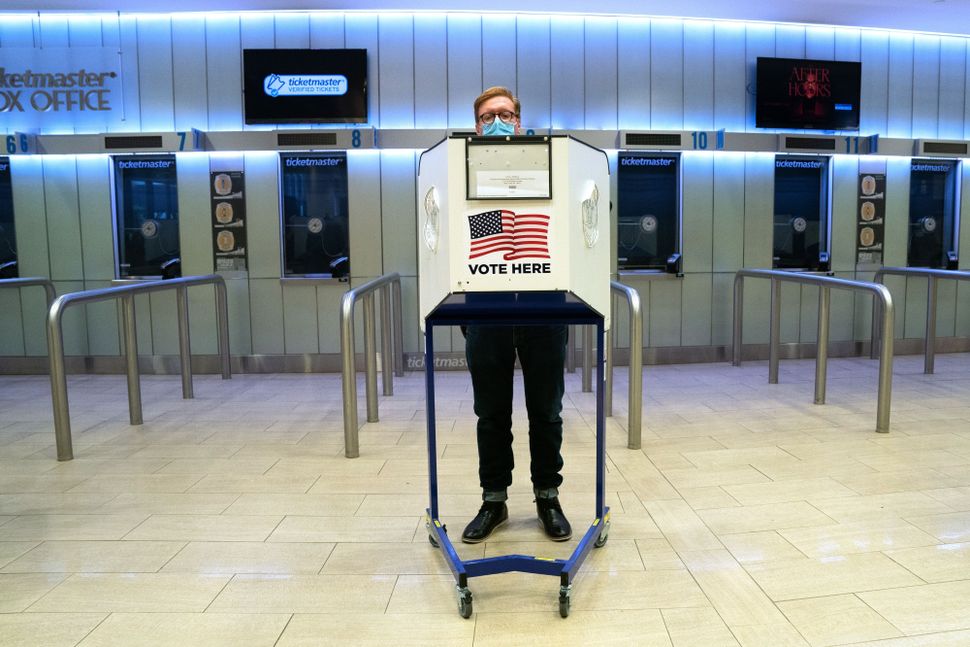 It’s Election Day in the Goldene Medina, the Golden Land dreamed of, embraced and railed against — often, simultaneously — by Jewish Americans.

Jews have been here for all the elections, and every election must have felt as important as this one. But we can acknowledge that and also know that this one is different. Whether one loves him, as about a quarter of American Jews do, or hates him, nobody can deny that President Trump is something altogether new, a kind of resetting of our collective clock.

So we invite you to spend election day with us as we gaze around the country, at political races of Jewish interest, but also at how we are voting, living, feeling.

Today, Mandy Patinkin and his wife Kathleen Grody beamed in from their home as they have been throughout the election, urging followers to keep phone-banking and discussing what might happen after polls close. Patinkin pointed out that definitive results may come late at night — a problem for him, since he hits the hay at 8 p.m. — or sometime in the coming weeks.

“What’s really important is to listen to reputable news sources for the final outcomes and not get caught up in the minute-by-minute shifting results,” Patinkin said. He added, “State-by-state vote counts often take many days after the election to be counted and certified. Nothing is going wrong if that’s the case.”

Montgomery County is home to many of Philadelphia’s Jewish voters — total Jewish population of 84,000+ according to the local federation and crucial area for Biden to run up the score. https://t.co/berX0yPPU3

Josh Malina, a veteran of political dramas “The West Wing” and “Scandal,” hopped on a Zoom call to thank real-life volunteers for the Jewish Democratic Council of America.

Malina said Joe Biden is the only candidate who represents Jewish values like tikkun olam, or repairing the world.

“Thank you for making me believe again in the kind of public service and volunteerism that ‘The West Wing’ always lauded,” he said.

.@JoshMalina thanks #JewishDemsInAction for all of our work to restore hope and decency to the West Wing with @JoeBiden.

“Everyone who has volunteered to phone bank has inspired me…so thank you for dedicating the final hours of a momentous election to this vital work.” pic.twitter.com/d8X8Q6hLlF

A tweet by Rabbi Danya Rutenberg keeps racking up the likes. It shares a traditional prayer for the U.S. Government, authored by Rabbi Louis Ginzburg in the 1920s.

Our God and God of our ancestors: We ask Your blessings for our country – for its government, for its leaders and advisors, and for all who exercise just and rightful authority.

There’s some anxiety out there. Some are focused on the probable long wait for election results.

Rabbis and Jewish groups are urging everyone to be patient, as the final result in the presidential race might take a while due to higher rates of early and absentee voting — the result of the coronavirus pandemic.

“We wandered in the desert for 40 years,” Rabbi Shira Stutman of Sixth & I in Washington, D.C. said in a video produced by T’ruah. “We can wait a few weeks to get our election results.”

There are several groups in a progressive coalition called Protect the Results that seeks to mobilize voters “if Donald Trump undermines the results of the 2020 presidential election.” The Reform Movement is also calling on secretaries of state not to certify election results until all votes are counted.

Others are monitoring the problem of online disinformation, which has the potential to undermine election integrity, and is also often inflected with antisemitism.

“Is anyone surprised by all the technical issues happening across America when George Soros’s company manufactures the majority of the voting machines in America?” said one conspiracy theorist on Twitter.

The rumors, started in 2016 and spread by social media users and by some blogs, have been popping up with more frequency after a press conference Tuesday morning from senior officials at the Cybersecurity and Infrastructure Security Agency and the Department of Homeland Security, who said some electronic voting systems in Ohio, Georgia, Missouri and New York were experiencing “typical challenges” but that the “election infrastructure is resilient.”

Soros does not own or control any voting machines, and there is no indication that problems with voting machines will impact local and state officials’ abilities to tally votes.

At the Tomb of the Patriarchs in Hebron, a group of Israeli settlers prayed for a Trump victory in the November 3 election in a service Monday.

Among the settlers was Marc Zell, the head of Republicans Overseas Israel.

“Hebron is the first capital of the Jewish people and the burial place of our founding fathers and mothers,” Zell said in an interview with Breitbart. “What better place is there to kind of, congregate and be thankful for all the wonderful things that Trump has done for us the past four years?”

Correction, Nov. 4, 12:36 p.m.: A previous version of this story incorrectly identified T’ruah as a part of Protect The Results.