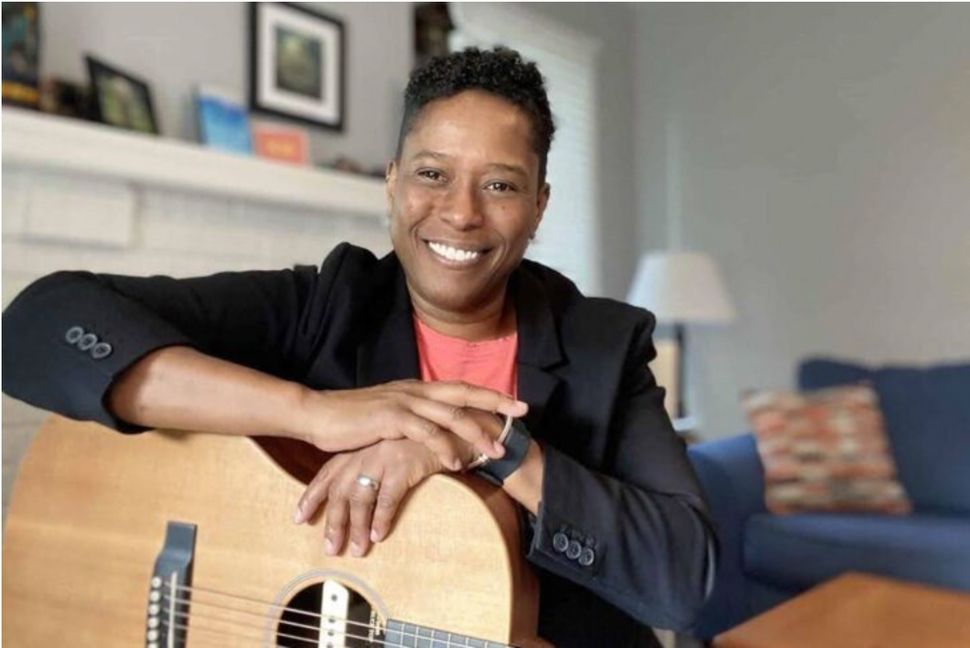 Rabbi Sandra Lawson remembers the first time she was introduced to the Torah. She was a junior in college and took a course on the five Books of Moses with a charismatic professor. Lawson initially enrolled in the course to fulfill a humanities requirement, but by the end she had a new perspective on religion.

Post-college, Lawson spent most of her 20s in the army as a military police investigator. After leaving the military she moved to Atlanta, where she says her life “became incredibly Jewish.” She had many Jewish clients through her personal training business and was in a relationship with a Jewish woman at the time. Lawson went to family Shabbat dinners where she became fascinated with ritual and the more leisurely pace of those Friday nights.

Lawson also met her mentor and friend, Rabbi Joshua Lesser, at that time. Lesser was a training client of Lawson’s. The two grew close, and Lawson peppered him with questions about Judaism. She eventually took him up on his offer to attend a service at the synagogue he led, Congregation Beit Haverim. Lesser’s sermons impressed Lawson, and the community was notably welcoming. She began to think about becoming Jewish and, in 2004, she “officially entered into the Jewish covenant” the day before her 34th birthday.

Lesser continued to inspire Lawson on her Jewish journey, and she applied to his alma mater, the Reconstructionist Rabbinical College. (I briefly met Lawson in 2015 when I was visiting Israel and she was living there as part of her rabbinical studies.) She graduated in 2018 as the first Black, female, openly gay rabbi in the world.

Lawson is one of three honorees at Keshet’s event on Thursday, Nov. 18. As the associate chaplain for Jewish life and Hillel educator at Elon University in North Carolina, she will be lauded as a distinguished activist, community builder and innovative educator.

Rabbi Sandra Lawson remembers the first time she was introduced to the Torah. She was a junior in college and took a course on the five Books of Moses with a charismatic professor. Lawson initially enrolled in the course to fulfill a humanities requirement, but by the end she had a new perspective on religion.

Lawson recently spoke to JewishBoston about her activism, her work with college students and her music.

We need to move beyond origin stories of converts, especially those of us who are Jews of color. It seems to be a curiosity that the majority of white Jews need to understand; it’s not necessarily important to me or relevant to my current Jewish experience. Many Jews of color are tired of the same questions of, “Tell me how you came to be Jewish.” One of the reasons I’m saying this is that my story is totally Google-able. If you want to know more about me, asking that question won’t help you learn more about me. It’s just going to tell you that I converted.

You’ve written about your identity as a Jew of color, as well as your other identities. How do those individual identities make up the whole self?

As an openly queer person, I’m still making decisions about how I out myself or how I casually inform people that I’m gay; not that I’m hiding it, it’s just that I recognize that sometimes it’s not the safest thing to do. Many Jews decide about outing themselves as Jews. As a Jewish person who may be brown or Black or Latinx, they may grapple with how to bring their full selves into spaces that are typically Ashkenazi normative or white normative. Anything that doesn’t fit into that model, like bagels, for example, can be seen as not authentically Jewish. We uplift a narrative of Ashkenazi heritage in our country, or Ashkenazi practice.

There are Jews of color who strongly identify as Jews of color but don’t feel like the Jewish center is a space for them, or it’s not necessarily a space they want to spend their energy. They still identify as Jews and still see me as their rabbi, but that may mean I have to go to them rather than have them come to me.

Let me be clear. You are either racist or anti-racist. Those are the two choices. The latter meaning you are working everyday either emotionally or physically to dismantle the racisim that we all have been taught since day one in the United States.

That tweet has probably gotten the most attention of anything I’ve ever tweeted. We are moving away from this idea of, “I’m not racist.” Yet the United States of America was designed, from its inception, to benefit one group of people over another group of people. At the time, that meant the country was white and British. Over time, other European groups were allowed into that privilege of whiteness. Eventually, Germans, Italians, Irish and, at some point, Eastern European Jews, were allowed into whiteness.

When Christopher Columbus discovered that this vast “empty” land had millions of people in it, our country spent a good part of its beginning trying to wipe Native Americans off the face of this land. Black people were brought here as chattel slavery property, with no rights as humans. Women didn’t have the same rights as men. Every single marginalized group fits into this. That means that our society from the beginning has been racist, homophobic, xenophobic and sexist. We have to constantly work hard not to be sexist, not to be racist.

As far as racism goes, this means you’re either racist or you’re anti-racist. There is no middle ground of being not racist. You’re not doing anything to dismantle the system that exists to privilege one group of people over another. As far as Jews are concerned, I recognize that Eastern European Jews were not seen as white. But whiteness evolves, and other groups have been able to benefit from white privilege. So, if you are a Jew, coded as white or seen as white, yes, you can have white privilege and you can also suffer antisemitism. Both of those things can exist at the same time.

I’d like to switch gears and ask how music came to be a feature of your rabbinate.

Music is something that I’ve always been inspired to do. Like a lot of kids with the hairbrush as a microphone, I imagined myself in some way, shape or form as a rock star. I never put any energy in that direction, but I’ve always had this fascination with trying to learn how to sing and play guitar. I’ve taken lessons here or there to try to learn something, but it never really stuck. When I went to rabbinical school, music became a way for me to learn Hebrew. Hebrew is rhythmic, and you can sing-song it. Music also gave me access to praying. I can read the prayers, but if I can find an entry point into understanding what the prayers mean in my heart, music has been really good for that. Music has also allowed me to explain some challenging things that I’ve experienced, and I can express myself in ways that I can’t really do in a speech.

Music also gets me out of my head and into my heart. I’m grateful that we sing or chant most of our prayers because the more you sing, the more your heart is open. So, for example, our morning liturgy is all about gratitude. We say, “Thank you, God.” Or I take upon myself the blessing from our creator to love our neighbors and love myself. I say thank you for restoring my soul, breathing life into me. And I translate the last part as, “God is awesome.” Those songs are about gratitude before we even get to the call to prayer.

How does music influence prayerful intentions?

We sing these songs and pray these songs to open our hearts so that when we get the call to prayer, we are open to receiving whatever the Divine has for us. We get whatever we need to receive at that moment before we get to the Amidah. To feel the Amidah, our hearts have to be open to pray openly and full. That’s how I feel about music. Even though I didn’t start out to be a rabbi with a guitar, and I will probably never be a rabbi who holds a guitar through the entire service and uses it for everything, I do use it in the parts where I feel it is necessary. It’s helped me open up, and in this weird virtual world, to connect with people. One of the challenges I’ve often had with the guitar in a prayer service is I have often seen it as a barrier to connection, where online, it’s almost the opposite. It’s a way for me to connect with people.

Judy Bolton-Fasman is the arts and culture writer for JewishBoston.com. Her essays and articles have appeared in The New York Times, The Boston Globe, The Forward, Tablet Magazine, The Jerusalem Report, Cognoscenti and other venues. Email her at judy@jewishboston.com.

This article originally appeared on JewishBoston.com and has been republished with permission.