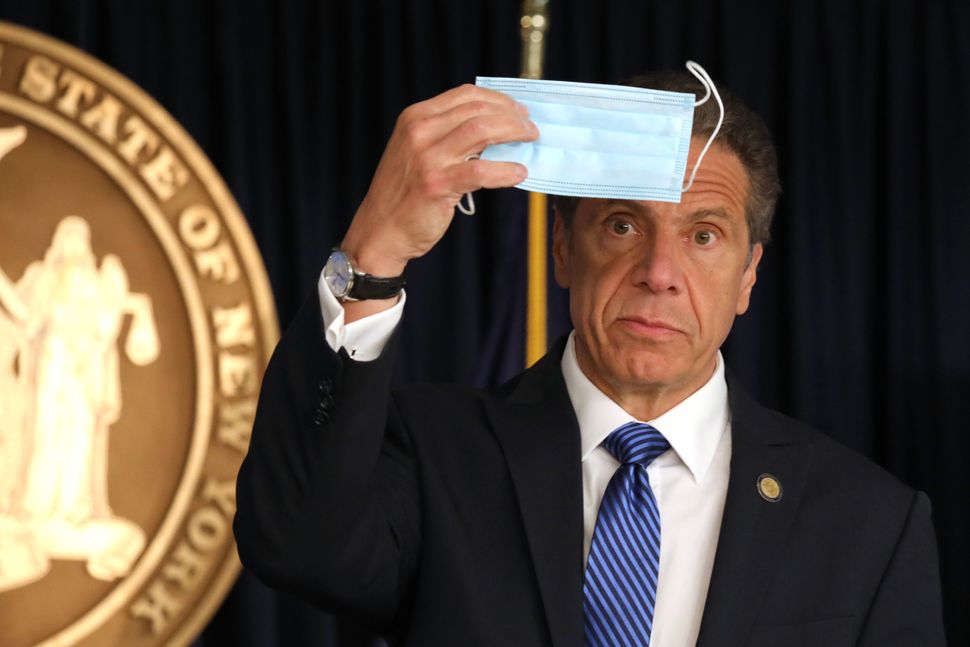 Agudath Israel of America is asking the U.S. Supreme Court to block New York State Gov. Andrew Cuomo’s restrictions on houses of worship on the grounds that they might be unconstitutional. Image by Getty Images

An organization representing ultra-Orthodox Jews is asking the highest court in the land to block New York Gov. Andrew Cuomo’s COVID-19 restrictions on worship — and to do it in time for Shabbat on Nov. 20.

Agudath Israel of America has been trying to overturn Cuomo’s rules in the courts for more than a month now. After striking out in emergency filings with the trial court and a federal appeals court, the next stop is the U.S. Supreme Court. The legal odds remain against them.

Yet there are two key factors at play here that may lift Agudath Israel’s case where others came up short: the governor’s own words explaining his goals and intentions, and the newest member of the high court.

Do the court’s other coronavirus rulings give us any clues about this one?

Before Justice Ruth Bader Ginsburg died in September, the court ruled in favor of states and their right to enforce crowd restrictions to prevent the spread of COVID-19. Now, with her replacement Amy Coney Barrett installed, that could change.

In the pandemic’s early months, the court supported state-level COVID-19 measures — even those alleged to have violated religious liberties, said Carolyn Shapiro, a law professor and Supreme Court scholar at Chicago-Kent College of Law.

Chief Justice John Roberts tends to be deferential when the states themselves want to take a certain action, she explained.

“For some justices, and in particular, I think, for the chief justice, federal intrusion onto state process, the thumb is on the scale on the side of the state,” she said.

For example, in May, the Supreme Court denied an injunction application similar to Agudath Israel’s brought by a California church. In that case, the church argued the state was restricting the free exercise of religion by limiting how many people could worship in one place.

Roberts didn’t buy it. He sided with the four liberal justices, citing the pandemic as an “extraordinary” health emergency and noting that California placed similar or more severe restrictions on comparable secular gatherings, such as lectures and concerts.

Secular activities like grocery shopping are different from worshipping in church, because people don’t congregate in the same way at a supermarket, he wrote.

At the time of the October rollout, the red zones centered on Orthodox communities that had the highest positivity rates. Those zones faced the strictest rules, with worship capped at 10 people.

As of Thursday night, cases in the New York City metro area dipped low enough that only yellow zones remain in effect — but orange and red may reappear if new hotspots emerge.

One big difference between the California case in May and New York’s now: a much more outspoken governor.

In a CNN interview in early October, Cuomo said “the cluster is a predominantly ultra-Orthodox cluster.” Comments like this are relevant because they played a role in another landmark case, Masterpiece Cakeshop. Agudath Israel cited that ruling from 2018, where seven justices sided with a Colorado bakery owner who refused to bake a same-sex wedding cake on religious grounds.

That ruling focused narrowly on how the Colorado government treated the religious bakery owner with hostility at public hearings, in violation of the First Amendment.

“[T]he Governor’s guilt-by-religious-association restrictions have made it impossible for [the synagogues] and their members to exercise their religious faith,” the court filing reads.

Amy Coney Barrett’s presence on the bench could also shift the goalposts in Agudath Israel’s favor.

Last month during her nomination proceedings, Agudath Israel endorsed Barrett’s appointment to the high court. Conservative groups believe she will be receptive to appeals to religious freedom.

In September, in her previous role on the Chicago-based 7th U.S. Circuit Court of Appeals, Barrett joined two other judges in a case that upheld religious exemptions to an executive order that limited gathering sizes. That decision stated that “Speech that accommodates religious exercise has a privileged position under the First Amendment.”

As a new conservative mind on the bench, cases may not be as reliant on winning favor with Roberts.

One of the other conservative justices, Samel Alito, left little question of his views during a speech last week to the Federalist Society. He slammed the high court’s 5-4 ruling in July that upheld Nevada’s shutdown orders, which set a hard 50-person cap on religious gatherings but set a 50% capacity for the state’s casinos.

“You will see the Free Exercise Clause of the First Amendment which protects religious liberty; you will not find a craps clause or a blackjack clause or a slot machine clause,” Alito told the conservative legal organization.

Will the court give its answer by sundown on Nov. 20?

It’s possible. The filing here is an “emergency application,” asking the justices to step in early and immediately stop enforcement of Cuomo’s while the sides litigate the case.

Emergency applications get sent to individual Supreme Court justices based on the state they come from. In the case of New York State, Agudath Israel’s filing went to Justice Stephen Breyer.

Breyer could grant or deny their request on his own. It’s not the most likely scenario, said Shapiro, who clerked for the justice earlier in her career, because the applicant can always ask for a do-over with a different justice if they’re turned down the first time. In divisive cases, the justices prefer to let the whole court weigh in, she said.

For the immediate relief Agudath Israel is looking for, they’ll need to show the justices how their legal rights are “indisputably clear” and how they’re likely to win the lawsuit.

They’ll also need to convince the high court that “irreparable harm” will result if the court doesn’t step in at this moment. Last month, a federal judge in Brooklyn didn’t see it that way, suggesting the synagogues could simply modify their practices to comply with the restrictions and avoid irreparable harm.

In its filing, Agudath Israel says Cuomo’s limits make it impossible to conduct Shabbat services for the hundreds of congregants at each shul between Friday at sundown and Saturday at sundown.

Other faith groups could simply drive outside of the restricted zones to find another place to worship, but Orthodox Jews don’t drive on Shabbat, they wrote.

Even if the court rules this week that Cuomo’s order should stand for now, that doesn’t necessarily spell doom for Agudath Israel’s case.

One notable example: In the 2014 ruling in Burwell v. Hobby Lobby Stores, the 5-4 majority held that for-profit companies can raise religious objections to be exempted from the Affordable Care Act’s contraception mandate.

While that case was being litigated in Oklahoma in 2012, Hobby Lobby asked the Supreme Court to temporarily block the federal contraception mandate as the case played out. Justice Sonia Sotomayor denied the request.

They lost that initial battle, but they won the war with the final ruling.