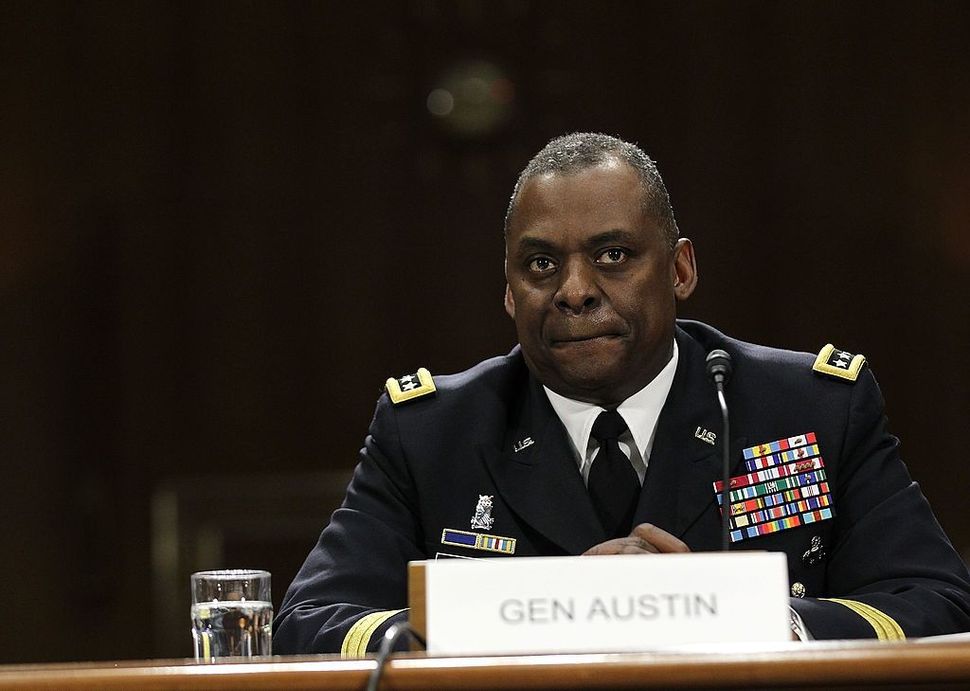 Retired Army General Lloyd Austin is expected to be nominated as defense secretary by President-elect Joe Biden, raising some concerns among Democrats over civilian control of the military. Image by Getty Images

President-elect Joe Biden’s nomination of Retired Gen. Lloyd Austin to be defense secretary is raising hackles among Democrats concerned that Austin would erode civilian control of the military.

Rep. Elissa Slotkin, a Michigan Democrat, praised Austin’s experience in a Tuesday statement, but said that the nomination of a retired general for the traditionally civilian role “feels off.”

“The job of secretary of defense is purpose-built to ensure civilian oversight of the military,” Slotkin wrote. “And after the last 4 years, civil-military relations at the Pentagon definitely need to be rebalanced.”

Austin retired from the military in 2016 after a career that spanned five decades and culminated in a role as a top commander overseeing American forces in Iraq.

If the Senate confirms his nomination, Austin will become the first Black defense secretary. News of his nomination comes after several prominent Black elected officials called on Biden to nominate more diverse candidates to his cabinet.

But many Democrats and political watchers are wary of nominating another general to head the Pentagon after four years in which they say President Donald Trump injected partisan politics into the Defense Department.

Former military personnel require a Congressional waiver to serve as defense secretary if they have not been retired for more than seven years. Congress granted a waiver in 2017 to Jim Mattis, Trump’s first pick for the job.

Austin’s corporate ties have also concerned some progressives. After leaving the Army, Austin joined the board of Raytheon Technologies, a major defense contractor, and also served on the board of steel producer Nucor and health care company Tenet. Critics worry especially about Austin’s connection to Raytheon, which does significant business with the Pentagon and regularly lobbies Congress.

Slotkin’s office did not respond to a request for comment about whether she would vote in favor of a waiver for Austin. In her statement, Slotkin said she needed more information about Austin’s selection from the Biden transition team.

Slotkin, who is Jewish, is a former intelligence analyst who served in the Defense Department during the Obama administration.

Biden explained his selection of Austin in an op-ed for The Atlantic, praising Austin’s military leadership during the Obama administration but failing to directly address concerns over his recent retirement from the military.

“Lloyd Austin retired from military service more than four years ago,” Biden wrote. “The law states that an officer must have left the service at least seven years before becoming secretary of defense. But I hope that Congress will grant a waiver to Secretary-designate Austin, just as Congress did for Secretary Jim Mattis. Given the immense and urgent threats and challenges our nation faces, he should be confirmed swiftly.”

Civilian control of the military, by which top generals are required to answer to civilian political leaders, is typical in liberal democracies.

“Throughout modern history, Jews have fared better in liberal and democratic regimes than illiberal ones, mainly because the former are more tolerant of diversity and intolerant of group hatreds such as antisemitism,” Derek Penslar, a professor of Jewish history at Harvard, said in an email. “Liberal and democratic regimes tend also to feature civilian control over the military.”

But Penslar, author of “Jews and the Military: A History,” said there was not a direct connection between civilian control over the military and Jewish safety.

Jews have had a complex relationship with military leadership throughout history. In late 19th-century Austria-Hungary and Germany, for example, the army was frequently called in to respond to antisemitic riots — although more often to restore order than to protect Jews, Penslar said.

And the lines between military and civilian leadership are much muddier in Israel. While the Israel Defense Forces are technically subordinate to the government, military personnel only have to wait one year after formally leaving the armed forces before becoming defense minister, and many former generals have gone on to serve in government, including Ariel Sharon, Ehud Barak and current leader of the Blue and White political alliance Benny Gantz.