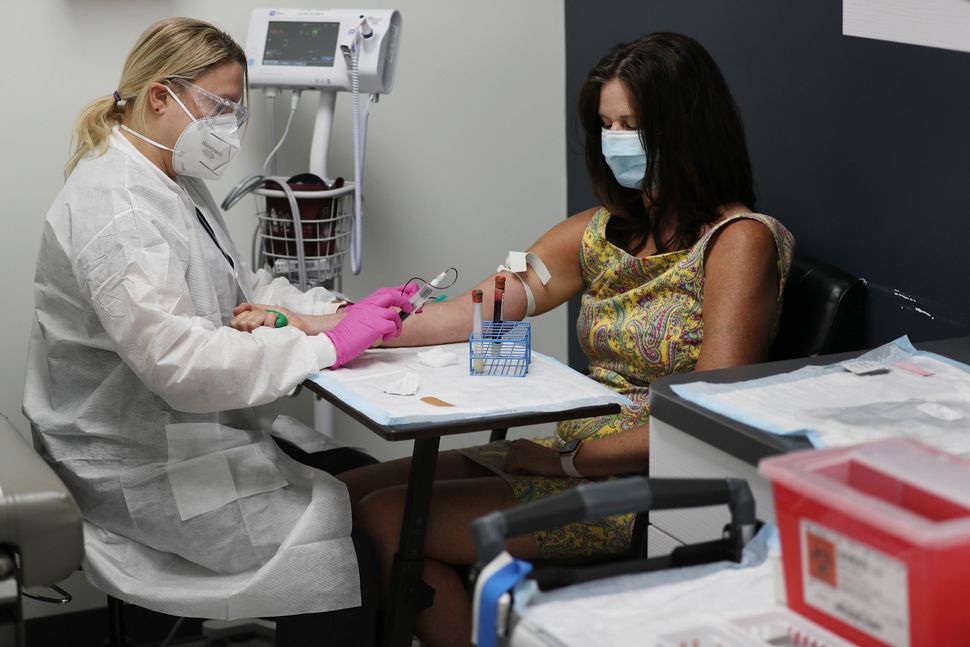 Leyda Valentine, an assistant coordinator, takes blood from Lisa Taylor as she participates in a COVID-19 vaccination study at Research Centers of America on August 07, 2020 in Hollywood, Florida. Image by Getty Images

The TikTok video of Rabbi Shmuel Herzfeld receiving a shot of the Moderna COVID-19 vaccine isn’t racking up Cardi B numbers, but it has reached an impressive 400,000 views.

“I saw an advertisement that they were looking for people for their clinical trial,” Rabbi Herzfeld, 46, said. “I am not a doctor or a nurse, but I wanted to see what I could do to make a difference. So I volunteered”

Herzfeld, spiritual leader of Ohev Sholom in Washington, D.C., also posted videos and images of his vaccinations across social media, just in case anyone missed the point — get vaccinated.

Herzfeld is far from the only rabbinical voice on behalf of vaccination. Rabbis across all denominations, and around the world, have thrown their authority behind the new vaccines.

Herzfeld’s wife Rhanni, a neurologist, is also participating in the clinical trial and received her shot a few days later.

“Everybody has a responsibility to get vaccinated, and those who don’t should not be allowed to come into synagogues and day schools and participate in other religious programs,” the rabbi said. “If people are not taking it seriously, it is not just their life they are affecting but others.”

But many Americans are not following Herzfeld’s lead. A survey by the Kaiser Family Foundation found that more than a quarter of Americans said they would probably not or definitely would not get vaccinated, with 59% of the 1,676 adults interviewed between Nov. 30 and Dec. 8 saying they feared side effects. And 59% said they were concerned about the safety and efficacy of the vaccines, while slightly more than half said they believed politics played a role in the development of the Moderna vaccine and another developed by Pfizer. The latter vaccine received FDA approval last week and is being used now to vaccinate frontline health care workers.

Rabbi Herzfeld said many of the responses to his TikTok video made him well aware that there are people who refuse to take the vaccine.

“I’ll pass,” wrote one viewer. Another wrote, “Thanks for taking a vaccine with less than a year of studies.” And a third said simply, “I don’t trust this.”

That skepticism is why public health experts say it’s important for faith leaders to speak up. Elaine Howard Ecklund, of Rice University’s Religion and Public Life Program, told Religion News Service that faith leaders can be a bridge between science and believers who may remain skeptical.

Three of the most senior rabbis in the ultra-Orthodox world, Chaim Kanievsky, Gershon Edelstein and Shalom Cohen, recommended this week that “anyone who has the option of getting the vaccine should get it.” They said it has been proved safe and was developed using accepted scientific methods.

The three had consulted with Rabbi Elimelech Firer, chairman of a medical support organization, and their opinion has been published in major ultra-Orthodox newspapers.

In Israel, senior rabbis there issued a decree urging ultra-Orthodox Jews to get vaccinated, saying that “according to all acceptable medical parameters, it has been proved that the vaccines are safe.”

These comments are particularly important in ultra-Orthodox communities because the views of rabbinical leaders govern public attitudes.

Rabbi Jonah Dov Pesner, director of the Religious Action Center of Reform Judaism, issued a statement on Dec. 16 on behalf of all the arms of the Reform movement calling for the COVID-19 vaccines to be widely used and “equitably distributed.”

“Systemic racism in our health care system and disparities in access to care have caused marginalized communities to suffer most during the pandemic,” he said. “We call on our leaders to develop a comprehensive plan that protects the most vulnerable people and communities who are most susceptible to our current health and economic crisis.”

The Conservative movement is planning to issue its own rabbinical opinion on vaccinations. Rabbi Jacob Blumenthal, chief executive officer of both the movement’s Rabbinical Assembly and its United Synagogue for Conservative Judaism, said the Committee on Jewish Law and Standards is now studying the issue. The committee is the movement’s central authority on halacha or Jewish law and tradition.

He said the committee is now studying the opinion written in Israel by Rabbi David Golinkin, who said it is “a halachic obligation” for Jews to vaccinate themselves and their children unless their doctors determine it is medically inadvisable.

He added that it’s halachically permissible for a school, synagogue or the State of Israel to prevent an unvaccinated person from entering.

Similar guidance has been issued also by the Orthodox Union and Rabbinical Council of America.“The Torah obligation to preserve our lives and the lives of others requires us to vaccinate for COVID-19 as soon as a vaccine becomes available,” they wrote.

Rabbi Adir Posy, director of the OU’s Department of Community and Synagogue Services, which works with 800 congregations, said that Orthodox rabbis are “echoing those sentiments.”

Posy, assistant rabbi at Beth Jacob Synagogue in Los Angeles, said his synagogue issued a similar statement and then distributed the national statement “because we firmly believe in the importance of making sure that people take the vaccine. We highlight the Jewish value of doing whatever we can to protect human life.”

Rabbi Julie Schonfeld, former head of the Rabbinical Assembly, said she would like to see synagogues assist members get vaccinated. She said they could arrange to have babysitters in the synagogue to care for small children while their parents get the vaccine. And synagogues working with health care professionals could also hire home health aides to relieve aides who are caring for homebound elderly while they go to get their vaccine.

With the expected FDA approval of the Moderna vaccine this week, Rabbi Herzfeld said it’s not just time to get vaccinated, it’s a time to give thanks.

Congregations should offer “communal blessings this Shabbat recognizing the miracle we have with these vaccines.”

Meanwhile, he will continue to speak about the vaccines from the pulpit.

“My faith commands me to take the vaccine and evangelize about it,” he said. “This is the most important sermon of my life – getting vaccinated.”