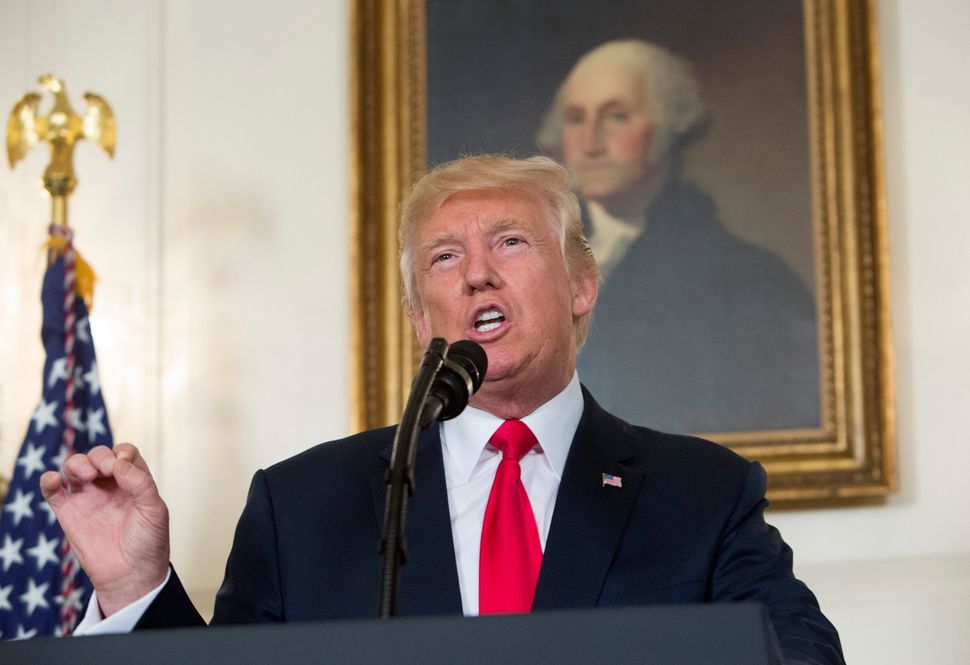 U.S. President Donald Trump makes a statement on the violence this past weekend in Charlottesville, Virginia at the White House on August 14, 2017 in Washington, DC. Heather Heyer, 32, was killed in Charlottesville when a car allegedly driven by James Alex Fields Jr. barreled into a crowd of counter-protesters following violence at the ‘Unite the Right’ rally. Photo by Chris Kleponis-Pool/Getty Images

Former President Donald Trump has left the White House, but a sticky legacy of emboldening white nationalists and antisemites could follow him during his civilian life.

From the man who once described himself as the “least antisemitic person that you’ve ever seen,” below are some of the Trump administration’s antisemitic greatest hits.

Only seven days after Trump took office, his administration failed to mention Jews or antisemitism in its statement in remembrance of the Holocaust.

“Victims, survivors and heroes” were all mentioned, but Jewish groups took issue with the glaring omission of the antisemitism that drove the Holocaust, and it was a significant break with precedent.

Jonathan Greenblatt of the Anti-Defamation League called it “puzzling and troubling.” Steven Goldstein of the Anne Frank Center for Mutual Respect accused the administration of using a “vague phrase” to refer to victims.

”Very fine people on both sides”

Who could forget the moment that Joe Biden says prompted him to run for president in the first place?

While the country reeled from the sight of neo-Nazis holding torches and chanting “Jews will not replace us” at a 2017 rally in Charlottesville, Trump took the opportunity to weaken any previous condemnation of the white nationalists who attacked counter-protesters by saying “You also had people that were very fine people, on both sides” and that “There’s blame on both sides.”

During a May 2020 tour of a Ford Motor Co. plant in Michigan, the former president noted the “good bloodlines if you believe in that stuff” of the company’s founder, Henry Ford, an antisemite who was a major proponent of eugenics.

That the president used the term “bloodlines” suggested an antisemitic and racist dog whistle for those who agreed with Ford’s unsubstantiated belief system — that genes themselves rendered Jews, people with disabilities and other marginalized groups inferior and thus worthy of sterilization or murder.

”Stand back and stand by”

Instead, the president told the Proud Boys, a “western chauvinist” organization with ties to antisemites to “stand back and stand by.”

Proud Boys rejoiced on the instant-messaging app Telegram and took the president’s remarks as a call to prepare for violence. At the Capitol insurrection earlier this month, the Proud Boys were in attendance.

“Are you willing tonight to condemn white supremacists?”

Trump: “What do you want to call them?”

Former President Donald Trump said in August of 2019 that Jews who vote for Democrats show “either a total lack of knowledge or great disloyalty,” and later said that those same Jewish Democrats “are being very disloyal to Jewish people and very disloyal to Israel.”

The concept that Jews are disloyal, untrustworthy or are insufficiently dependable because of their religion is an age-old antisemitic trope.

The then-president’s words wink at white supremacist claims that Jews are loyal to Israel over the United States or loyal only to other Jews.

Former White House Press Secretary Sean Spicer could not stop digging a hole for himself in 2017 after he compared Syrian President Bashar al-Assad to Adolf Hitler and said Hitler did not use chemical weapons.

Spicer was trying to justify a missile strike on Syria for the country’s use of sarin gas.

“You had someone as despicable as Hitler who didn’t even sink to using chemical weapons,” Spicer said, apparently unaware of the gas chambers used at concentration camps.

When asked to clarify, Spicer got out the shovel again.

“He was not using the gas on his own people the same way that Assad is doing,” Spicer said, later mentioning that victims were brought into “the Holocaust centers.”

TruNews, a far-right Christian media site whose founder, Rick Wiles, described Trump’s first impeachment as a “Jew Coup” planned by a “Jewish cabal” received press credentials from the White House to cover the then-president’s trip to the World Economic Forum in Davos, Switzerland in early 2020.

The move earned formal condemnation from two members of Congress.

Cohn is a “globalist”

When the National Economic Council director Gary Cohn, who is Jewish, resigned in 2018, Trump said he “may be a globalist” or “is seriously a globalist.”

The word “globalist” is a dog whistle for antisemites who see Jews as part of a conspiracy for global control and manipulation.

Star of David and a pile of cash 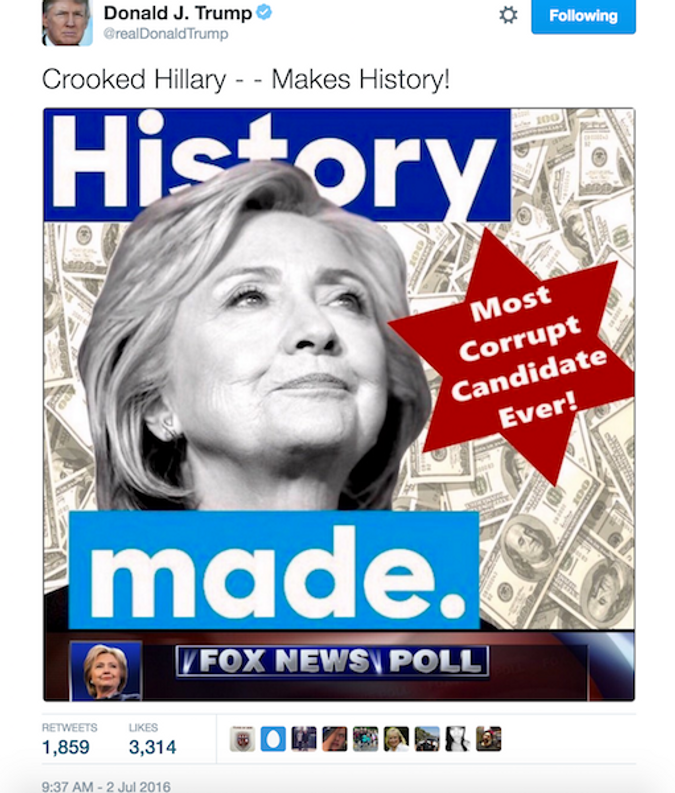 A Trump tweet from July of 2016 showed candidate Hillary Clinton superimposed over a pile of money next to a six-pointed star that said, “Most Corrupt Candidate Ever.”

The image was originally posted on 8chan, a social media platform popular with far-right and neo-Nazi users.

Trump eventually deleted the tweet and posted a nearly identical one — only this time, the star was changed to a circle.

It was one of multiple tweets during the campaign with antisemitic undertones, including a retweet of an account that claimed to be located in “Jewmerica.”

While it technically occurred before Trump took office, the tweet belongs among these banner antisemitic moments.

Jews are “not gonna vote for the wealth tax”

During an Israeli American Council campaign event in December of 2019, Trump fell back on old antisemitic tropes about Jews (the majority of the audience) and money.

“A lot of you are in the real estate business, because I know you very well. You’re brutal killers, not nice people at all,” he said. “You’re not gonna vote for the wealth tax. Yeah, let’s take 100% of your wealth away!”

Jewish organizations like the American Jewish Committee and the Jewish Democratic Council condemned those remarks.