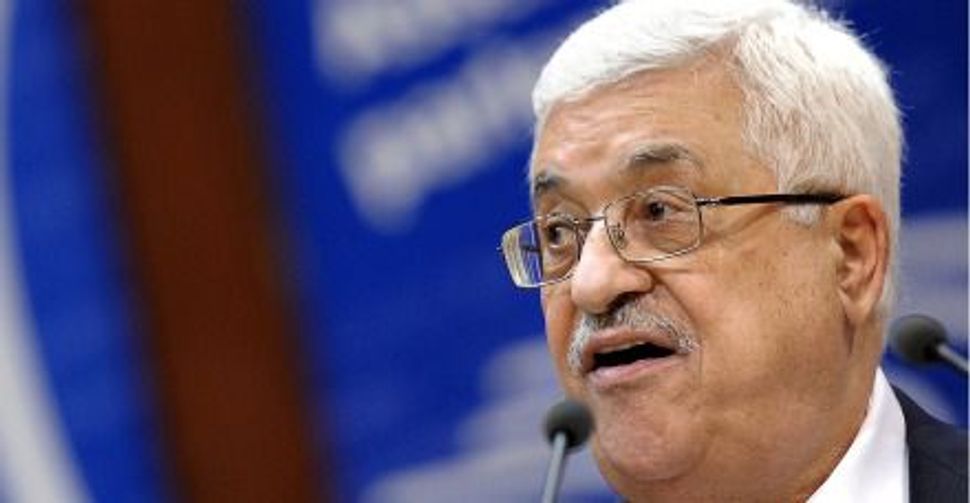 (JTA) — Palestinian Authority President Mahmoud Abbas said he was ready to “remove obstacles” to renewing U.S.-Israel ties, apparently signaling a willingness to stop the payments to the families of Palestinians who have killed Israelis that have proven to be a stumbling block.

Speaking Sunday to J Street’s annual conference, Abbas also urged the participants of the liberal Middle East policy group’s forum to lobby Congress “to repeal all laws that block the road toward enhancing Palestinian-U.S. relations.” The current law designates the Palestine Liberation Organization as a terrorist group and bans direct aid to the Palestinians as long as payments are made to the families of Palestinians jailed in Israel for any terrorism-related offense.

“On our part, we will remove all obstacles to achieve this goal,” Abbas said. “The continuity of these laws is frustrating and unconstructive.”

Abbas did not outline which “obstacles” he planned to remove, but his pledge, however vague, was a sign of Palestinian eagerness to reengage with the United States after years of virtually no relations under former President Donald Trump. Trump mostly ceased ties with and assistance to the Palestinians, in part because of the payments, but also because the Palestinians rejected his peace proposal, which recognized Jerusalem as Israel’s capital and allowed Israel to eventually annex parts of the West Bank.

“I think the principle that the Palestinian Authority understands is that even many of those who have goodwill towards the cause of the Palestinian people are deeply disturbed by the shape of the current program and we’d like to see a reform,” Ben-Ami said.

The Palestinians have long argued that Israel’s terrorism laws are too broad and are applied promiscuously. But they have privately acknowledged that payments to those who have killed civilians — as opposed to those convicted of lesser crimes, including membership in banned organizations — complicate their case.

President Joe Biden campaigned on restoring assistance and reopening diplomatic ties with the Palestinians. He has already restored nearly $300 million in aid through the U.N. relief agency UNRWA and other platforms.

In asking J Street to seek the rollback of U.S. laws, Abbas named the 1987 law designating the PLO, an adjunct of the Palestinian Authority, as a terrorist group. The law has complicated U.S.-Palestinian relations for years — setting up a Palestinian diplomatic mission in Washington, D.C., for example, required a special waiver. Abbas suggested that the basis for the law was moot, noting that the PLO had recognized Israel and entered into agreements with it.

The J Street conference, held virtually this year, was a celebration of the group’s renewed influence now that Democrats hold the White House and lead both chambers of Congress. There were greetings from an array of Democrats, including moderates like Reps. Elissa Slotkin of Michigan and Abigail Spanberger of Virginia, and party leaders Rep. Nancy Pelosi and Sen. Chuck Schumer. Linda Thomas-Greenfield, the American ambassador to the United Nations, spoke Monday evening.

J Street, once an organization that sought bipartisan reach and managed to attract a handful of Republicans to its conferences, now makes no pretense of being anything other than in the Democratic camp. Speaker after speaker at the conference extolled the ouster of Trump and Democratic wins in Congress. The Jewish Democratic Council of America, a partisan group, hosted a session on political strategy.

The conference theme was an exploration of a Palestinian-Israeli confederation as a means of preserving the two-state solution. Also on the agenda was advocacy for restrictions on how Israel spends U.S. assistance. Last week, J Street endorsed a bill that would ban Israel from using U.S. funds on jailing Palestinian minors, destroying Palestinian buildings and annexing Palestinian land. For a group that calls itself pro-Israel, that was a notable break from the pro-Israel orthodoxy that American financial assistance to Israel is sacrosanct.

Sen. Elizabeth Warren, D-Mass., who spoke Monday afternoon, said “it would be irresponsible not to consider all of the tools we have at our disposal” to influence Israel, including military assistance. Sen. Bernie Sanders of Vermont, who spoke that night, delivered a similar message. During their unsuccessful presidential bids last year, both Sanders and Warren said aid to Israel should no longer be untouchable.

Unusually, Warren also weighed in on coalition negotiations in Israel, advising parties not to endorse Netanyahu for another term. Warren likened the situation facing the party leaders to Americans who in November united to remove Trump from office. Israel’s elected leaders should do the same, she said, and give the Israeli people a new prime minister.

“Will they continue to fight among themselves and, in the process, prop up a corrupt leader who puts his own interests ahead of those of his country?” she said, referring to Netanyahu’s current trial on corruption charges. “Or will they join together to begin the difficult task of rooting out corruption and reinstating the rule of law?”