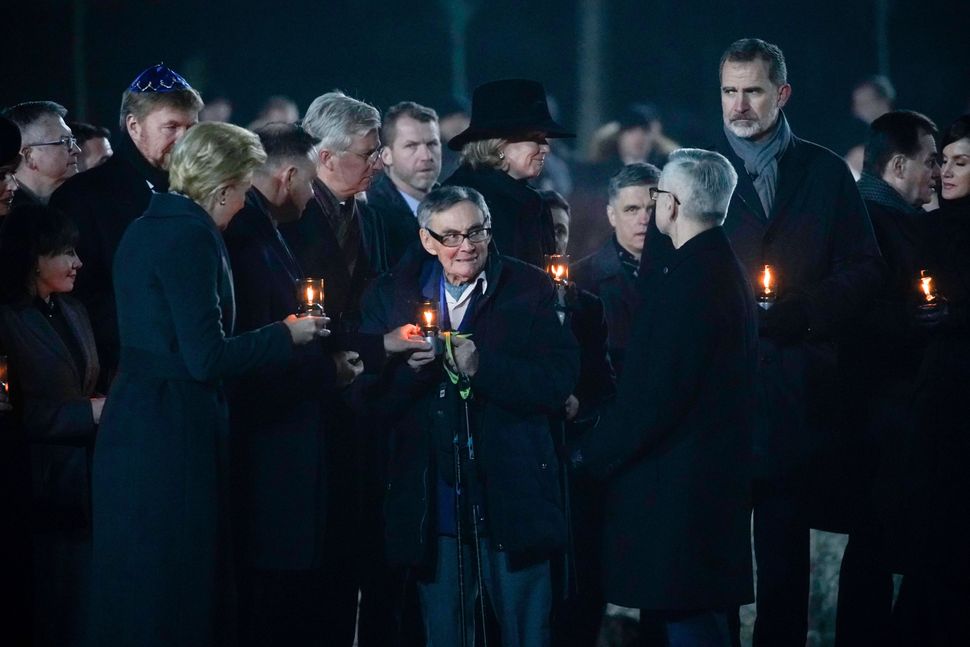 A delegation of heads of state led Marian Turski (C) and King Felipe VI of Spain (R) attend a candle lighting ceremony at the former German Nazi death camp Auschwitz-Birkenau during events to commemorate the 75th anniversary of the camp’s liberation in January 2020. Image by WOJTEK RADWANSKI/AFP via Getty Images

The first Holocaust Survivor Day will be celebrated on Thursday to honor the world’s remaining 350,000 Holocaust survivors.

Though there are three separate days each year to remember those who perished in the Holocaust, there had been none set aside for an annual recognition of survivors. Spearheaded by a group of Jewish community leaders and historians, Holocaust Survivor Day will be marked across continents with a free, virtual conference that will explore the origins of the day and the legacy of survivors.

As Michael Berenbaum, director of the Sigi Ziering Institute and former director of the U.S. Holocaust Memorial Museum in Washington, D.C. said this spring as efforts to create the day gained momentum, “Survivors deserve a day of their own for what has been their tremendous achievement … They have become the moral conscience of their community in many parts of the world and made sure the Holocaust is remembered for the betterment of humanity.”

Many synagogues around the world will be observing this coming Shabbat as “Survivors Shabbat” and Jewish community centers are organizing other celebrations.

The conference, which begins at noon Eastern time on June 24, will feature several panels, and will pay particular attention to the 100,000 Holocaust survivors who live in poverty.

Colette Avital, chairperson of the Center of the Organizations of Holocaust Survivors in Israel, which is home to 200,000 survivors, will join Jonathan Ornstein, founder of Holocaust Survivor Day and founding executive director of the JCC Krakow, and others for the opening session, on survivors’ impact within and without the Jewish world.

Holocaust survivors themselves are featured on the 1 p.m. panel, which will be moderated by Berenbaum. He will be joined by three survivors, including Marian Turski, 94, who has been described as the “moral conscience of the Polish Jewish community.” Holocaust Survivors Day honors his birthday — June 26. But because it falls on Shabbat this year, the observance was set for Thursday.

A “Second Generation Panel” featuring four children of Holocaust survivors will also be held at 1 p.m. They will discuss the stories and lessons learned from their parents and what a day honoring survivors means to them. A concurrent “Third Generation Panel” will ask four grandchildren of Holocaust survivors to reflect on the time they spent have with their grandparents and how those experiences can be shared with younger generations.

Communities have also organized their own programs to mark Holocaust Survivor Day.

Among them is a celebration at 2 p.m. Wednesday at the Mid-Island Y JCC in Plainview, Long Island with 47 survivors from the area. Organizers describe the day as one of joy to “celebrate the lives survivors built in response to the Holocaust.” They will be honored as “our treasure and our light” which must be “shined into every dark corner of the world.” All other survivors, and their children and grandchildren, are also invited. Reservations are required by calling 516-822-3535 ext. 301 or emailing.

And on Sunday at 1:30 p.m., the UJA-Federation of New York will join with the Metropolitan Council on Jewish Poverty for a volunteer project packing groceries that will serve 2,000 homebound Holocaust survivors and 1,300 homebound seniors living in low-income housing. Of the 36,000 Holocaust survivors living in the New York area, UJA-Federation reports that nearly 40 percent are impoverished. For more information and to sign up, contact Alex Strashun by June 24.

Some communities will say a Holocaust Survivor Prayer written for the occasion by Rabbi Avi Baumol, who is now serving the Jewish community of Krakow:

“May God who blessed our ancestors, Abraham, Isaac and Jacob, Sarah, Rebecca, Rachel, Leah, bless and protect, guide and continue to inspire the holy souls who survived the Holocaust (in particular, insert name of survivor______ben/bat________).

They, who have lived through the greatest darkness yet succeeded in rebuilding their lives and restoring light to the world — please bestow upon them your own hallowed light, envelop them in your lovingkindness, and grant them continued long and meaningful life.

O God, please give us the strength and means to support our survivors; allow us to hear their message of resilience and hope; they, our greatest heroes, our lodestar, our vision of holiness. May we be imbued with their spirit, carry on their life-force, and teach their lessons of love and courage to the next generations.”

Note: The author’s wife, Meryl Ain, is on the international advisory committee for Holocaust Survivor Day.