‘They need a miracle’— aid pours in for Jewish victims of Surfside, Florida building collapse 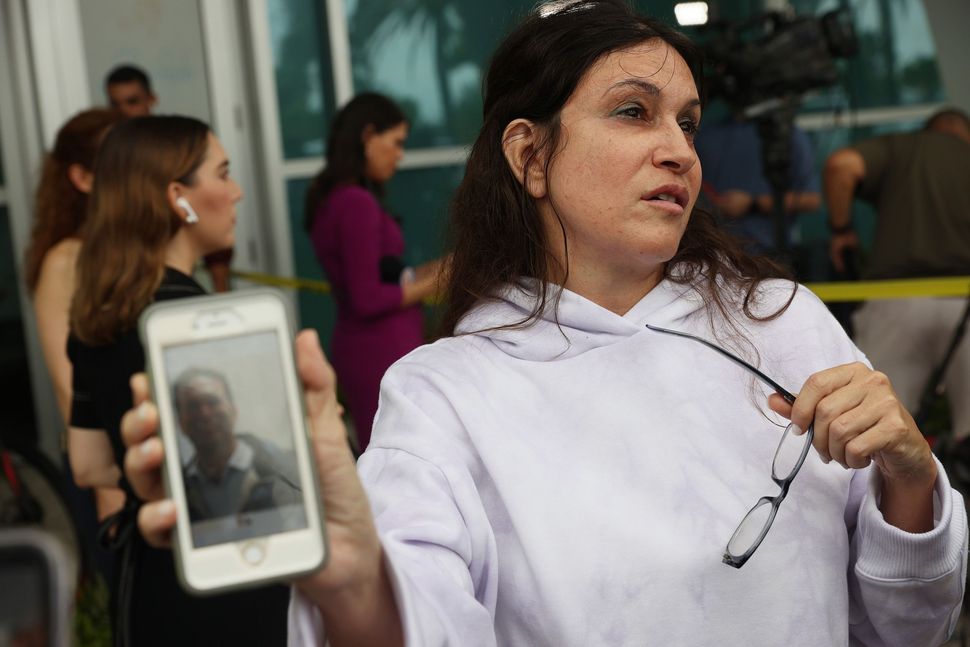 Soriya Cohen shows a picture of her husband, Brad Cohen, who was missing after the collapse of the 12-story condo tower in Surfside, Florida. By Joe Raedle/Getty

Jewish organizations are urging people around the world to pray for all the victims of the catastrophic residential tower collapse near Miami, including some 20 Jewish people estimated to be among the 99 missing in the tragedy.

A section of a 12-story condominium tower in Surfside, Fla., collapsed late Wednesday night, flattening more than 50 apartments in a matter of seconds and sending authorities into a desperate search for survivors in the wreckage that continued late Thursday evening.

As of 5 p.m. on Thursday, 102 people had been accounted for. One was declared dead.

Located just north of Miami Beach, Surfside is home to a large and thriving Jewish population, among them many Orthodox. The Shul of Bal Harbour, a Chabad-Lubavitch synagogue located less than a mile from the building, has four separate daily minyans and welcomes 500 to 1,000 people on a typical Shabbat, according to Rabbi Sholom Lipskar, its founder and head rabbi.

Lipskar estimated that a quarter of the residents of the building, the south building of Champlain Towers, were Jewish.

“They need a miracle here,” he said Thursday evening.

Chabad of South Broward, an area synagogue, told the Sun-Sentinel 34 of the 99 missing were Jewish.

Kol HaOlam, a Jewish news provider, listed in a tweet early Thursday morning the Hebrew names of 20 people it described as missing in the collapse.

To Lipskar’s knowledge, only one person, a relatively new member of the congregation, had been saved from the wreckage. No other survivors had been found.

Lipskar said he had been to the building several times for life cycle events — from circumcisions to bereavement, as well as to lead Torah study. While in recent years several families have moved closer to the shul, Lipskar said, he knew many of the people affected.

“We’re in a twilight zone presently because they’re still in a search and rescue modality,” he said. “Our hopes are dim. Nonetheless we have hope.” 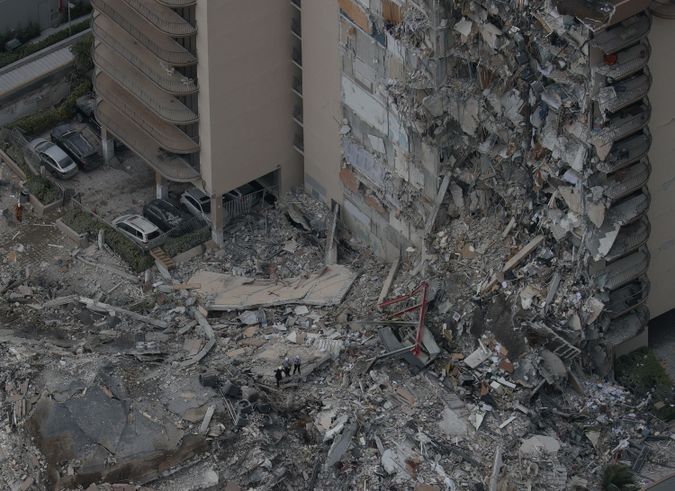 Lipskar said that the Jewish communal emergency response group Hatzalah of Miami-Dade dispatched hundreds of volunteers to the scene.

He said one family in his congregation had felt the building trembling moments before it collapsed, and escaped the crumbling section on a narrow ledge.

The South Florida community was rallying to support the victims in spite of a downpour that lasted much of Thursday.

The Greater Miami Jewish Federation had set up an emergency assistance fund.

“We join with the entire community to mourn the loss of life and pray for a full recovery of those injured, even as we hold out hope for the fate of those who remain missing,” the Federation said in a statement.

A separate donation page set up by Lipskar’s congregation had already raised $227,000 as of Thursday evening. 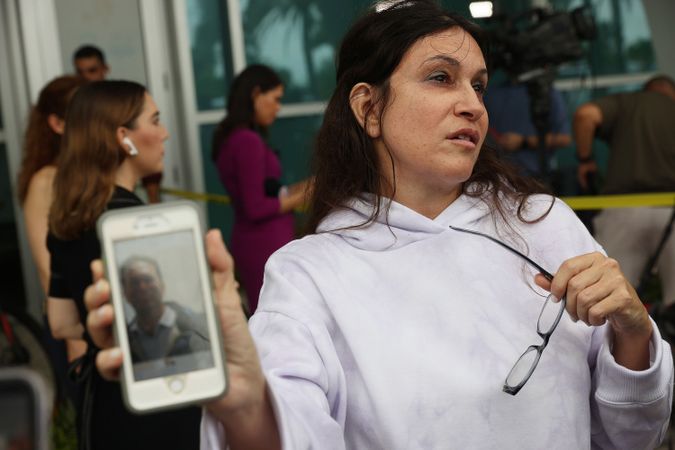 Soriya Cohen shows a picture of her husband, Brad Cohen, who was missing after the collapse of the 12-story condo tower in Surfside, Florida. By Joe Raedle/Getty

Both The Shul of Bal Harbour and Young Israel of Bal Harbour put out requests for emergency kit items, and Lipskar said by Thursday afternoon his synagogue’s social hall was filled “wall-to-wall” with donations ranging from clothing and food to phone chargers and automatic ovens.

Meanwhile, one of the largest Jewish communities in the country — which only grew during the COVID-19 pandemic as New Yorkers fled to warmer climates — struggled to reckon with the scale and shock of the catastrophe.

Longtime Surfside resident Oliver Sanchez, who lives a few blocks from Champlain Towers, headed over to the disaster on his bike early this morning. A member of the Surfside planning and zoning board, Sanchez had gotten several notifications overnight. He described an eerie scene of shocked onlookers, a phalanx of media cameras, silent except for the wail of sirens.

“I saw half the building was gone,” said Sanchez, who frequently goes to the beach nearby. “It’s total devastation. You know people live there. We know the building… There’s this ominous, somber thing happening, a weird quietness. People on the beach they’re walking around in shock. The implications are bouncing around in your head. There’s bodies in that pile. It’s shocking.”

The building is less than four miles east of where Rabbi Eli Rosenfeld, director of Chabad of Eastern Shores, lives and works. He has been to it many times, and knows people who live there.

He compared the tragedy to that on Mt. Meron on Lag B’Omer, and is in touch with friends who have been at the site and are trying to help.

“I’ve met a few people today and every single one of them knows directly or indirectly someone who lives there,” he said.

‘They need a miracle’— aid pours in for Jewish victims of Surfside, Florida building collapse