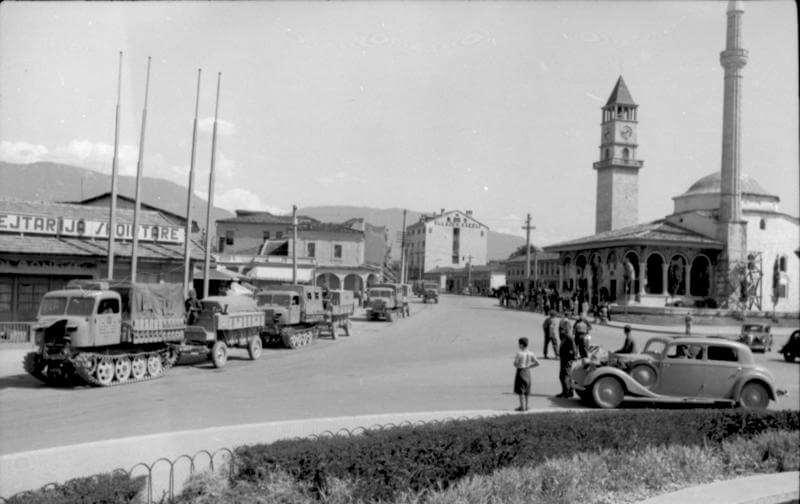 There are hundreds of statues and monuments in the United States and around the world to people who abetted or took part in the murder of Jews and other minorities during the Holocaust. As part of an ongoing investigation, the Forward has, for the first time, documented them in this collection of articles. For an initial guide to each country’s memorials click here. For a 2022 update to the investigation, click here. This page was added during the April 2022 project update.

Tirana and Elbasan — Albania’s capital has a street honoring Rexhep Mitrovica (1888–1967), above left, who became prime minister in the Nazi puppet government Germany established in Albania in 1943. (Above right, German forces occupying Tirana after seizing Albania from Italy, September 1943).

The question of Mitrovica’s culpability in the Holocaust is complicated, because his government controlled two territories: Albania proper as well as Kosovo, a region just north of Albania proper that was annexed to Albania in 1941. Jews in Kosovo and Jews in Albania proper had very different fates.

In 1944, Germany greenlit the creation of an Albanian unit in the Waffen-SS, the military wing of the Nazi Party. The new unit, the 23rd Waffen Mountain Division of the SS “Skanderbeg” (1st Albanian), was designed to operate in Kosovo. Mitrovica’s government helped establish and recruit volunteers for the division.

Shortly after its creation, SS Skanderbeg rounded up and deported at least 281 Kosovo Jews, many of whom were murdered in the Bergen-Belsen concentration camp. Additionally, Balli Kombëtar, the nationalist movement Mitrovica and others in his government belonged to, provided other military aid to the Third Reich.

The fate of Jews in Albania proper, however, was miraculously different. Albania proper was the only European nation which ended WWII with more Jews resident than when the war began. There are numerous eyewitness accounts of Albanian families and communities sheltering Jews; this was partly influenced by the society’s besa honor code, which demands the protection of strangers and asylum seekers. Denmark’s story of saving its Jews is well known; Albania’s is more obscure, but no less righteous.

At least one Jewish survivor stated the Mitrovica government refused to hand over lists of Jews in Albania proper to the Nazis. The fact Albania’s Jews survived stands in sharp contrast to regions such as Lithuania and Ukraine, where ultranationalist collaborators massacred Jews on their own initiative, often before German forces even arrived.

The relative lack of research of the Holocaust in Albania makes this nuanced and complicated period even more obscure. What is certain is that Mitrovica and his government were responsible for the creation of SS Skanderbeg, which participated in the Holocaust. The government also did resist, to some degree, Nazi demands to turn over lists of Jews in Albania proper.

Tirana also has streets dedicated to Sokrat Dodbiba (1899–1956), Mitrovica’s minister of finance (Dodbiba has an additional street in Elbasan) and Mehdi Frashëri (1872–1963), member of the High Regency Council.

Tirana and Kavajë — Tirana has a street dedicated to Mid’hat Frashëri (1880–1949), above left, “the father of Albanian nationalism,” who co-founded Balli Kombëtar in 1942. The organization provided military assistance to the Third Reich. Frashëri was an ideologue, helping shape Balli Kombëtar’s philosophy of “Albania for Albanians.” Another street is also dedicated to him in Kavajë. Above right, Balli Kombëtar forces in Prizren, 1944.

See the Kosovo and North Macedonia sections for more honors to Albanian collaborators.