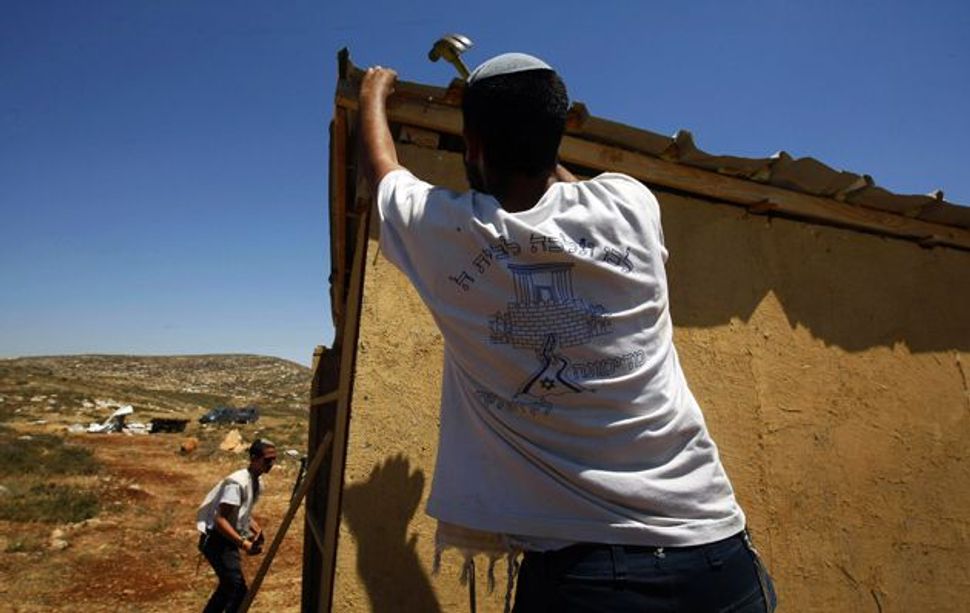 Nahalat Yosef Rises Again: Jewish settlers rebuild a house in the West Bank outpost of Nahalat Yosef on June 1, after it was destroyed by Israeli security forces. Image by Getty Images

The show goes on. As I write, a radio newscaster is repeating an item about the evacuation of an illegal settlement outpost in the West Bank: At Nahalat Yosef, near Nablus, the army demolished two makeshift mobile homes and removed a third, thereby erasing the outpost. Settler leaders promised to rebuild it. Judging from past experience, the promise will be kept.

The show started after Benjamin Netanyahu’s visit to Washington. Police razed several shacks comprising Maoz Esther, northeast of Ramallah. It was a grand demonstration that Netanyahu was acting against the 100-plus illegal outposts — small settlements established since the mid-1990s without government approval but with well-documented help from government agencies. Settlement activists immediately began rebuilding Maoz Esther. Like Nahalat Yosef and several other outposts removed with fanfare in recent days, Maoz Esther is among the least substantial of the outposts. Larger outposts haven’t been touched.

The outpost campaign is pure theater. The intended audience is Barack Obama, Hillary Clinton and George Mitchell. President Obama has made it utterly clear that he expects Netanyahu to fulfill Israel’s obligations under the 2003 road map for peace and the 2001 Mitchell Report: Remove outposts, stop all construction in other settlements. Netanyahu would like to convince Obama that he’s making a good-faith effort to evacuate the outposts and that the president should therefore let him continue building new homes in other settlements. This kind of con might work on a legacy student with a C average named George. To Netanyahu’s dismay, Barack Obama isn’t George.

Let’s be clear: Obama is asking Netanyahu to do the right thing for Israel’s future. The aim of settlement is to entangle Israel in the West Bank. The argument against permanent Israeli rule of that territory was laid out by the most clear-sighted of Israeli officials by the summer of 1967, and has remained true ever since: Ruling the West Bank without granting the Palestinians citizenship is the antithesis of democracy. Keeping the West Bank and giving them citizenship means making Israel into a binational state. Every new home in Tekoa or Ariel makes withdrawal more difficult. By insisting on a settlement freeze, Obama is acting like a guy standing in the door of his apartment, telling his drunken roommate that he really, really shouldn’t drive. That is, he’s a good friend getting a response that alternates between belligerence and pleading.

Why won’t Netanyahu agree to a freeze? First, because he is an unreconstructed ideologue of the right. He regards the West Bank as Israel’s patrimony, and has never recognized that denying political rights to the Palestinian population undermines Israeli democracy. His proposals for the future are the discredited colonial ideas of the past: Palestinians will concede dreams of independence in return for marginal economic progress.

Besides that, settlers and their supporters fill key roles in government bureaucracies that deal with settlement. Ministries continue to plan and subsidize settlement. The Civil Administration in the West Bank ignores violations of planning law. To stop settlement activity means overcoming this bureaucratic momentum. Yitzhak Rabin did that when he imposed a freeze on settlement in parts of the West Bank. So far, Netanyahu hasn’t shown he has Rabin’s commanding presence.

Acceding to Obama would also provoke rebellion among Netanyahu’s right-wing coalition partners, and invite confrontation with the settlers themselves. This week, radical settler activists renewed their “price tag” strategy: In response to removal of outposts, they blocked a road in the Nablus area, threw stones at Palestinian cars and clashed with soldiers. The idea is to show the government that the price of restricting settlement is setting the West Bank aflame. Never mind the consequences for the army, Israel or the settlers themselves. Netanyahu hoped that removing minor outposts would be a price tag of a different sort — the small cost of assuaging Washington while continuing to build settlements.

Fortunately, Obama is standing firm. Netanyahu, after all, has other options. Ideological rigidity is a choice, not a law of nature. The prime minister could reexamine the real costs of the settlement enterprise to Israel’s democracy, its international standing and its prospects for peace. He could build an entirely different coalition, dumping the parties of the right and sharing power with Tzipi Livni’s centrist Kadima party. Let’s remember: Livni won more votes than Netanyahu in the last election. As Livni has made clear, the price for partnership is endorsing a two-state solution. If Netanyahu can’t stomach these choices, he’s likely to find evacuating even a few outposts will crack his coalition and force him to face the voters again.

Given that possibility, a critical element is missing from Obama’s diplomacy. He, too, has an audience that he needs to address: the Israeli public. By insisting on a settlement freeze, he should tell Israelis, America is showing its commitment to Israel. The president must not leave the Israeli public stage to Netanyahu’s outpost farce.

Gershom Gorenberg is the author of “The Accidental Empire: Israel and the Birth of the Settlements, 1967-1977” (Times Books, 2006). He is a senior correspondent for The American Prospect and blogs at SouthJerusalem.com.