Why Antonin Scalia Was So Influential — and Bad for the Jews 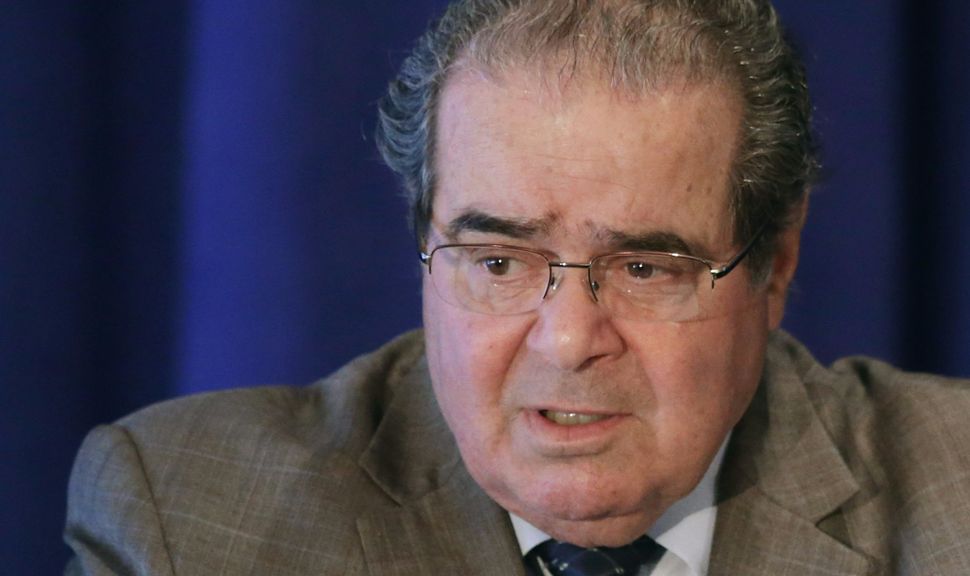 Supreme Court Justice Antonin Scalia has died suddenly at 79. His legacy is that of a staunch conservative and religious traditionalist. J.J. Goldberg explains in this 2009 piece why his views were so dangerous for Jews.

Justice Antonin Scalia is rightly known as the most conservative member of the very conservative Supreme Court led by Chief Justice John Roberts. The image is so strong that the rest of him gets overlooked. He’s easily the court’s most colorful justice. He’s gone hunting with Dick Cheney and returned unscathed.

His volatile courtroom demeanor is legend. So is his outspoken reverence for tradition, both legal and cultural. Likewise his pious Roman Catholicism.

His name recalls an earlier figure in Western jurisprudence, Antoninus Pius, the second-century Roman emperor whose own name means “pious.” A scholarly, even-tempered, compassionate ruler, he pioneered the legal principle of “innocent until proven guilty.” He was a great benefactor of Judaism, restoring it to legality after the Hadrianic persecutions. The emperor’s first name, Antoninus, is a Latin diminutive, roughly meaning “little Anthony.” You might call him Little Anthony the Imperial.

But we digress. What of our modern-day Antoninus? Scholarly? Definitely. Compassionate? Not so much. Even-tempered? Get real. Benefactor of the Jews? That’s what we’re here to examine. From what’s generally known, we could call him Little Anthony the Imperious.

For instance, just the other day, October 7, Scalia put his imperious stamp on the Supreme Court’s new fall season, offering a snarling display of bile that startled even veteran court-watchers. The justices were hearing arguments in a case involving an eight-foot metal cross erected as a war memorial on federal parkland somewhere in California’s Mojave Desert. A lawyer from the American Civil Liberties Union argued that a cross is a Christian religious symbol and placing it on federal property, even to honor the hallowed dead, violates the Establishment Clause of the First Amendment, banning governmental “establishment of religion.”

Scalia, according to all published accounts, expressed astonishment that anyone might somehow think that “the cross doesn’t honor non-Christians who fought in the war” right along with Christians. “The cross is the most common symbol of the resting place of the dead,” he insisted. ACLU lawyer Peter Eliasberg countered that the cross is a specifically Christian symbol, that it signifies Jesus as savior and that it never appears on, for example, Jewish graves. As he spoke Scalia turned “visibly angry,” by all accounts, and finally snapped: “I think that’s an outrageous conclusion.”

The pesky cross first appeared in 1934, bolted to a rock in what is now the Mojave National Preserve, put there by the now-defunct Death Valley post of the Veterans of Foreign Wars. In 1999 a retired preserve administrator, Frank Buono, asked the National Park Service to remove the cross as a First Amendment violation. The Republican-led Congress promptly banned the use of federal funds to dislodge it. Buono sued in federal court. Congress then declared the rock and its immediate surroundings to be private VFW property and thus exempt from constitutional restrictions — for as long as the cross remained there. Since then the case has bounced back and forth between various courts, which keep ordering the cross removed, and Congress, which blocks it.

The legal issues before the Supreme Court are almost comically technical, considering the swirling emotions. The main question is whether the VFW land swap was genuine, given that it was conditional. Another is whether Buono had legal “standing” to sue. U.S. Solicitor General Elena Kagan argued that Buono, an avowed Catholic, couldn’t be offended by a cross, and therefore he can’t claim religious “injury” as required in First Amendment lawsuits.

What’s at stake is much bigger, though. This is the Roberts Supreme Court’s first tangle with the Establishment Clause. Amid our bitter divisions over the place of religion in public life, this will be America’s first look at where the court might steer us over the next generation. Scalia is the intellectual anchor of the court’s conservative majority. His views will be critical.

Not surprisingly, Scalia’s outburst has evoked a flood of comment, mostly negative. It’s coming from across the board, with the notable exception of the major Jewish organizations, which have been weirdly silent.

The most frequent complaint is that the justice wants to secularize the cross, “to gut Christian symbols of their Christian meaning in order to justify their deployment by government,” in the words of the Catholic weekly magazine America.

“It’s not really a cross, the place where Jesus Christ died for the sins of all mankind,” one popular blogger wrote on the Atlanta Journal-Constitution Web site. “No, Scalia asks us to pretend that it’s just a horizontal stick tied to a vertical stick, a generic, bland little device, ‘the most common symbol of the resting place of the dead’ for all faiths.”

Alas, they misunderestimate the justice. He’s not aiming to neuter the cross. He affirms its Christian sanctity. But as a radical majoritarian he expects non-Christians to accept its dominance. By “common symbol” he doesn’t mean the cross is a neutral marker accessible to all in common. He means it’s the marker most commonly seen in cemeteries, and that non-Christians should sleep peacefully knowing they lie beneath the symbol of mankind’s common savior.

Scalia makes no secret of his beliefs. Just weeks ago, in a September 16 interview with the Brooklyn-based Haredi newspaper Hamodia, Scalia declared that the Establishment Clause “does not mean that government cannot accommodate religion, and indeed favor religion.”

The Supreme Court, he said, “has a series of opinions that say that the Constitution requires neutrality on the part of the government, not just between denominations, not just between Protestants, Jews and Catholics, but neutrality between religion and non-religion. I do not believe that.”

In other words, the government can favor religion, promote it, subsidize it, encourage it — it just can’t establish it. Whatever that means.

That’s the outrageous conclusion in all this. No one stands to lose more from it than the Jewish community. Jews have fought hard to achieve a truly neutral public square where all are equal. Rolling back that neutrality means rolling back Jewish freedom.

Benefactor? Not so much.

Contact J.J. Goldberg at goldberg@forward.com and read his blog at [blogs.forward.com/jj-goldberg][1]

Why Antonin Scalia Was So Influential — and Bad for the Jews