Don’t Take Hamas’s Goals Out of the Equation 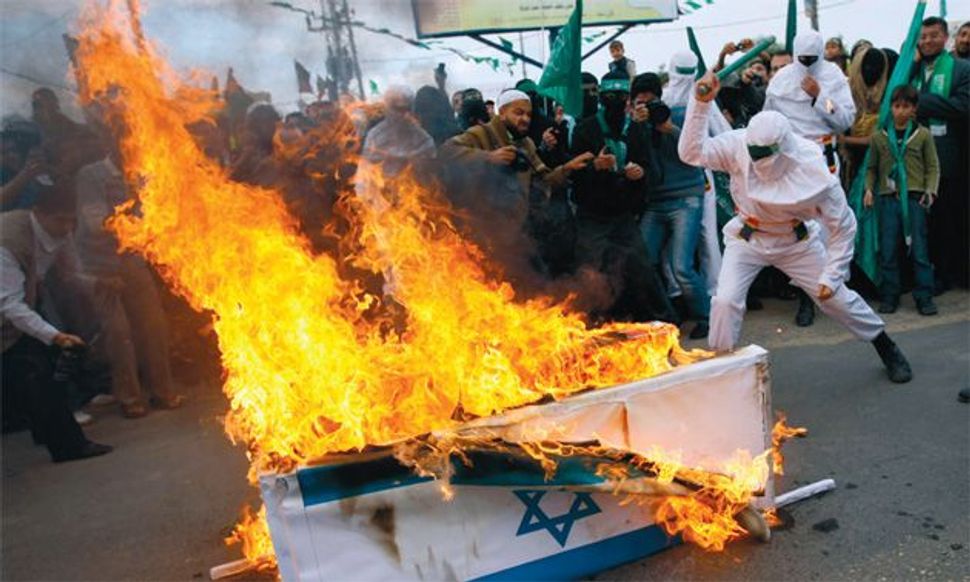 What They Want: Gazans, including some dressed as suicide bombers, burned a mock coffin covered in an Israeli flag in December 2009. Image by Getty Images

Why do the debates over the morality of Israel’s responses to Hamas never seem to produce a consensus? A debate broke out last year after Israel’s military campaign in Gaza, and another after the publication of the Goldstone Report. Recently we have found ourselves in the midst of yet another debate in the wake of Israel’s botched raid on the Free Gaza flotilla, this time about the justice of Israel’s blockade.

But these arguments never seem to arrive at a conclusion, and that’s because, at bottom, the disagreement touches on a philosophical divide over international human rights law, with an establishment view on one side and, on the other, an emerging insurgent view, with each side screaming past the other.

Earlier this year, Kenneth Roth, executive director of Human Rights Watch, presented the establishment view to a reporter from The New Republic. The reporter asked Roth why Human Rights Watch did not issue judgments on Iranian President Mahmoud Ahmadinejad’s public threats against Israel’s existence. Roth responded: “Let’s assume it is a military threat. We don’t take on governments’ military threats just as we don’t take on aggression, per se. We look at how they behave. So, we wouldn’t condemn a military threat just as we wouldn’t condemn an invasion — we would look at how the government wages the war.”

It is indeed true that the laws of war judge the methods used in fighting the war but not the goals that motivate the combatants. The Goldstone Report, which used the laws of war to assess Israel’s actions in Gaza during Operation Cast Lead, lambasted many of the tactics deployed against Hamas and accused Israel of committing possible “war crimes” and “crimes against humanity.”

But the laws of war are only one portion of human rights law. And many perfectly reasonable people have soured on the notion that the laws of war should be the only measure by which Israel’s actions against Hamas are assessed, precisely because these laws do not allow us to take into account Hamas’s goals. These people have read the Hamas charter, which articulates a virulently anti-Semitic and genocidal ideology and calls for Israel’s destruction. And they worry that these fanatical doctrines may, in fact, reflect Hamas’s true intentions and dictate its future actions. (And they know that Hamas’s patron, Iran, is pursuing a nuclear capability that could transform rhetorical threats against Israel into genuine existential dangers.)

Unlike the laws of war, the application of the Genocide Convention demands an analysis of goals and, therefore, of ideology. The concept of genocide addresses a situation in which innocents are killed solely because of their group membership, with the ambition of destroying the group, in whole or in part. Intentions — not just current actions — are a focus of the genocide law.

Fulfilling the mandate of the Genocide Convention necessarily involves ideological analysis early on in a conflict. Because genocide was considered the “crime of crimes,” the convention calls for prevention, not just punishment after the fact. One form of speech — incitement to genocide — is actually criminalized in the name of genocide prevention.

Viewed through the lens of the Genocide Convention, Israel’s actions against Hamas — a movement whose charter explicitly calls on Muslims to seek out and kill Jews — seem more sympathetic. Some of Israel’s responses, such as the blockade on certain civilian goods, were intended to weaken Hamas by raising the cost of continued popular support. From the perspective of genocide law, Israel’s actions can be justified as efforts to stop a regime with genocidal intentions.

Which human rights law should be used to assess the morality of Israel’s actions against Hamas? There is no simple answer because each law illuminates certain aspects of the conflict and obscures others, and both approaches have costs and benefits.

At first glance, the human rights establishment’s approach appears more scientific. Actions are visible, while goals are mental states, which are more difficult to assess using empirical methodologies. The establishment approach will often lead to appropriately sober moral judgments. Sometimes a political group’s fanatical doctrines are just meaningless blather; this method will never make the mistake of granting too much latitude for action.

But history has shown that the failure to examine goals and ideology early on in a conflict can have catastrophic consequences. Historians and human rights activists have come to believe that the Khmer Rouge’s slaughter of more than 2 million Cambodians between 1975 and 1979 was a genocide. Scholars have reached this conclusion based on an intelligent analysis of the Khmer Rouge’s racist and totalitarian ideology, which had been publicly articulated by the early 1970s. Yet, as Samantha Power reported in her landmark 2002 book “A Problem from Hell: America and the Age of Genocide,” the leading human rights group at the time, Amnesty International, did not sound the alarm about the enormous threat posed by the Khmer Rouge. Nor, for that matter, did Amnesty describe the slaughter as a genocide until long after anything could have been done about it. Perhaps Amnesty missed the genocide because it didn’t pay sufficient heed to the Khmer Rouge’s ideology.

What will end the standoff between the two factions now fighting over the meaning of international human rights law? Ultimately, we need an open debate about Hamas’s doctrine and its bearing on Israel’s response. If the human rights establishment stubbornly continues to ignore this issue, over time human rights advocacy will come to seem like an expression of a narrow and dogmatic ideology, out of touch with reality and shorn of its ability to persuade.

Michelle Sieff is a research fellow at the Yale Initiative for the Interdisciplinary Study of Antisemitism. She is working on a book on the ideology of the modern human rights movement.

Don’t Take Hamas’s Goals Out of the Equation