A Civility Deficit? Or an Indignation Deficit? 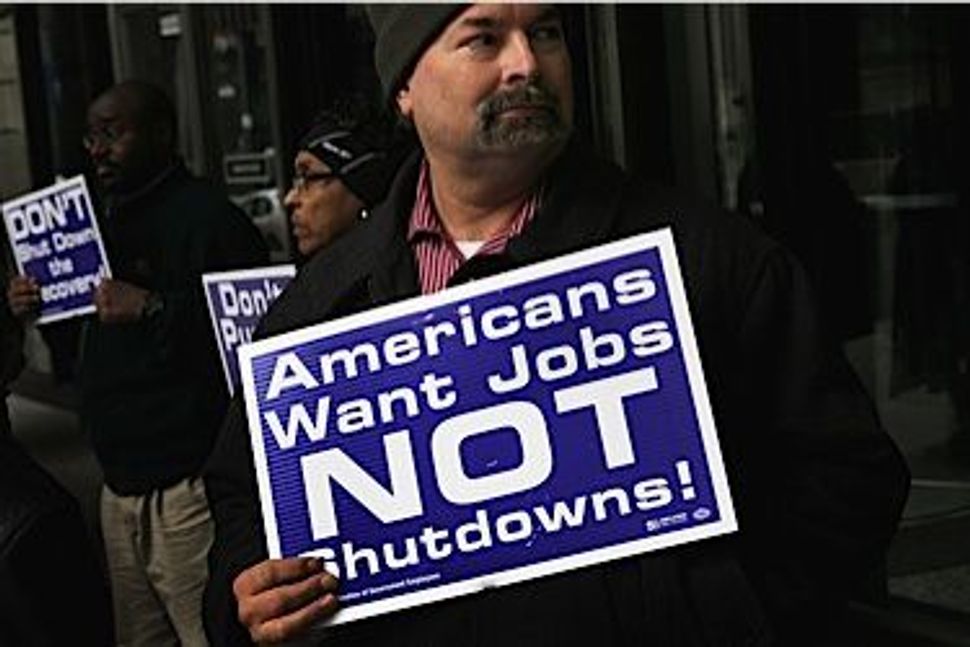 Indignant: Demonstrators weigh in on the federal budget debate on April 7 in Chicago at a protest organized by the American Federation of Government Employees. Image by getty images

Civility’s all the rage these days. Its most prominent practitioner is, of course, President Barak Obama, who somehow manages to stay cool in an environment that is wildly overheated.

Within the Jewish community, the push for civility has become almost ritualistic. Little wonder, given the very public breaches of civility these last two years or so, more generally given the absurd accusations that have become commonplace in the escalating rightist assault on the left. (Sorry, the politesse of symmetry doesn’t work here; the viciousness of the Jewish right is only faintly and infrequently echoed by the Jewish left.)

Some of my best friends are devoted purveyors of a code of civility, and I confess that I am one of many who have signed onto the community’s consensus statement on civility, spearheaded by the Jewish Council for Public Affairs. And it is possible that good things will thereby be accomplished, notwithstanding my impression that the principal product of the campaign for civility is that civil people spend time praising civility to one another.

The concerns I have about the civility campaign are not meant to denigrate the effort; they are meant to make certain that we do not lose important, even essential, qualities as we move from the preaching of civility to its practice. They are meant to preserve crucial distinctions between civility and its sometime counterfeits. We dare not, for example, hold up Caspar Milquetoast as an exemplar, a role model of civility. (Thanks to this comic strip character, the word “milquetoast” has entered the language, defined as “timid” or “submissive.”) The issues on which we disagree cannot but induce passion, and the arguments we have about such issues will be false unless they make room for the expression of our passion.

In fact, for all that the current deficit in civility is worrisome, I am more concerned by a deficit in indignation, even outrage. How in the world can a serious person not experience indignation in the face of the clownish behavior of Israel’s Knesset or the U.S. House of Representatives? How not to feel outrage at the persistent effort of so many Jewish organizations to infantilize the Jewish community, or at the awesome greed that so blemishes the practitioners of high finance?

The Knesset: A set of recently passed laws unveils the anti-Arab bias of the Knesset, and a continuing assault on liberal NGOs threatens Israel’s civil society and tradition of hardy debate. The Congress: The House has decided that carbon dioxide and greenhouse gases are not a pressing concern; science, apparently, got it wrong. Whether this is mere twaddle or merits contempt others can debate; that it sets the blood aboiling is beyond debate.

J Street again? No, J Street still. The brickbats are incessant. In synagogues across the country — synagogues tend to be conflict-avoidant — there is an informal ban on J Street, a ban so thorough that the possibility that a representative of J Street might be invited to make a presentation is not even raised. The curious thing about such a ban is that it is not imposed by mindless people, by people who believe that American Jews must act in lockstep with Israel’s government. There is some of that, to be sure, but more often, it’s simply all the noise that J Street’s opponents have kicked up that makes people nervous. Where there’s so much smoke, they conclude, there must be fire. The aspect of the controversy that most aggravates me is the assertion, loudly made in the Knesset at a recent hearing convened on J Street, that those who criticize the policies of Israel’s government do so to curry the favorable opinion of non-Jews, an outrageous and utterly baseless charge.

And regarding the anger directed at the greed of those who manage our financial institutions, surely no explication is needed. Those who feel no anger on that score are emotionally stunted.

Anger, indignation, outrage: Legitimate responses to behaviors we daily witness. So what, in such a context, can civility mean?

Up to a point, it means that we must take care to listen to those with whom we disagree and try to understand their world. Up to a point, it means that in arguing with them, we do best when we acknowledge their legitimate concerns. But the inconvenient truth is that after a while, patience wears thin. “The truth” is not necessarily nor even often to be found at some sort of bloodless mid-point between black and white. One need not be insulting, nor offensive, nor disruptive in rebutting lies, deceits, and deceptions, but neither is one required to make nice. One is, it seems to me, required to take the case to the people, to organize and mobilize and simply leave the benighted or avaricious or sanctimonious or self-righteous others to their own devious devices.

But how can we be certain that our truths are true?

Sorry, we cannot be. But if, after examining them with adversaries and allies, they seem to us more true than not, then we (as they, for their part) must act on them. Passionately — and civilly, too.

A Civility Deficit? Or an Indignation Deficit?