Four Questions on Our Budget Debate 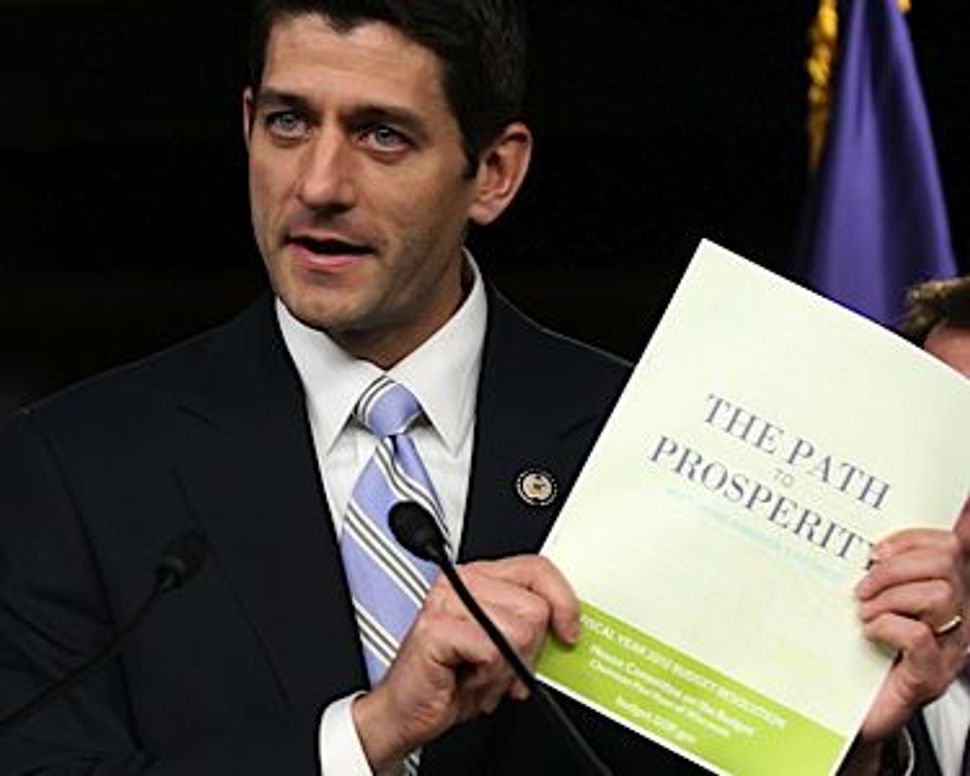 A New Path: Rep. Paul Ryan, a Wisconsin Republican, holds up a copy of the House Republicans? 2012 budget proposal at an April 5 news conference on Capitol Hill. Image by getty images

As American Jews prepare for Passover, Congress is in the midst of the most far-reaching budget debate in generations. At Seder, we tell an old story and attempt to draw new lessons from it. The budget debate is, similarly, both an old and a new story. So in the spirit of Passover, when we study the past in order to learn from it, we’d like to suggest that the American Jewish community ask Four Questions about the federal budget debate:

• Why during past budget debates did we succeed in reducing poverty, but this year, proposed cuts would increase poverty? The deficit-reduction packages of the 1990s reduced poverty and inequality while restoring fiscal order. The 1990 and 1993 packages contained increases to the Earned Income Tax Credit, which allows low-income families to retain more of their income. The 1993 package contained increased funding for food stamps, a program that the Census Bureau estimates kept 3.6 million people out of poverty in 2009. Finally, the 1997 package created the Children’s Health Insurance Program.

By contrast, House Budget Chairman Rep. Paul Ryan’s budget proposal for 2012 would change the status of Medicaid, which could cause millions of low-income Americans to lose health coverage. In 2009, a record 43.6 million Americans lived in poverty. Allowing states to deny health care coverage to low-income families would undoubtedly increase that number.

Ryan’s proposal would also convert the Supplemental Nutrition Assistance Program, formerly known as food stamps, into a block-grant program, giving states a lump sum of funds with which to administer the program. If the economy slows, states would not be able to respond to increased demand, negating the important role the program plays in automatically combating poverty during economically lean times.

• Why during all other budget debates did we discuss revenue and spending, but this year we discuss only spending? According to the Center on Budget and Policy Priorities, deficit-reduction packages under Republican presidents and Democratic presidents in 1982, 1984, 1990, 1993 and 1997 all included a mix of spending cuts and revenue increases. Not only do current proposals focus only on the spending side, but they also would actually give additional tax breaks to wealthy individuals and corporations. Ryan’s 2012 budget proposal reduces the top corporate and personal income tax rate from 35% to 25% — and this proposal comes after the extension of the Bush-era tax cuts that disproportionately benefit the wealthiest individuals.

As a percentage of GDP, the federal government takes in less revenue today than at any time since President Harry Truman occupied the Oval Office. There is no way to responsibly and morally restore fiscal order merely by cutting spending.

• Why during all other budget debates were programs that served low-income families exempted from spending cuts, but this year they are not? The Gramm-Rudman-Hollings Balanced Budget Act of 1985 contained the first automatic spending cuts if the deficit exceeded specific targets, but it exempted means-tested entitlement programs from such cuts. The Budget Enforcement Act of 1990 and the Statutory Pay-As-You-Go Act of 2010 contained similar provisions. Yet the Welfare Reform Act of 2011, introduced by the Republican Study Committee, singles out the Supplemental Nutrition Assistance Program for budget cuts, repealing benefit increases enacted by the American Recovery and Reinvestment Act, which was responsible for keeping 700,000 individuals out of poverty at the height of the recession.

The House bill targets college scholarships for low-income students, early-education funding for families in need, home heating assistance and an anti-hunger program that serves infants and their mothers. It does not, however, identify a single defense program or weapon system for elimination.

While the compromise brokered to fund the government for 2011 appears to evade some of the most controversial proposed cuts, H.R. 1 remains a template for ongoing negotiations over the debt ceiling and 2012 budget. The United States defense budget nearly equals the military spending of all other countries combined. Surely it should play some role in deficit reduction.

The budget challenges of the past demonstrate that fiscal responsibility and economic justice are not irreconcilable goals. We can reduce poverty and protect programs that serve the needy among us while also restoring fiscal discipline. As we recline at our Seder tables this year, let us remember those for whom poverty is their Mitzrayim, their house of bondage.

Mark Pelavin is associate director of the Religious Action Center of Reform Judaism, where Jonathan Backer is a legislative assistant.

Four Questions on Our Budget Debate