Hitching a Ride on the ‘Flytilla’ 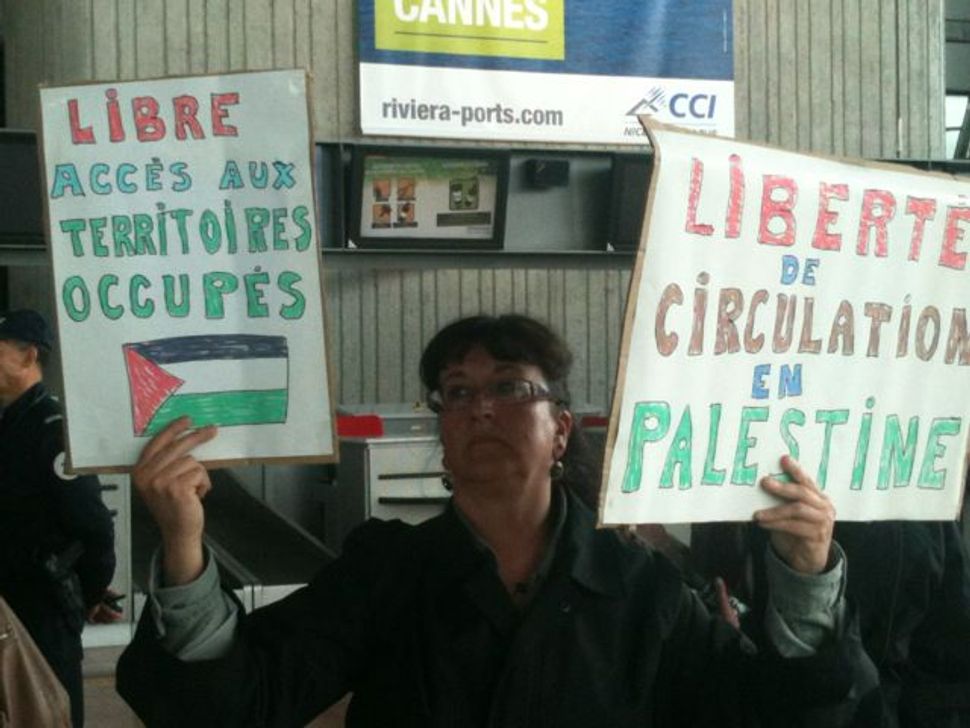 A scene from the airport in Nice, France. Image by Allison Kaplan Sommer

Having retired from the Passover-cleaning and Seder-making business, my in-laws have, in recent years, chosen to spend the holiday at a hotel abroad, every year at a different destination. My husband and I packed up our three kids this year and joined them for 10 days of matzoh-eating and sightseeing in Provence.

Since the holiday ended on a Friday, those who observe Shabbat were ‘stuck’ abroad till Saturday night, April 15.

While on vacation, I spotted the date of our return flight in web headline. What? More than 1,000 pro-Palestinian activists planning to fly into Ben-Gurion airport for a mass protest on April 15, of all days? Uh-oh.

As I read on about the steps Israel was taking to prevent the activists from flying, my trepidation mounted. I envisioned delayed or cancelled flights. I wondered what these activists were thinking when they chose that date. The planes would be full of Israeli families like ours: kids and their exhausted parents after long vacations in close quarters. I was thinking that after a few hours of the noise and chaos they might want to parachute out of the plane and abandon their campaign.

Braced for the worst, our family walked into a calm, quiet airport two hours before take-off time. There were lots of Israeli tourists returning home, and mixed in, several quiet and unassuming single travelers with very little luggage. Were they or weren’t they? To amuse ourselves, we started playing “Spot the Flytilla Members.”

As check-in time approached, the police arrived, and some army soldiers in camouflage and flak jackets with machine guns. (True Israelis, my kids felt safer, not more nervous, with lots of armed uniformed men around — a fact that leaves me with mixed feelings.)

But stayed peaceful — almost boring — for quite a while. Then, my husband, who speaks French, gave me a wink and gestured to the guy in back of us. A woman had approached the man and spoken with him briefly. My husband told me that she was wishing him good luck and telling him that he was “very brave.” That certainly didn’t sound like casual airport chat.

As we approached check-in security guards took our Israeli passports, checked them against a list and quickly let us through. The man who stood in back of us got very different treatment. Along with the others on the no-fly list, he was ushered aside by security and told that they couldn’t board. Some immediately acquiesced. But the man in back of us argued, declaring loudly that his rights under Article 13 of the UN Universal Declaration of Human Rights were being violated. (I looked up Article 13. It states: (1) Everyone has the right to freedom of movement and residence within the borders of each State. (2) Everyone has the right to leave any country, including his own, and to return to his country.)

As he began arguing, as if on cue, a group of supporters pulled out signs of protest and started a demonstration on the spot. Immediately, my inner journalist battled with my need to take care of three kids. My maternal instincts won out, so instead of interviewing the demonstrators, I headed for the ticket counter. We checked in, moved through security (European security! No taking off shoes!) and towards the gate. We could hear them chanting in the distance from the gate for nearly an hour. Passengers who checked in later said that as time went on they had grown more disruptive, trying to enter the airport via the luggage belt.

As we boarded the plane, our informal “Spot the Flytilla Member” game’ continued. There were several people travelling alone sitting near us — a woman in hijab, an African man in the seat in front of us, and a young Arab man in front of him praying silently with a small Koran. They each had one or two empty seats next to them — seats that I thought may have belonged to activists who were not allowed on the plane.

They were all quiet and kept to themselves, until a gregarious Israeli in a neighboring seat who had stayed at our Passover hotel started in with nosy questions: Is this your first trip to Israel? How long are you coming for? Are you a student? I began to feel sorry for them: First they had to put up with this guy, and soon they were certainly going to have to face interrogation at the airport. Activists or not, did they really deserve to suffer twice?

As we landed and the plane taxied, my son immediately said, “Look, they are taking us to Terminal One.” Indeed, our flight, presumably with others on which Flytilla participants were present or suspected, was diverted to the old Ben-Gurion terminal. As we headed for passport control, surrounded by stern-looking security types, the passengers whom I thought might be activists, were quickly corralled into a line and headed off for interrogation.

It was a sneaky move, diverting the “suspect planes” to Terminal One, when the media had been waiting, bored, in uneventful Terminal Three.

Those of us lucky enough to escape interrogation, once we got by passport control were bussed back to Terminal Three. As we exited, we saw no left-wing “Welcome to Palestine” activists, only two counter-protesters, swathed in Israeli flags, holding signs telling us to “Love Israel.”

And so our little Flytilla adventure was over. Heading home in the taxi, we reflected on the experience. My husband, always the pragmatist, said it had worked out great for us – there were empty seats on a crowded flight, and because of the diversion to Terminal One our passport process was expedited and went faster than it ever had. He said he’d be happy to accompany the Flytilla again next year.

Intellectually, I agreed with those who argued the Israeli response to the Flytilla was overkill, raising its profile and confirming the beliefs of those would vilify Israel as an evil and oppressive country, especially now that some of the activists are in prison and are joining Palestinians in a hunger strike. Of course, a better PR move would have been to greet them with flowers politely as a democracy that has nothing to hide.

And yet, when I felt vulnerable standing on that check-in line in Nice and inside that confined airplane with my kids. I guess that as a member of a generation eternally scarred by 9/11, airplanes and angry political protest will never mix for me. Demonstrators and activists certainly have the right to enter Israel and express their opinions. But I was secretly, ashamedly, grateful for the overkill that I had so opposed.

Hitching a Ride on the ‘Flytilla’