Global Calculus of Horror and Destruction 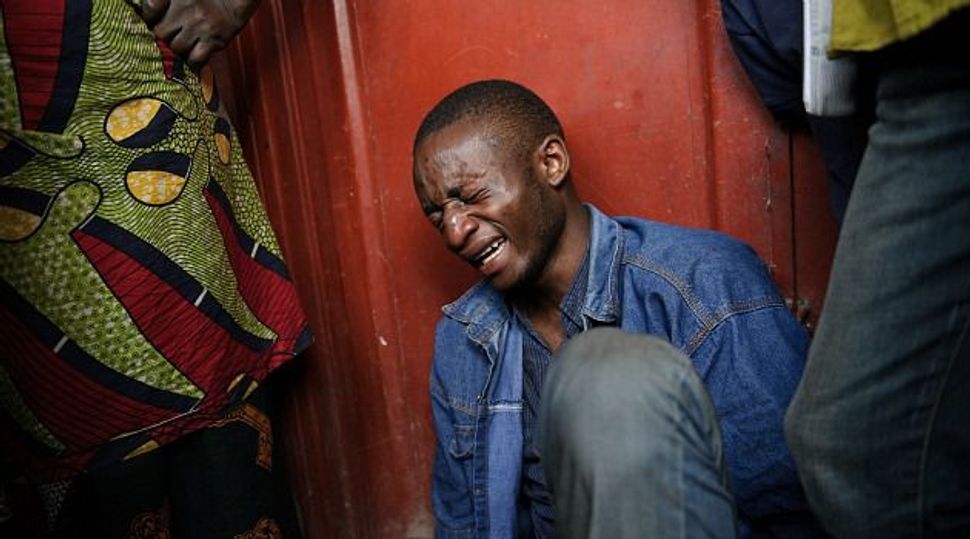 His Tears Are Real: A Congolese man weeps after discovering the body of his father, who was killed the ongoing unrest in the east of that vast African land. Image by Getty Images

On Tuesday, November 20, while negotiators from at least six nations, two terrorist movements and the United Nations were working frantically in Cairo and Jerusalem to nail down the details of an Israeli-Hamas cease-fire, the violence in the field was continuing and reaching new heights.

Rockets killed two Israelis that day, bringing Israel’s death toll in the weeklong flare-up to five, including four civilians. At least 150 rockets were fired at Israel, including, for the second time in a week, a rocket that was aimed at Jerusalem but landed in the West Bank. Targeting Jerusalem was a particularly shocking escalation, given that a poorly aimed rocket fired at Israel’s capital might just as easily hit an Arab neighborhood as it would have a Jewish one. A bus bombing in Tel Aviv the next day, the first in six years, only heightened tensions.

On the Gaza side, 31 Palestinians were killed that Tuesday in Israeli attacks on 130 targets, according to Reuters. That brought the seven- day death toll in the Hamas-ruled enclave to about 135, including 53 civilians. Another six Gazans were shot to death on the street by Hamas gunmen on suspicion of collaborating with Israel.

The week of Israeli-Palestinian bloodletting riveted the world’s attention and dominated headlines. But it was not the only killing in the region, or the worst. In Syria that Tuesday, 61 people were killed in fighting, bringing the death toll in that country’s 20-month civil war to nearly 38,000, according to the rebel-linked Violations Documentation Center. Of those killed that day, 29 died in a clash in the mostly Kurdish village of Ras al-Ain, near the Turkish border, between free Syrian army rebels, who had captured the village that day, and rebels linked to the Kurdish Workers Party, who are fighting their own liberation war against Turkey, the Syrian rebels’ ally.

Some 2,300 miles due south that day, in the Democratic Republic of the Congo, a Tutsi rebel militia known as M23 captured the eastern provincial capital of Goma after four days of fighting that killed 151 people. It was the latest round in a civil war that began in 1998 — itself a spinoff off the 1994 genocide in neighboring Rwanda — and was supposed to end in 2003, when a treaty was signed, but didn’t. The 14-year conflict has left an estimated 5.4 million dead, either from fighting or from disease and deliberate starvation directly related to the fighting. It’s the world’s deadliest conflict since World War II, and it won’t end.

How do we decide which killings move us and which don’t? In large part, of course, it’s tribal loyalty, which isn’t necessarily a bad thing, though we try to dress it up in moral or logical arguments. Commentary magazine blogger Evelyn Gordon complained on that bloody Tuesday that Gaza’s deaths were being splashed across the top of Page 1 of the venerable International Herald Tribune and attracting a fl ock of world leaders to Cairo and Jerusalem in search of a solution, while Syria’s dead landed on the bottom of Page 4. “Syrian lives, it seems, are cheap in the eyes of the international media,” she wrote.

One could observe that the diplomats gave up on Syria months ago because they couldn’t fix it, and that newspapers habitually cover what’s new and exciting. But those are excuses.

If we’re talking about relative suffering, as she seems to be, then basic human compassion would keep our eyes fixed on Syria’s agony. “By any standard,” Gordon wrote, “it’s a humanitarian crisis of vast proportions.”

The truth is, though, that morality and compassion aren’t simple calculations. If they were, we’d all have Congo at the top of our agenda. The Israeli-Palestinian confl ict would be simpler, too. In the seven years since Israel withdrew its troops and settlers from Gaza in 2005, the repeated exchanges of fire over the fence have taken a total of 53 lives on the Israeli side and 3,000 in Gaza. Upward of 7,000 rockets have been fi red at Israel. No one has counted the shells Israel has lobbed back at Gaza.

Much of the world looked at those numbers and concluded that Israel, however justified in its fury over the bombardment, was brutally overreacting.

Israel’s friends looked at the same numbers and wondered what sort of political leadership willingly subjects its people to the sort of devastation that the Gaza rockets inevitably provoke. Before the latest round, Hamas and the smaller terror factions had been escalating their shelling steadily for weeks. On November 10, an Israeli army jeep was hit with an anti-tank missile, wounding four soldiers and infuriating Israel. What perverse logic could prompt the Hamas leadership to so recklessly disregard its population’s welfare? A partial answer is that Hamas wants to provoke Israel into overreacting. It knows that Israel’s pummeling of Gaza will be broadcast around the world, making Israel appear the aggressor regardless of the provocation. Positioning its weapons in the midst of crowded residential neighborhoods, then daring Israel to come in and demolish them, Hamas produces images of human suffering that inevitably damage Israel in world opinion, isolating and weakening it.

The wonder is that Israel falls into the trap time after time. What can it be thinking? What can Israel possibly gain from these conflagrations that’s worth its steadily worsening global stature?

Some critics believe Israel has ulterior motives, principally keeping the conflict going to avoid negotiation over the territories. Case in point: The Hamas terror master whose November 14 assassination touched off the latest round, Ahmed al-Jaabari, was also the most effective enforcer of Gaza ceasefires. At the time he was killed, he was reviewing a proposal for a long-term truce drafted by his top deputy and the very able Israeli backchannel negotiator, Gershon Baskin. If Israel simply wanted to halt the rocket fi re, as it now claims, it had an odd way of showing it.

In fact, each time Israel shoots its way back into Gaza it destroys vast stores of Hamas munitions, buying its citizens a few more years of quiet. A yearlong barrage of 2,048 rockets from Gaza preceded Operation Cast Lead, the three-week Israeli incursion that began in late December 2008. The attack cost somewhere between 1,166 (Israel’s figure) and 1,419 (the Palestinian fi gure) Palestinian lives and only 13 Israeli lives, badly hurting Israel’s international standing. But the rest of 2009 saw only 160 rocket fi rings, and 150 in all of 2010. The attacks began to multiply again in mid-2011, topping 800 in the first 10 months of 2012. In November, Israel moved in again. This won’t be the last time.

Global Calculus of Horror and Destruction