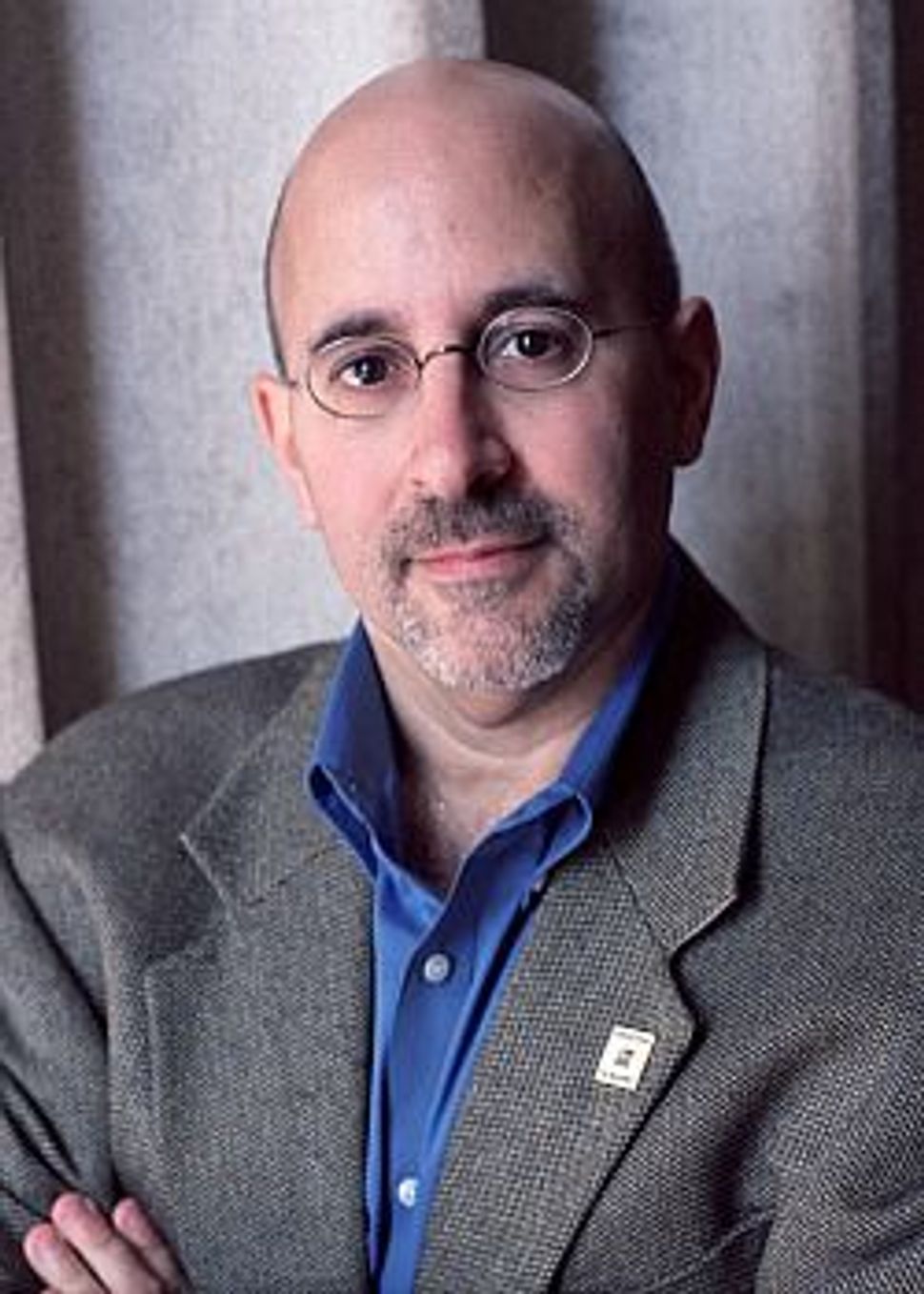 A long list of characters helped elevate a pair of marriage-equality cases to the Supreme Court, where they’ll be heard in 2013. But if one person deserves credit for the ascent of the marriage-rights movement, it’s Evan Wolfson. In 2003, when even gay people felt it a fringe cause, Wolfson founded Freedom to Marry as a “campaign to win marriage nationwide.” A decade later, the organization has helped align marriage rights in nine states and Washington D.C. — and doubled public support for marriage equality to what Wolfson calls “a clear majority”.

Wolfson came to the marriage-equality fight battle-tested; in the 1990’s, he served as co-counsel in an historic Hawaii marriage case that essentially launched the cause. Wolfson has also reaped some of the fruits of his labor. He married biotech consultant Cheng He last October after the State of New York passed the Marriage Equality Act, a bill he pushed for himself. Wolfson, 55, spoke to the Forward from his Chelsea office.

Michael Kaminer: When you started Freedom to Marry, did you imagine you’d see marriage equality debated in front of the Supreme Court?

Evan Wolfson: That was always the goal. Our strategy derives from the lessons of history, from how America does its civil rights business, and from how other civil-rights movements have made progress. The strategy has always said we achieve social justice once either Congress or the Supreme Court brings the country to a national resolution. But that national resolution doesn’t come at the beginning, or even the early middle. It comes after a patchwork of struggles, and progress, and defeats, with some states moving faster while other states regress. The same strategy that brought us to this point of triumph and transformation will bring the freedom to marry home nationwide.

Your 2004 book was called “Why Marriage Matters: America, Equality, and Gay People’s Right to Marry.” Why does marriage matter?

Marriage matters because it is the vocabulary of love, commitment, family, and connectedness, and it’s a way of helping people understand that gay people share aspirations to finding someone who’ll put up with us in life, whom we can build a life with, caring for that person, and being cared for by that person. Gay people are also part of families, and want to connect and strengthen our families. Under the law, marriage is also the language of full inclusion and respect, as well as of a vast array of protections and responsibilities, from birth to death, with taxes in between. And through marriage, we help people understand better how gay people are, and help advance our inclusion and full participation in society across all the things we care about, including but not limited to marriage. Marriage has been an engine of inclusion and progress in reducing discrimination against gay people.

Overall, how would you characterize the Jewish establishment’s role in the marriage-equality fight?

The Jewish role has been a proud and important one in our movement. Many leaders of the cause are Jewish. Many supporters and champions have been Jewish. And the Jewish establishment has been early and strong in support for gay people, their families, and the freedom to marry. The Reform and Reconstructionist movements have taken strong and explicit stands, as has the Conservative rabbinate.

Some Orthodox Jewish leaders have been vocal opponents of marriage equality. How do you respond?

They’re sadly out of step with social justice and with the needs of gay families, who they never seem to tend to or even address. They are also doing a real disservice to the very important values of religious freedom that really matter in America, and for Jews. This isn’t about forcing any rabbi, priest, or temple, or mosque, or church to perform a ceremony. But it’s in the interest of each of those to resist trying to dictate to the government who can get a civil marriage license. Jewish people have a real stake in protecting that religious pluralism and freedom.

The Orthodox ought to understand that.

People are entitled to their own religious views. But as a matter of pastoral care, you’d also think you’d hear more voices caring about families and communities that are enriched by the freedom to marry under the law. The Orthodox establishment’s opposition is a minority and out of step with where the vast majority of Jewish people are.

In the “Vows” column about your wedding in The New York Times, your parents sounded incredibly supportive. What kind of Jewish upbringing did you have?

I’m very lucky to have warm, loving parents who are also great examples of the value of marriage. They’ve been married now for 57-plus years. We had a beautiful celebration of their golden anniversary a few years ago.

They’ve always put their kids first, and they’ve always been there for us. It’s an important lesson I’ve always taken with me. We were sent to Jewish summer camp and Hebrew school, and we celebrated holidays. We had a Jewish consciousness and a Jewish life. In fact, the camp we attended, Boiberik [founded by the Sholem Aleichem Folk Institute in 1923, and closed in 1979] was part of the Yiddish social justice world. I learned the importance of tikkun olam, the importance of standing up for what’s right, the importance of caring about others. My parents also met at that camp, so it’s very important to my family.

Did you incorporate Jewish elements into your own wedding?

We did. It wasn’t a religious wedding, but we wanted to draw on many sources of inspiration and importance to us. So we got married under a chuppah, reflecting my Jewish background, made of four Chinese bamboo woven together, reflecting my husband’s Chinese ethnicity. It was actually quite beautiful and quite meaningful.

We also began the wedding ceremony by asking our sisters to light candles on a menorah that came from my summer camp. And at the end, we broke the glass together. The judge [Justice Rosalyn H. Richter, who sits on the Appellate Division of the State Supreme Court in Manhattan] who performed ceremony, a close friend, who‘s also Jewish, talked about many meanings of the breaking up glass.

And the one that was important to Cheng and me was that while we celebrate having won the freedom to marry in New York, and we’re getting married surrounded by family and friends, there are many places where gay people are denied freedom to marry, and many states and countries where the lack of freedom remains. We broke the glass to remind ourselves that the work is not yet done.