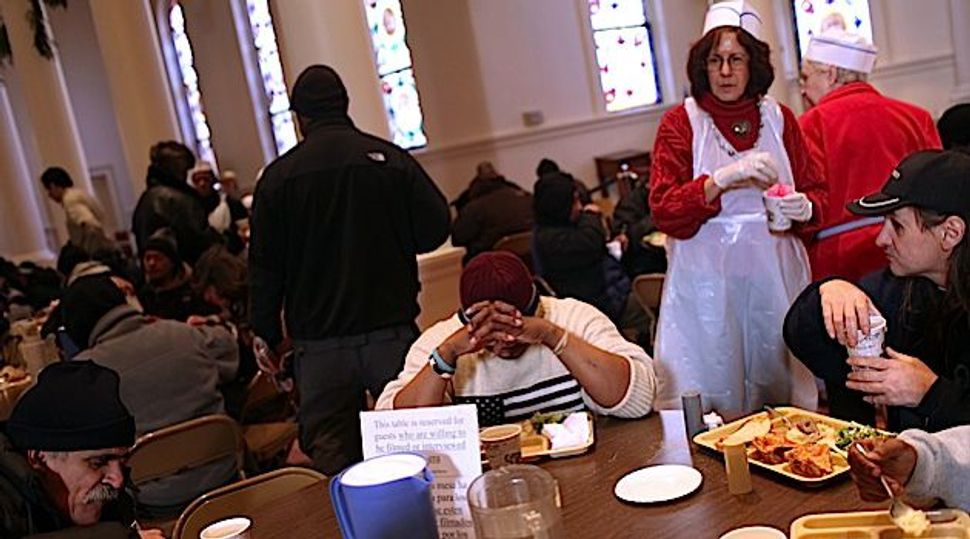 Not Enough: Hungry New Yorkers gather for a meal in a soup kitchen, but countless Americans still go hungry every night. Image by Getty Images

Let us speak of SNAP.

SNAP is the Supplemental Nutrition Assistance Program, formerly know and still best recognized as the food stamp program. And now it is in danger.

Here’s the story: SNAP has benefited enormously from the 2009 Recovery Act, which temporarily boosted SNAP benefits. But come November, the boost will end and benefits will be cut for every SNAP household.

What does that actually mean? According to the best projections (from the Congressional Budget Office), the cut will amount to $300 a year for a family of four.

That doesn’t sound like very much — but it works out to a benefit package of about $1.30 per person per meal, an amount that nutrition experts deem inadequate to meet a families’ basic food needs. That is the draconian level to which SNAP was reduced by Congress in 2010. SNAP beneficiaries include 22 million children (of whom 10 million live in what is termed “deep poverty,” with family incomes below half the poverty line) and more than nine million people who are elderly or have a serious disability.

Yes, there are many anti-hunger agencies, charitable organizations such as Feeding America, the nation’s largest anti-hunger organization which last years had a budget of $678 million and, of course, Mazon: A Jewish Response to Hunger. But the dimension of the hunger problem far exceeds the capacity of charitable organization to respond adequately. So, for example, if all Feeding America’s $678 million program budget were used to provide meals for people in need, that would feed each of the 50 million Americans struggling with hunger — or, as is these days the preferred term, “food insecurity” — for a total of, gulp, three days.

We get a more painful sense of the dimensions of the problem if we examine the extraordinary commitment of $2 billion by Walmart to the funding of anti-hunger programs. But the awesome truth is that even if Walmart were to assign all its net profits (roughly $15 billion in 2011) to the battle against hunger, that would cover less than 20% of the $78 billion government dollars allocated to SNAP in 2011.

All this has been brilliantly brought home by an array of agencies that have sponsored what’s called the SNAP/Food Stamp Challenge. Here, the work of the Jewish Council for Public Affairs has been exemplary. In particular, the JCPA has promoted something called the “FSC,” which stands for “food stamp challenge.” The FSC signs people up to get by, for one week, on what the average SNAP recipient is allocated per week: $31.50. By now, some thousands of people have accepted the challenge, and their testimonies are both a shock and an inspiration. Other Jewish organizations have joined in, encouraging their members to participate in the FSC. These include, among others, Mazon, the Rabbinical Assembly, the Reconstructionist Rabbinical Assembly, the Union for Reform Judaism, United Synagogues of Conservative Judaism, Uri L’Tzedek, the Cantors Assembly and the American Conference of Cantors.

Comes the question: If a decent diet is a right — and surely in a nation with such abundance of food as ours, it should be so regarded — does not that right merit a higher status that it is currently accorded?

Some will argue that we pay into Medicare and Social Security, and there’s no comparable participation in programs such as SNAP. But that surely misunderstands the core pay-in — to wit, our tax dollars. There’s much talk about the continuing importance of a social safety net – and if, as seems obvious, efforts to beat back hunger are part of what we mean by such a net, then it follows that SNAP should be untouchable.

But it isn’t, especially at a time when members of Congress are frenetically searching for ways to cut the nation’s deficit. That, presumably, is why Congress in 2010 passed legislation ending the increase it had approved in 2009’s Recovery Act. And that is why some people are now speaking of a “food cliff,” referring to the SNAP benefit cut scheduled to happen this coming November.

Now and then, there’s casual reference to “ending” hunger in America. Wouldn’t that be something! But it will not happen unless and until we understand that the underlying problem is not hunger at all; it is poverty. And while their sentiments are surely commendable, the fact is that the hunger agencies have their hands full dealing with the immediate food crisis of more that 50 million Americans; that is more than a sufficient challenge, and has more immediate resonance with the public at large than a call to arms to do battle with poverty.

So we are stuck, focused on symptom rather than cause. But before castigating ourselves, we should note that at least we are not insisting that the currently hungry be held hostage to far-off solutions. Still, while we ought not castigate ourselves, neither should we delude ourselves: The battle against poverty, so long delayed, cannot in conscience be indefinitely postponed. Such postponement reflects a moral deficit that is truly frightening.