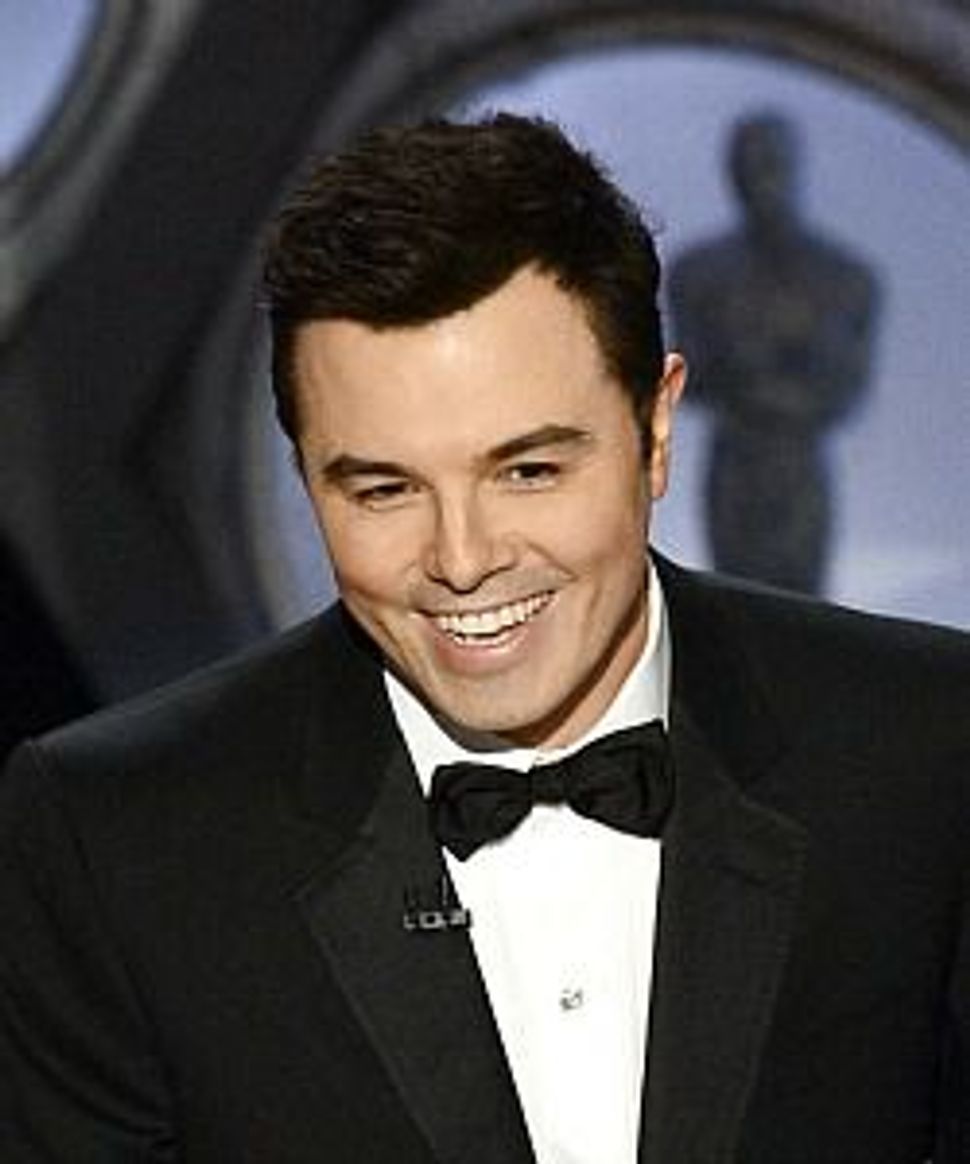 Watching gagmeister Seth MacFarlane’s off-color, take-no-prisoners performance as host of the Oscars on Sunday night and then observing public and press reactions afterward, two things become clear. The first is that a half-century after the Civil Rights revolution and 42 years after the debut of “All in the Family,” Americans are still hopelessly divided on the limits of propriety in ethnic and other stereotypes in our humor. Second, none of us has much of a handle on exactly what bothers us when, and where the line should be drawn, if at all.

I was thinking of clearing the whole thing up for you this evening, but I have to run to a dinner date, so I will limit myself to three key observations.

No. 1. Most of the public seems to consider MacFarlane’s jabs as a package—that is, they tend to find his jokes either wholly tolerable (or, to some, very funny) or wholly offensive. Most commentators saw no reason to distinguish between the adolescent lewdness of his song-and-dance number about women’s breasts, his nasty jabs at Jean Dujardin, Chris Brown and Rihanna, his racial insults of Denzel Washington and Eddie Murphy, his morbid Abraham Lincoln joke and the shocking bit about Jews running Hollywood. Either you liked the stuff or you didn’t. Either way, you knew what you were getting when they hired the creator of “Family Guy,” and you sure got it. (For the record, I’m a fan.)

Except for one segment of the public. Many next-day commentators in the Jewish community singled out his Jews-run-Hollywood bit as being beyond the pale of decency, while his other routines were presumably run-of-the-mill, take-it-or-leave-it bits of “Family Guy” tastelessness. In case you missed it, you can watch the clip after the jump.

The controversy involves a minute-long segment of the three-and-a-half-hour Oscar telecast in which “Ted,” a racist, foul-mouthed animated teddy bear created by MacFarlane, suggests that it’s best to be Jewish if you “want to continue to work in Hollywood.” Actor Mark Wahlberg, appearing on stage with him, then calls him “an idiot.”

The protests weren’t a conservatives vs. liberals thing. Jewish objections came from both right and left.

After asking around, I get the sense that there are quite a few people who felt similarly aggrieved, thought the Jews-run-Hollywood bit crossed a line that the other jokes didn’t, but couldn’t put their finger on why it was worse than the other jokes and ended up feeling guilty about their own presumed ethnocentrism.

No. 2. So let me suggest a reason why the crude Jewish joke was different from all the other crude ethnic and sexual jokes. It’s the age-old test of the limits of freedom of speech: No one has the right to shout “fire” in a crowded theater. That is, freedom of speech does not include the right to make public utterances that may be reasonably expected to cause immediate danger to others.

As the Anti-Defamation League correctly pointed in its Monday-morning statement lamenting the routine, Hollywood types inside the theater won’t take the joke seriously, but the audience outside the theater isn’t the same. The “global audience of the Oscars” is “upwards of two billion people,” the league said, “including many who know little or nothing about Hollywood or the falsity of such Jewish stereotypes.” Under the circumstances, “there’s a much higher potential for the ‘Jews control Hollywood’ myth to be accepted as fact.”

In a way, though, that understates the problem. It’s not just that some unknown number of people in other countries might imbibe prejudice from the Oscar broadcast—or, more likely, feel they’ve gotten authoritative confirmation of what they already believed. No, the serious problem is that in today’s global environment, it’s entirely reasonable to suppose that some Mohammed Merah jihadi wannabe somewhere in Toulouse or Antwerp or Copenhagen will see the clip and find that it’s just the extra push he needed to go and do something about it.

That’s why this crude joke is different from all those other crude jokes: The others have the power to anger and insult. This one has the power to kill. Right now, in today’s world, given the worldwide audience of the Oscars, it’s like shouting “fire” in a crowded planet. Maybe.

No. 3. On the other hand, objecting to the myth that Jews control Hollywood raises serious questions of definition. If anybody can genuinely be said to control Tinseltown, it’s probably the 25 people who run the 12 main film studios—that is, the chairman (in one case, two co-chairmen) and president of each. Of those 25, 21 are Jewish, or 84%. That’s simple math. You could define “control” differently—throw in the top agents and producers, leading directors, most bankable stars and so on—and the proportion of Jews would drop, but it probably wouldn’t get down anywhere near the 50% mark. There’s a reason why Nate & Al’s stays in business.

Given the numbers, we have to decide what we mean by “myth.” Here there’s an important distinction to be made. The critical word to look for is “the,” as in “the Jews control Hollywood.” We use the definite article to describe a deliberate act by an organized group. It’s one thing if I say “Americans crossed the border into Mexico today.” That happens every day. If I say “the Americans entered Iraq,” I’m speaking of an organized group, acting in our name, sent by our government with our tax dollars. We’re all responsible. Ditto “the French went into Mali.” It’s one thing if “Australians joined the fight in Afghanistan,” and a very different thing if “the Australians joined the fight.”

Just so the Jews. It’s fair to say “the Jews” play a big role in getting foreign aid through Congress—lobbyists are acting in our name with our charity dollars. That’s a fact of politics. By contrast, Jews run Hollywood, but the Jews don’t. It’s a sociological observation, but not a political one. There’s no “secret synagogue” (Seth MacFarlane as “Ted,” satirically quoting “The Protocols”) that meets in New York or Brentwood to decide what films to shove down the gentiles’ throats. That’s a myth, and it’s a persistent, pernicious one. It’s part of a malign delusion that Jews conspire to rule the world. Unfortunately, a great many people believe it.

Having said that, the strong presence of Jews in Hollywood surely has some sociological and cultural implications. We know that Jews, like any other subculture, have certain group patterns of behavior. We tend to be liberal, inquisitive, talkative. There’s a whole sub-branch of sociology devoted to studying how we tend to act. But because of our sensitivities, it’s nearly impossible to discuss publicly how such patterns might affect the society around us.

Example: In April 1996, Marlon Brando appeared on “Larry King Live” and talked about overly negative portrayals of blacks in Hollywood movies. “Hollywood is run by Jews,” he said. “It is owned by Jews, and they should have a greater sensitivity about the issue of—of people who are suffering. Because they’ve exploited.” In response, his world exploded and he found himself apologizing in tears the next day, saying he didn’t know what had come over him. He began his career as an apprentice and protégé of Yiddish theater legend Stella Adler. He volunteered his services as an actor in a historic pageant for Jewish Holocaust victims during World War II, when few were speaking out. In 1996 he was making an interesting, challenging observation about a group with which he was very familiar, and very sympathetic. All that was lost in the hysteria.

Right around the time of Brando’s gaffe, Seagrams Corp. was taking control of Universal Pictures, and the biggest betting game around was whether Universal chairman Lew Wasserman and president Sid Sheinberg would be toppled. In the middle of it, the New York Times ran a box on its front business page showing the top 20 executives at the top 10 studios. 19 were Jewish.

There are dangerous, evil myths told about Jews, but there are also uncomfortable truths. It’s time we learned how to tell the difference, and to defend ourselves honorably from the one while learning from the other. What happened to Marlon Brando was a shame. It shouldn’t, mustn’t happen to Seth MacFarlane.