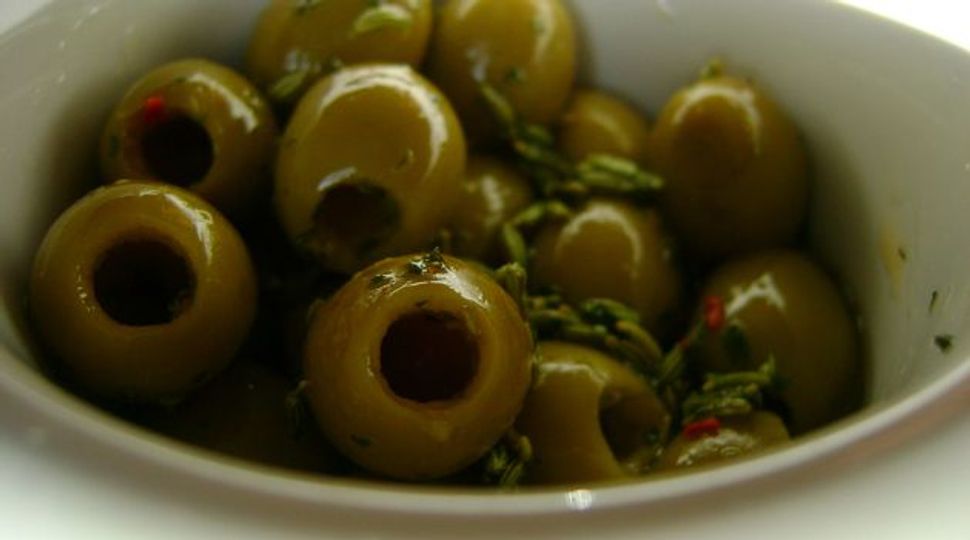 Symbol of Hope: Rebecca Vilkomerson says the olive tree is a universal and ancient symbol of hope and peace. Image by CeresB via flickr

Jews who want to challenge the community use foods as a way symbolizing those challenges on the most heartfelt of Jewish rituals: the Passover seder. Each day, we will examine a different food and what it means.

Passover has always been my favorite Jewish holiday. Even as a child, I remember being slightly embarrassed that I was moved to tears yet again by the story of Moses leading his people to freedom. As an adult, I recognize how deeply the story of the Exodus imprinted itself upon me — with its emphasis on the importance of fighting for liberation and self-determination, on community organizing and resistance against oppression.

The great genius of the Seder is how at its core it is always the same, but it is also flexible enough to integrate new traditions and local variations. As a teenager, I remember that my mom, my aunt and I led a small rebellion as we took our turns reading, by insisting on changing each exclusively masculine pronoun to include the feminine, as well. After a few years of that we had everyone in our family doing the same.

I’ve celebrated a Seder for a living wage in Baltimore and for Mumia Abu Jamal in San Francisco and, perhaps most moving, I participated in an enormous outdoor Seder in Tel Aviv with homeless Sudanese refugees who had just literally experienced yetziat mitzrayim, the exodus from Egypt.

Bringing contemporary social and economic justice issues to the Seder is very much in keeping with one of the key messages of the Haggadah: In every generation, each person must view himself or herself as if personally liberated from Egypt. That is, we must remember what it is to be oppressed, to face injustice and to yearn to be free. But it goes a step further. If we personally remember that we were liberated from Egypt, doesn’t that empathy obligate us to work to make sure that every person enjoys that same freedom?

Passover has become a complicated holiday for me. I am still moved and inspired by the recounting of the Exodus. But the irony of celebrating Jewish freedom and deliverance into Israel, especially when, in today’s Israel, it is the Palestinians who face oppression at the hands of the Israelis, makes it painful. Yet it also renews my commitment to pursue the kind of justice that the story of Exodus teaches us is part of our legacy.

I bring this commitment to the Seder by including an olive on my Seder plate. The olive tree is a universal and ancient symbol of hope and peace. And sadly, the destruction of Palestinian olive trees by Israeli settlers and the Israeli army is just one example of the way that Israeli policies systematically deny Palestinians of even their most basic rights.

In February, I spent a day in the Palestinian village of Jayyous. I saw with my own eyes where ancient olive trees had been recently torn from the land. I saw the Caterpillar bulldozer that had ripped them from their roots, with its owner in tears nearby. And I saw pictures of where the stolen olive trees had been prettily replanted in a nearby settlement.

An olive on my Seder plate reminds me to ask myself, as Rabbi Brant Rosen, co-chair of the Jewish Voice for Peace Rabbinical Council, writes: “How will we, as Jews, bear witness to the unjust actions committed in our name? Will these olives inspire us to be bearers of peace and hope for Palestinians — and for all who are oppressed?”

Rebecca Vilkomerson is the executive director of Jewish Voice for Peace.