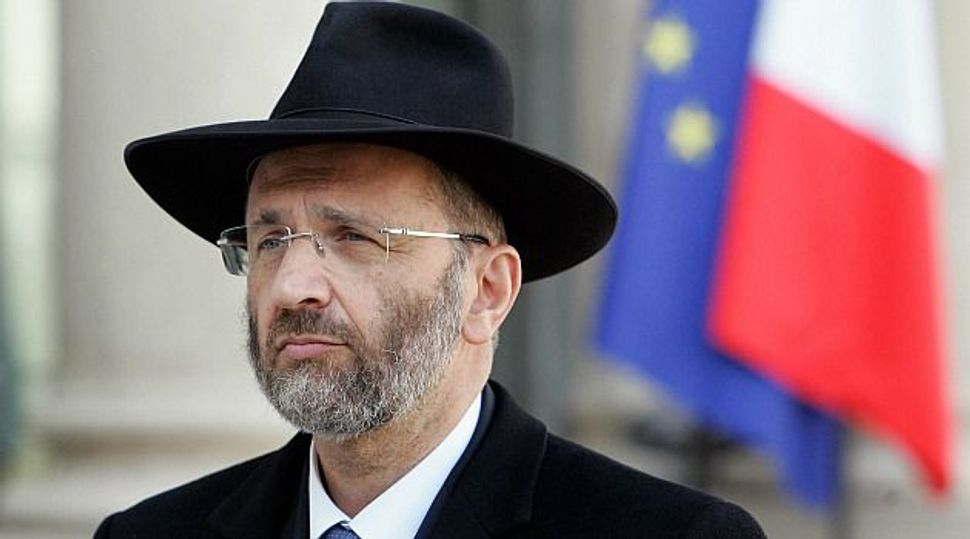 Self-Inflicted Scandal: Gilles Bernheim had plenty of enemies on all sides of the Jewish spectrum. But he has only himself to blame for his downfall as France?s chief rabbi. Image by getty images

Forty years ago, “The Mad Adventures of Rabbi Jacob” had French audiences doubled over in laughter. Gerard Oury’s frantic comedy of an anti-Semitic businessman who finds himself mistaken for a famous rabbi — don’t ask — smashed box office records. The timing was important: Oury’s anarchic comedy reflected the end of a 30-year run of dramatic economic growth, the end of Charles de Gaulle’s authoritarian rule and the end of the republican belief that in order to be French, one must not publicize one’s religion.

A remake has just been made — with the difference that it is not a film, but real life. In early April, “The Mad Adventures of Rabbi Gilles” came to a close when officials from the French Jewish community forced the nation’s chief rabbi, Gilles Bernheim, to resign from his position. Bernheim, it turned out, was not the rabbi everyone thought he was. Moreover, the context of his fall resembles the events of 1973. Once again, most people are doubled over — not in laughter, but instead in disbelief.

In 2008, when Bernheim became France’s “grand rabbin,” liberal French Jews sighed with relief. Bernheim is Ashkenazi, a significant detail for a community that has grown increasingly Sephardic. Moreover, though Orthodox, Bernheim presented himself as an advocate of a more “open” Judaism. He pushed for greater involvement by women in religious matters, spoke forcefully on behalf of the laique or secular values of the Republic, and dialogued with Muslim and especially Catholic religious leaders — so much so that some conservative Jews dismissed him as “the chief rabbi of the goys.”

Bernheim thus surprised many observers when he veered sharply to the right on the question of the government’s controversial law that would allow same-sex couples to marry and adopt. Throwing himself in front of the media’s klieg lights, Bernheim published a 40-page pamphlet titled What Is Often Left Unsaid” in which the rabbi, who also claimed to possess a doctorate in philosophy, offered a secular critique of the proposed law. The thrust of Bernheim’s argument was that marriage and child rearing were structured by nature and that the effort to change this through laws based on abstract reasoning would have unpredictable consequences.

While Bernheim’s unexpected stance thrilled conservative and largely Sephardic Jews, the rabbi alienated his liberal constituency. Many found his argument less philosophical than religious: One critic, Yeshaya D’alsace, found the pamphlet fueled by “the fear of an ancient and deeply anchored taboo concerning homosexuality.” Liberal French Jews were equally uneasy with the way Bernheim’s essay aligned their community with reactionary forces protesting the law, as well as with Pope Benedict XVI’s glowing citation of the pamphlet in one of his own texts — the sort of blurb few rabbis ever dream of, much less receive.

Remarkably, citations — or the lack thereof — proved to be Bernheim’s undoing. A French academic noticed that long passages in Bernheim’s critically acclaimed 2011 book “Forty Jewish Meditations repeated word for word an earlier book by the eminent philosopher Jean-François Lyotard. At first, Bernheim suggested that Lyotard, who had died in 1998, had in fact plagiarized one of Bernheim’s earlier works. When this claim quickly collapsed, Bernheim instead fobbed off responsibility on a research assistant who had helped him with the manuscript. The Tribune Juive hailed the rabbi’s “courage” and dedication to the truth in acknowledging this mistake.

But the worm was already deep in the apple. The scholar Jean-Noel Danarde who specializes in literary plagiarism, flagged other passages in Bernheim’s book taken from thinkers as diverse as Elie Wiesel, Jean-Marie Domenach (who, ironically, had been accused of anti-Semitism toward the end of his career) and Vladimir Jankelevitch. Moreover, [Danarde ??] revealed that one thing left unsaid in “What Is Often Left Unsaid” was that Bernheim hijacked entire passages from the writings of the reactionary Catholic priest Joseph-Marie Verlinde and Beatrice Bourges, the Pasionaria of the anti-gay movement.

Just as intellectuals began to debate whether the act of plagiarism was, in this case, worse than the sources that were plagiarized, they learned that Bernheim was not what he pretended to be. His credentials as an intellectual were based on the belief, never repudiated by Bernheim, that he was an agrégé, or doctorate, in philosophy. Yet, after reporters began to inquire, the authorities at the Sorbonne declared that Bernheim never finished his degree. From “our son, the doctor,” the French Jewish community now wondered if they should refer to Bernheim as “our son, the charlatan.”

In an interview in early April on Radio Shalom, Bernheim confessed to his misrepresentations, but he also insisted that he would not resign. To do so would be “an act of desertion,” a vow that, eventually, collapsed under the pressure of the Jewish authorities. As for what is more startling in Bernheim’s claim — its sheer chutzpah or his inability to understand that his “desertion” began with his lies — we will leave that to French Jewry to debate.

What isn’t debatable, though, is the awful timing of Bernheim’s fall. There is no good time to steal other people’s words and thoughts, of course, but now is an especially bad time to do so. The political scene in France has grown toxic, thanks in part to a series of corruption scandals on both the right, involving former president Nicolas Sarkozy and the illicit funding of his party, and the left, with the former budget minister Jerome Cahuzac trapped in a series of lies about Swiss bank accounts. President Francois Hollande’s floundering government, contested in the streets by conservative and reactionary movements, has been unable to reverse either the withering of the economy or the burgeoning of unemployment, much less halt the European Union’s politics of austerity.

In a word, rarely has the gulf between a government’s glowing promises and bitter reality been so great; rarely has the public thought so poorly of its governing class. Such a moment calls for moral leaders who stand above politics but also stand for enduring principles. That leader will not be Bernheim. Not long ago, in the Catholic newspaper La Croix, Bernheim lamented how “we no longer understand the notion of moral sense.”