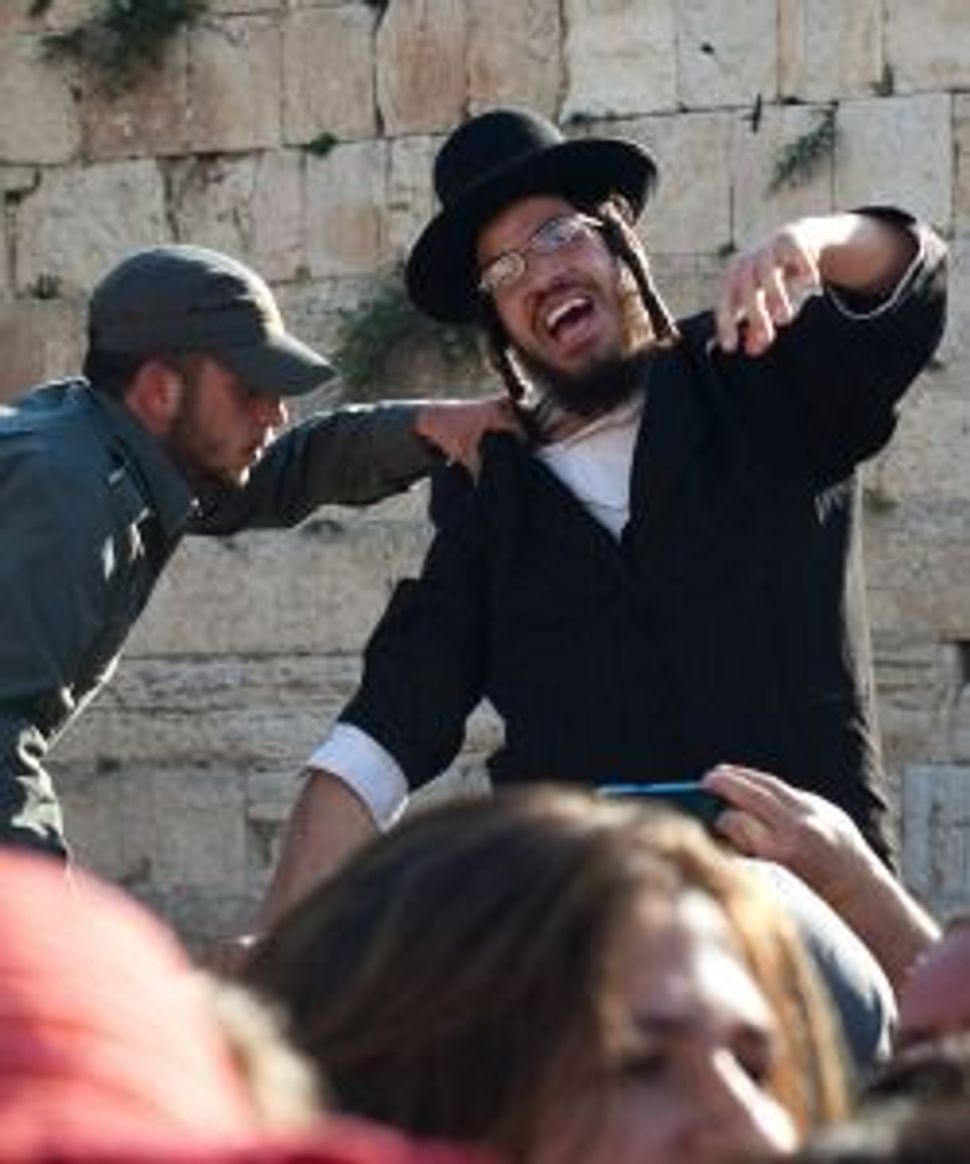 There must have been divine intervention at the Western Wall in Jerusalem on Friday, when no one was killed or injured by the volley of police fire that surely must have been unleashed at the rioters who threw stones at Jewish worshipers that morning. If memory serves, that is what the police do when people throw stones at Jewish worshipers at the Wall.

Come to think of it, I haven’t seen any reporting of the police opening fire on stone-throwers in all the coverage of the violence at the Wall last Friday, when a mob of angry Orthodox Jews let loose with stones, chairs and other projectiles at non-Orthodox women holding their monthly Rosh Hodesh service in the women’s section.

Then again, press coverage of clashes between Israeli police and violent protesters is always spotty and one-sided, as pro-Israel media monitors regularly remind us. So I have no doubt that this was the case here, too.

There has been a great deal of discussion in the Israeli and international Jewish press in recent weeks about the lethal power of stones when thrown in hatred. (Here’s a pretty good sample.)

Prime Minister Netanyahu himself weighed in on the topic in an April 15 speech, declaring that “stones are deadly weapons.”

The furor over stone-throwing erupted after Haaretz writer Amira Hass, who lives in Ramallah and reports on Palestinian affairs, wrote an op-ed essay April 3 describing “throwing stones” as “the birthright and duty of anyone subject to foreign rule,” by which she meant Palestinians.

As the left-wing British daily The Guardian explained on April 6,

Hass’s article appeared during several days of clashes in the West Bank following the death of a Palestinian prisoner whose cancer, according to Palestinian leaders, was diagnosed late and treated only with painkillers; and the shooting dead of two Palestinian teenagers by Israeli soldiers after they allegedly threw firebombs at a checkpoint. It was published the day after a military court convicted a Palestinian man of the murder of Asher Palmer and his baby son, Jonathan, whose car crashed after being struck with stones in 2011. Another Israeli child, three-year-old Adele Bitton, was critically injured in a similar incident last month.

Conservative New York publicist Ronn Torossian, writing in FrontPageMag April 9, lamented that there was a “perpetual double-standard” when it comes to stone-throwing at Israelis. He declared unequivocally that “stone throwers are violent terrorists.” He concluded:

Worldwide, stoning is dangerous and human-rights organizations denounce stone-throwing. They should do precisely the same when stones are directed at Jews in Israel.