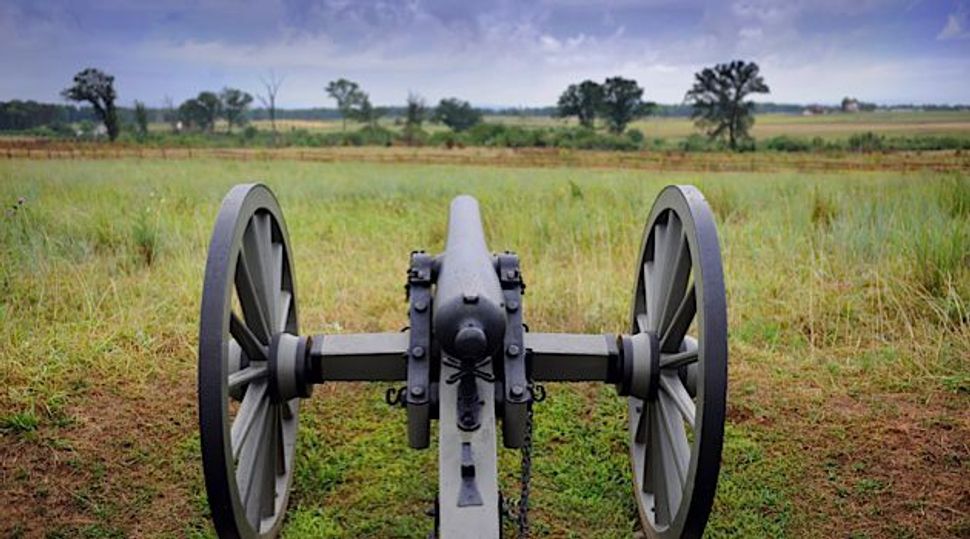 On Cemetery Ridge: This cannon rests at Gettysburg National Military Park, where the battle that raged from July 1-3, 1863, was the bloodiest of the Civil War, turning the tide of victory from South to North. Image by Getty Images

A few years ago, I delivered a lecture at Bowdoin College in Maine. Arriving early, I was promptly led to the college’s archive, where a permanent exhibit memorializes the heroism of a former president, Joshua L. Chamberlain.

While on leave of absence from Bowdoin during the Civil War, then-professor Chamberlain led his Maine soldiers, who were out of ammunition, in a desperate charge with fixed bayonets during the Battle of Gettysburg. His success preserved in northern hands a strategic hill known as Little Round Top and helped to turn the tide of battle in favor of the Union.

Ever since, Chamberlain has been one of Bowdoin’s favorite sons. His house opposite the campus stands as a museum. A digital archive on the campus’s website celebrates his legacy.

“Something about Chamberlain has become very much a part of Bowdoin,” the archive instructs students. It encourages them to internalize those values that earned him his medal of honor.

Like that college community, American Jews used to celebrate their laureled heroes of the Battle of Gettysburg. Northerners boasted of Lieutenant Colonel Edward S. Salomon, who, according to his superior, “displayed the highest order of coolness and determination under very trying circumstances.” Salomon commanded the 82nd Illinois Regiment, Company C, once famous as the “Jewish Company” in the Civil War. Chicago’s Jews raised $11,000 in recruiting bonuses for those who signed up to fight in the company’s ranks, and a high proportion of its soldiers were Jewish.

According to one heroic Northern account of the Battle of Gettysburg, “Colonel Salomon with the 82nd, made a charge upon the pits in his front, driving the Confederates back… During the three days’ fighting, Colonel Salomon had two horses shot under him while leading his regiment.” Some 131 members of the soldiers under his command were killed, wounded or captured during the battle.

Another Jewish member of the 82nd Regiment, Joseph Greenhut, likewise participated in the battle on the Union side, and lived to deliver the dedicatory address when a monument to his regiment was dedicated at Gettysburg in 1891. “It was a fearful struggle against great odds,” he recalled, and expressed surprise that “we were not entirely annihilated.”

Depicting a scene from “Pickett’s Charge” — the suicidal assault that Confederate General George Pickett led against Union positions on Cemetery Ridge in Gettysburg — Greenhut described “the fields which were so thickly strewn with dead and dying that in some places it was impossible to walk without stepping on some of the dead bodies.”

Confederate Jews, of course, recalled the Battle of Gettysburg differently, focusing on the nobility of the defeated soldiers. Adolph Proskauer, an Alabama Jew who rose to become a major in the Confederate army and who led a company of troops at Gettysburg, was described as “the personification of intrepid gallantry and imperturbable courage.”

Raphael J. Moses, the Chief Commissary Officer of the First Corps (described by one observer as “the most jovial, amusing and clever son of Israel I ever had the good fortune to meet”) praised Pickett’s charge — which led to more than 6,500 Confederate casualties — for its “valor.”

To Jews of the time, the fact that they had fought and died on both sides of the bloody battlefield of Gettysburg demonstrated beyond a shadow of a doubt their patriotism, honor and manhood. Illinois Congressman John Wentworth, who also served as mayor of Chicago, stressed precisely those values when he welcomed the survivors of the Jewish Company back to Chicago after the war ended. “When native-born Americans proved false to their allegiance to their flag… you ‘foreigners’ came forward and showed yourselves true men,” he gushed. Knowing how sensitive Jews were to charges of dual loyalty, he reassured them that “you have done honor to your native and to your adopted countries.”

Today, the values of patriotism, honor and manhood scarcely resonate with American Jews. The Jewish heroes of the Battle of Gettysburg have all been forgotten. No institution commemorates their legacy the way Bowdoin College does that of Joshua L. Chamberlain.

The fact that Jews fought and died at the Battle of Gettysburg might nevertheless give us pause as we commemorate its 150th anniversary. For had Salomon, Greenhut and so many others not held their ground during the battle, the Confederate forces that penetrated into Union territory in Pennsylvania would have threatened Philadelphia, Baltimore and Washington, D.C. The South might well have won its independence.

The great question of the time, as Abraham Lincoln observed in his Gettysburg Address, was whether “a new nation, conceived in Liberty, and dedicated to the proposition that all men are created equal” could “long endure.” The Battle of Gettysburg, which engaged soldiers of every kind — including Jews — helped to ensure that it did.