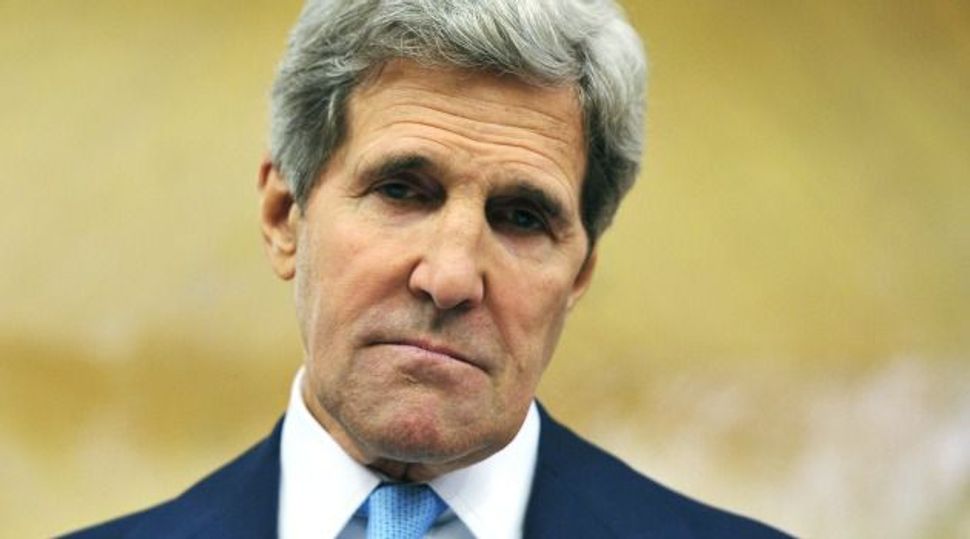 To what can John Kerry’s efforts to restart the Israeli-Palestinian “peace process” be likened? Perhaps to those of a mechanic doggedly working on the engine of an old jalopy whose body is eaten by rust: Even if he gets the damned thing running, it won’t go anywhere.

When something has gone nowhere for 20 years (and that, minus two months, is how long it’s been since Yitzhak Rabin and Yasser Arafat shook hands on the White House lawn), there are two possible conclusions. One is: a little more tinkering, a little more elbow grease, another squeeze of the oil can and — whoosh! — off we go at last. The other is, it’s time to look for a different car.

The Oslo process was built on a central paradigm. One might call it the French-Algerian one, although the names of other countries could be substituted. According to this model, Country A (in this case, Israel) was a foreign power that was colonizing the land of Country B (in this case, Palestine).

What was needed was decolonization. Country A would withdraw its armed forces, governmental apparatus and colonists from Country B, Country B would drop its many grievances against Country A, and the two disengaged states would live independently and apart forever after.

Unfortunately, the Israelis were not the French and the Palestinians were not the Algerians. France and Algeria were, both geographically and in the minds of most of their inhabitants, two different countries. One ended here and the other started there, and although disentangling them was not easy, it was doable.

But “Israel” and “Palestine” (a pair of confusing words that sometimes denote all the territory of the 1918–1948 British Mandate and sometimes just a part of it) are not different countries at all. Geographically, they are a single unit, enclosed by the Mediterranean to the west, the Jordan River to the east, the Sinai desert to the south and the mountains of Lebanon to the north.

Psychologically — for Jewish tradition, for a majority of Israelis and for nearly all Palestinians — they are also one land. Economically they form an integrated area in which Palestinians, while often exploited, use the shekel and depend on Israel for their livelihoods. And demographically everything is mixed together, too. Twenty percent of the population of pre-1967 Israel is Palestinian. Israeli Jews now constitute about the same percentage of the population of the West Bank.

The deep, structural reason that Oslo hasn’t worked is not that intransigent forces haven’t allowed it to, it’s that it was predicated on tearing apart a country that refuses to come apart. Yes, it’s a country in which one people unjustly rules another. It has no shared set of institutions. It doesn’t have international recognition. It doesn’t even have a name that anyone can agree on. But it exists.

Does recognizing this mean calling for a so-called “one-state solution”? God forbid. A single state with a single government for all Israelis and Palestinians would be a disaster from the first moment. It would sooner or later — and most likely sooner — unravel in a vicious civil war. We have seen such ethno-religious conflicts in recent years. In Bosnia. In Sri Lanka. In Iraq. We don’t need another and worse one.

What is called for is a two-state solution — but two states in one country. Two governments for two peoples, a part of each living under the jurisdiction of (although not necessarily with the citizenship of) the other; a set of mutual contractual obligations that ensure close and permanent collaboration; a common security policy; free trade; open borders; open travel; no more roadblocks and checkpoints; an end to walls and fences. In short: an Israeli-Palestinian federation.

It can’t be done? But there are precedents, some of which have worked better than others. One that has worked particularly well, despite all its difficulties, is the European Union. Who would have believed in 1945 that France and Germany would one day be living together in a federated Europe without policed frontiers, without customs posts, without enmity?

Israelis and Palestinians are not French and Germans, just as they are not French and Algerians. They have their own specific problems that are unlike anyone else’s. But they won’t solve these by attempting to go back to a time when it was perhaps still possible to draw a strict line of separation. That’s what John Kerry is the 1,000th diplomat to try doing, and he’ll be the 1,000th to fail. When you can’t go backward, you have to go forward, even if it’s to a place you find hard to imagine. But first we need to change cars.