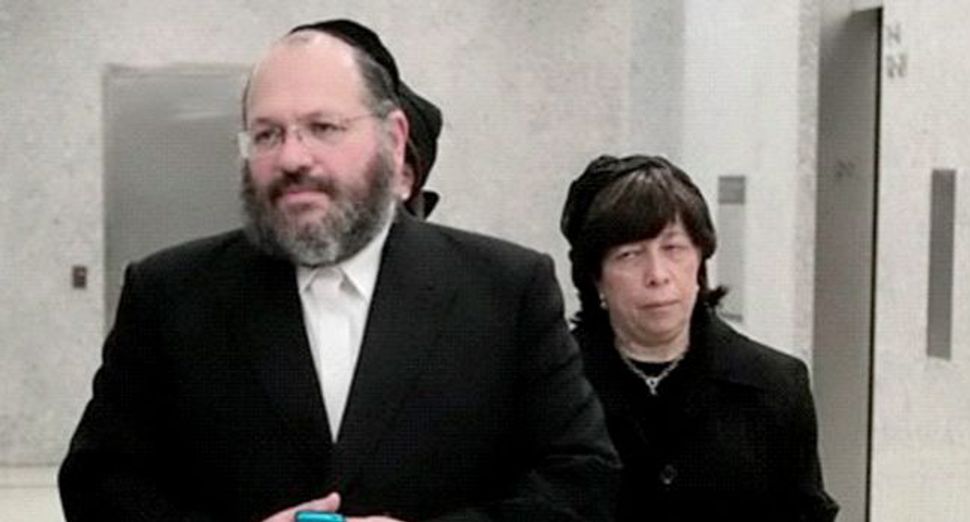 Day in Court: Chaya Weberman follows her husband into the courtroom during his trial in Brooklyn last year. Image by Flickr

When Nechemya Weberman was found guilty and was sentenced to 103 years in prison for repeatedly raping a girl who he was supposed to be counseling, most thought the grisly tale was over. This was a record sentence for a Hasidic man convicted in a Brooklyn courtroom. The counselor had fallen, and his cloistered Satmar community — a shtetl in the shadow of the world’s hipster capital, Williamsburg Brooklyn — had cracked open, revealing secrets.

The victim, a minor whose identity is protected by the court, made headlines for withstanding four days of brutal testimony. Both Weberman’s defense and the prosecution later agreed that she was the best witness they had ever seen. Press coverage praised her courage and resolve in combating not just her abuser, but also her own community, which, rather than supporting her, united to raise funds for Weberman’s legal fees.

Even Rebbe Aaron Teitelbaum, the dynastic community leader, outrageously asked, “Is our sister to be like a whore?” The tale seemed well cast and clear cut: heroine, villain, justice.

Covering the case for Newsweek and The Daily Beast, I saw Nechemya Weberman’s wife, Chaya Weberman, in court every day. It became clear that this was a story of not one woman, but two: the traditional heroine — the victim, now a young and beautiful newlywed — and the wife who stood beside her husband as shame cloaked all he touched. I wanted to know that woman.

In court, where the seating was gender segregated like at a religious wedding, the victim’s supporters wore expensive wigs and big jewels, announcing an Orthodoxy that was more modern, while Weberman’s small female faction dressed in funeral black with Old World hats attached to somber wigs. They didn’t smile. Who could blame them?

My eyes met Chaya Weberman’s while waiting for our bags to be searched by court police. Each day she sat beside her husband in the gallery before proceedings began. She was often with a daughter, or with her husband’s sister, women who stared coldly and wouldn’t return hellos. Looking calm and grim, Chaya Weberman nodded in recognition.

After Nechemya Weberman had been shipped to prison in upstate New York, I called his wife again and again, learning more about her and her husband and their 10 children each time, asking repeatedly when we could meet.

She told me that she and her husband had first met, like most Satmar couples, under the gaze of their parents. She liked him from the start, thought him kind and imagined they could make a life together. I told her I remembered first meeting the man who would become my husband, the first Jew I’d ever dated, and thinking the same thing.

The day of their wedding, she fasted and prayed that she and her husband would be compatible and have healthy children. Not long afterward, he became a driver for Rebbe Moses Teitelbaum, worked in information technology, founded a counseling business supporting their large family in one of the country’s costliest cities and at the same time became entangled in legal troubles concerning his real estate ventures. She said that he was still never too busy to take her shopping or to visit family, as Satmar women aren’t permitted to drive.

It soon became clear that if I wanted to meet Chaya Weberman in person, I’d simply have to show up at her door. It wasn’t the first time I’d gone to Satmar Williamsburg in an ankle-length skirt, thick tights and a sweater that hid my elbows and collarbone. Though the clothes were mine, I felt disguised, but still I expected she might not see me.

When I knocked, she was surprised, but she let me in. Passover was weeks away, but a vacuum hummed nearby, sucking up hametz. She wore a navy silk dress and a terry-cloth headcovering dotted in rhinestones. Her home was large by New York City standards, with a vaulted ceiling and a massive dining table for family meals. Chaya Weberman had recently returned from one of her biweekly visits to her husband. She had brought him a Megillah for Purim, which she proudly said he read aloud to 20 inmates. I asked if he had made friends, or enemies. She said he’s made neither: He prefers to read; books are his friends, and he doesn’t like to go outside.

Despite all the evidence — the victim’s vivid account, the confessions of other alleged victims in Williamsburg and in the press, and the rumors attacking Weberman’s character, claiming that he had long had a problem with girls — she won’t accept her husband’s guilt. After more than 30 years of marriage, she still believes he is a loving person who could never hate or do wrong. She mistrusts the legal system, and her friends and neighbors reinforce her belief in her husband’s innocence.

It’s easy to wonder how a woman could stand by a man incarcerated for such ghastly offences. Part of her strategy is demonizing the victim and her family; she even calls them “sluts.” It’s part of the narrative she must craft to get through the day. In her mid-50s, she still has children at home to raise and marry off. No easy feat beneath the burden of her husband’s crimes.

She maintains that he has been chosen to be tested by God, even though he did nothing wrong. She won’t ask why. She says doing so would require her to meet Hashem for an answer, and she’s not yet ready to leave this life. She is brimming with faith.

Life is harder without the head of her house, but she smiles when discussing his fan club: people who write to her to champion Nechemya’s innocence, and who are not all Satmar Jews. One woman, for instance, who was searching for a Weber grill came across the trial coverage and offered her support.

Though Weberman’s sentence was reduced, he’ll still likely die in prison. But his wife refuses to focus on that; rather, she repeats that he is “working on his soul,” pursing the gifts of the next life. She surrounds herself with family and friends who support this thesis. She is lonely, but she reassures me that she’ll survive.

Sometimes the only truth you can know is your own.

Allison Yarrow is a journalist in Brooklyn, a contributing writer at Time and the author of “The Devil of Williamsburg,” an Amazon Kindle Single, is now available.