Not Turning a Blind Eye 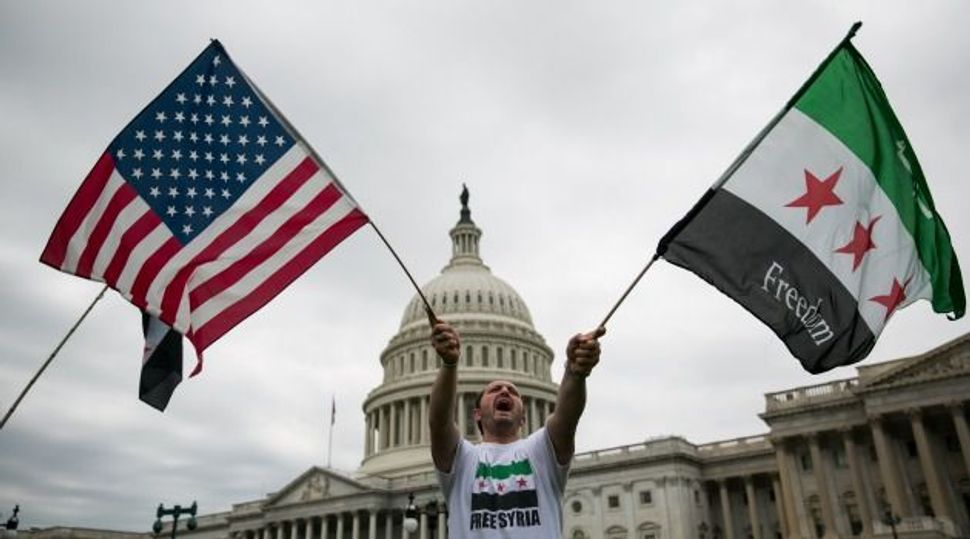 Rare Concensus: Support for President Obama?s plan for a strike on Syria has brought together unlikely allies in the Jewish communal world. Image by Getty Images

There is one point of agreement in the otherwise fractious and dispiriting public debate on how, if at all, to respond to the Syrian government’s use of chemical weapons against its own people: America is in an isolationist mood. With each new poll comes mounting evidence that Americans oppose military strikes against Syria and, more broadly, consider the enflamed Middle East as the persona non grata of the global cocktail party — the unpredictable, potentially violent guest to be avoided at all costs.

The reasons for this inward turn are obvious, at least superficially. A disastrous war in Iraq and uncertain outcome in Afghanistan have soured Americans on foreign intervention, while an economy that still seems to be dragging its feet toward recovery demands more attention back home. Plus, let’s be honest here — ours is a nation with a stubborn streak of ignorance when it comes to world affairs. A Pew Research Center study in February reported that only about 50% of Americans could correctly identify Syria on a map of the Middle East.

American Jewish leaders form an unusually strong counter to this isolationist narrative, and for this we should be grateful. Support for President Obama’s plan to respond militarily to Syria’s use of chemical weapons has brought together groups normally at great odds with each other. The Republican Jewish Coalition and the National Jewish Democratic Council — when is the last time those two agreed? Meanstream heavy hitters like the American Israel Public Affairs Committee, the American Jewish Committee, the Anti-Defamation League and the World Jewish Congress; umbrella groups like the Jewish Council for Public Affairs, and even more progressive outfits like the Israel Policy Forum — all lined up behind the president. (As did the Forward.)

A petition signed by rabbinic leaders across the denominational spectrum called on Congress to support military strikes and labeled the chemical weapons attack “a serious crime against humanity.”

The outliers: J Street, which has remained conspicuously silent, and the Zionist Organization of America, which is cantakerously noncommittal. As such, both groups have effectively removed themselves from the communal debate.

Why the relative unanimity on the organizational level? Surely the Holocaust experience haunts every gruesome image of victims of the poisonous gas that killed 1,400 outside Damascus on August 21. It’s not just the echo of gas chambers and the indiscriminate mass murder of innocents, it’s the stubborn belief that the world should be moving away from that kind of depravity — was moving away from it, in fact, until Assad spit on international convention to gas his own people.

Concern about Israel is laced through these arguments. If Assad can escape any punishment for using a weapon of mass destruction, why wouldn’t Iranian leaders or other bad actors in the region think the same? But concern about Israel makes a further impression on the American Jewish perspective. It prompts Jews here to develop a broader worldview, a reason to understand — or seek to understand — a place far beyond our immediate shores.

This perspective can come dangerously close to the “internationalist” moniker too often used as an epithet against Jews, the insinuation that we somehow have enough secret power to get nations to do our bidding, that our loyalties lie elsewhere and therefore are suspect. Those kind of spurious charges are already thrumming just below the surface in this current Syria debate, prompting the legitimate fear that if it all goes wrong, somehow Israel will be blamed.

But that corrupts the legacy we ought to embrace: That we are part of an international people whose distinct history and diasporic experiences force us to be aware of a larger global landscape. Being attuned to suffering and oppression is part of our collective DNA, and it should shape our views on foreign policy — not to intervene stupidly, arrogantly or uselessly, but certainly not to shirk away from responsibility and leadership. Let’s not forget that the man who drafted the United Nations’ Genocide Convention, Raphael Lemkin, was a Polish Jew who lost almost 50 members of his family in the Holocaust.

As President Obama said when he addressed the nation September 10, America cannot be the world’s policeman. “But when, with modest effort and risk, we can stop children from being gassed to death, and thereby make our own children safer over the long run, I believe we should act.”

That kind of measured global activism depends on an underlying belief that government generally acts for the good. It’s a belief that American Jews express time and again, in research polls and in election polling, reflecting a communitarian instinct that fits with the emphasis on community in Jewish religion and culture, and seems at odd with the growing isolationism and individualism in America today.

As Bill Keller wrote in a recent New York Times column: “Isolationism is not just an aversion to war, which is an altogether healthy instinct. It is a broader reluctance to engage, to assert responsibility, to commit.”

Plenty of Jews subscribe to the overall need to engage in the world, and still oppose Obama’s threat of military strikes. As our Nathan Guttman writes in this week’s Forward, a member of Congress who vividly illustrates the isolationist mood on Capitol Hill is a progressive Jewish Democrat from Florida.

Still, the Syria imbriglio is but one chapter in America’s recalibrating relationship with the world, reflecting an inward turn and isolationism that does an injustice to our highest ideals and standards. As the rabbis who signed the petition to Congress noted: “We have learned from our own history that inaction and silence are the greatest enablers of human atrocity.”

Not Turning a Blind Eye