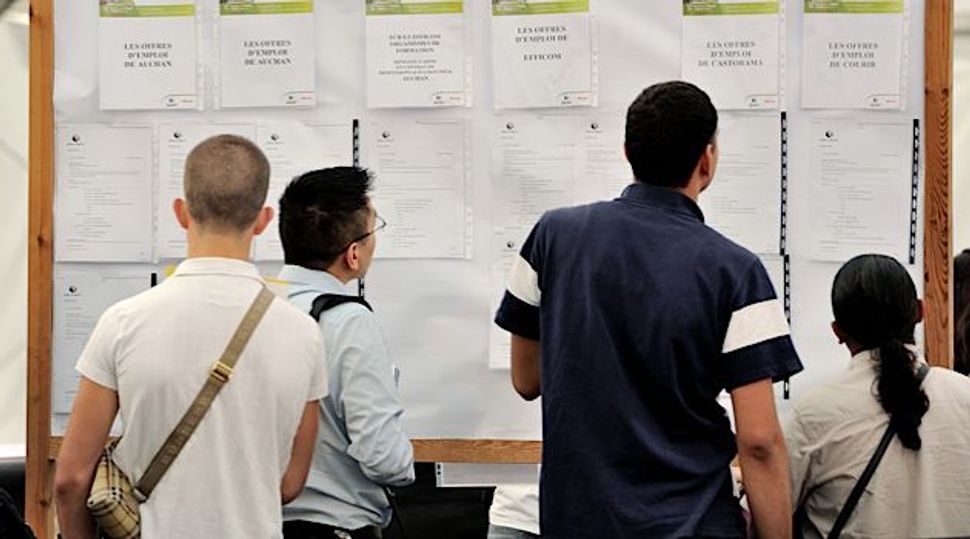 Looking: Are there less people looking because the boomers are returning or because the jobs have dried up? Image by Getty images

You may have noticed, if you follow this sort of thing, that unemployment declined in August. The jobless rate was 7.3%, according to the monthly report from the federal Bureau of Labor Statistics. That’s down from 7.4% in July. For context, it peaked at 10% in October 2009, at the height of the financial meltdown, and has been declining steadily ever since. Sounds good, no?

Well, maybe not. Most of the decline isn’t because unemployed people found jobs, but because they stopped looking. The percentage of Americans over 16 who are working or job-hunting — participating in the workforce, in wonk-speak — declined in August to 63.2%. That’s the lowest in 35 years. It had been running consistently above 66% for two decades until the crisis hit in 2007. Fully 312,000 people dropped out in July and August alone, nearly equal to the number of new jobs created.

What the jobs report doesn’t tell us is why fewer adults are working, or trying to. The answer will tell us whether the numbers show an increase in overall misery or a decline.

There are two main theories. One says the dropouts reflect an aging population as baby boomers reach retirement age. The other says there aren’t enough jobs to go around, and able-bodied, working-age adults are giving up searching.

Most pundits quoted in the media since the report appeared September 6 lean toward baby boom retirement. Curiously, nobody seems to have any numbers to back this up. They seem to feel it’s obvious, since we all know the first boomers are turning 65. Actually, the first wave of boomers is just getting there, so it’s too soon to show up in the statistics. But, hey, if you’re a pundit with a Ph.D. and tenure, you don’t need evidence. You just say stuff.

It so happens, though, that there are ample numbers addressing the question. An accumulating body of evidence shows that Americans are working past retirement age in growing numbers, mostly because they can’t afford to retire. More than half of all working Americans have no retirement plan outside Social Security. And most of those with plans don’t have nearly enough saved.

Some numbers: In 2012, Census Bureau figures show, only 46% of employees were enrolled in any kind of workplace retirement plan. Of those with a plan, about one in five (roughly 10% of all workers) had a traditional defined-benefit pension. The rest had a 401(k)-type defined-contribution plan, where you do your own saving. More than three-fourths of plan participants over 50 have less than $50,000 in their accounts. Retirement advisers recommend having anywhere from four to 12 times your annual salary saved by retirement. Fewer than 1% have that. An April report in Forbes magazine called the entire 401(k) system an “experiment that failed.” No surprise, then, that growing numbers of people who reach retirement age and still have a job aren’t retiring. In fact, that post-2007 decline in workforce participation has occurred entirely among working-age people. Participation among people age 65 and older is dramatically higher.

The contrast is so extreme that if you drew a graph showing the change in workforce participation by age group in the six years between August 2007 and August 2013, you’d end up with a rather elegant S-shape. At one extreme, participation declined 34% among those aged 16 to 17. Rates curve upward until the 50-to-54 age group, whose participation declined only 5%. The line is flat among 60- to 64-year-olds, then rockets upward. Participation is up 10% among persons aged 65 to 69, and 18% among women aged 70 to 74.

I’ve thrown links to all these statistics and more onto my Forward blog, along with some nifty video discussing the implications.

The short answer, then, is that the people who are quitting the workforce aren’t retirees. They’re people of prime working age, dropping out because they can’t find jobs.

Startlingly, the economy is growing. GDP grew during the second quarter of 2013 at an annualized 2.5%, and we’re on target to top 3% for 2014. Corporate profits are even sunnier: They grew an annualized 3.9% during that second quarter, and should top 10% in the fourth quarter. For 2013 overall, profits should show 6% growth. Classic economic theory says that rising profits mean more jobs. Why isn’t that happening?

Again, theories abound, but the main culprit seems to be technology. Two scientists at MIT, Erik Brynjolfsson and Andrew McAfee, have been getting a lot of media attention with their 2012 book, “Race Against The Machine,” which details the ways in which advances in computerization are allowing machines to replace people at one task after another, lowering the cost of doing business while leaving less and less for employees to do. They’ve described their findings in TED talks, a “60 Minutes” segment and countless newspaper articles.

Machines have replaced humans at many medium-skill jobs that used to provide decent middle-class incomes, like factory work, retail sales and secretarial work. They’re a big reason the economy has hollowed out, leaving more people at either menial, personal-service jobs or high-end management and creative work. And they’re creeping outward in both directions as computers learn to write reports, fill warehouse orders and even drive cars.

McAfee told NPR in 2012 that as people are “freed up to do other things,” he’s confident that “what we’re going to do is reduce poverty and drudgery and misery around the world.” The funny thing is, that’s almost exactly what National Geographic predicted in a celebrated 1982 cover story on the coming microchip revolution. But it didn’t happen. The 30 years since then have seen a precipitous rise in inequality.

In reality, as computers have reduced the number of people required to produce the goods and services we need, they’ve allowed a shrinking number of people to keep a growing share of income for themselves, leaving the rest increasingly insecure.

We’re entering an era in which we know how to produce enough to feed, clothe and house everyone more easily than ever before in history, but we don’t know how to get things to the people who need them. Production is increasingly disconnected from work, but distribution is still tied to work. There’s plenty to eat, but you have to work to eat and there aren’t enough jobs . Neoliberal wonks like Thomas Friedman write that in this new world, people must think fast and reinvent themselves to stay on top. But not everyone is that clever. Have we returned to the days when the ordinary were condemned to poverty?

To tame our machines requires rethinking the way goods and services are distributed. We might divide up jobs, giving everyone a 30-hour work week and ensuring that every job pays enough to live decently. Or, more fancifully, create some sort of guaranteed income system, where those with talent and ambition can soar, but nobody is condemned to hunger.

But either of those would require a political decision, and there’s no sign of that happening.