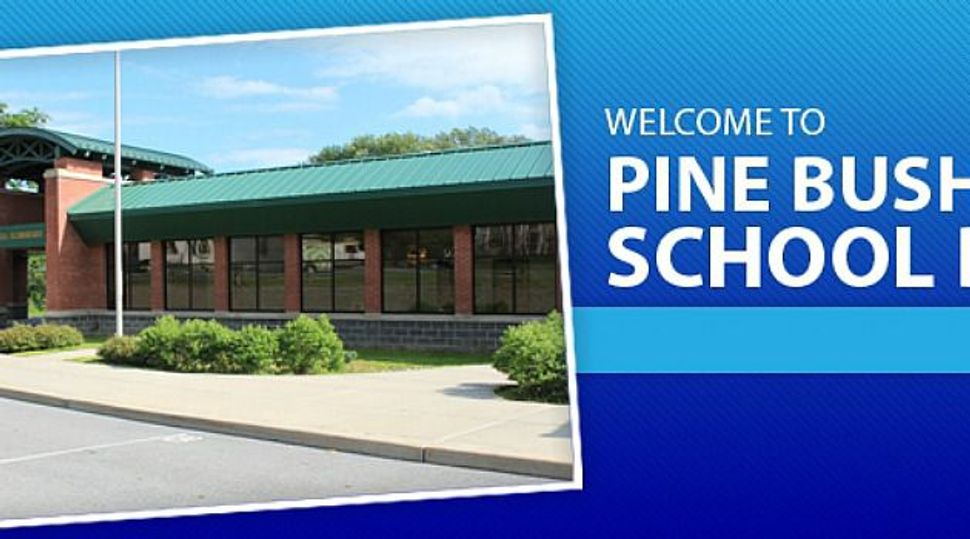 Chalk it up to being a journalist myself, but it’s usually easy for me to discern the moment in a story when a reporter knows he or she has hit pay dirt — when they can already visualize their byline on the front page. For Benjamin Weiser, a New York Times reporter investigating allegations of anti-Semitism in an upstate New York school district, it came — I’m sure of it — when the school’s superintendent, a Jew himself, described the lawsuit by a group of parents against the school as a “money grab.”

A Jew using an anti-Semitic trope to describe another set of Jews? That’s when the bell goes off. Sure the reported swastikas everywhere are a good detail and the town is only a 90 minute drive from New York City — all of which elevates this local story to national news — but what made it pop was that element that makes any good piece of newspaper journalism resonate: conflict.

This is not to discount the horrible atmosphere it appears has taken over the Pine Bush Central School District (chronicled in the Times article that did indeed make the front page on November 7). Kids suffering daily slurs and pennies thrown at them, crude jokes about the Holocaust, and those swastikas, etched and drawn everywhere.

But what are the implications when a newspaper, for its own reasons, focuses on a story that is not representative of any bigger trend, but can be construed as pointing to one? Amplifying the unusual, the outlier, the counterintuitive conflict is in the DNA of journalism (that man bites dog thing). This seems to be a case study in what happens when that predilection combined with a carelessly framed story can make an audience draw unwarranted conclusions.

And draw conclusions people did, including that this town’s troubles proved anti-Semitism was alive and well in America. There was this Tweet from Daniel Gordis, the prominent American born-Israeli writer, referring to the recent Pew survey that found American Jews rapidly assimilating: “Just as Pew suggests Jews feel totally welcome: Pine Bush, N.Y., School District defends Anti-Semitism.” Much more followed in this vein. One commenter on the Times website took the longest view: “Clearly this is the result of almost 2000 years of church sponsored and encouraged hatred and violence toward Jews.”

Two questions jumped to mind while reading this article: First, how generalizable is the experience of Pine Bush? And, second, if what is happening in this town is indeed unique and peculiar and the reason why the Times felt it merited a 3,000-word story and placement on the front page, has the reporter made it absolutely clear why anti-Semitism has flourished there specifically?

The first question is pretty easy to answer. The Anti-Defamation League keeps the most vigilant tallies on anti-Semitic incidents in the United States. It is, so to speak, the group’s bread and butter. And this summer, the ADL’s annual report showed that in 2012 there was a 14% decline in the number of anti-Semitic incidents, continuing a three-year downward trend. To quantify it further, they counted 927 incidents in 2012, which included 17 physical assaults on Jewish individuals, 470 cases of harassment and threats, and 440 cases of vandalism.

The 3,500-page deposition in the federal case against the Pine Bush school district contains the names of 35 students accused of engaging in dozens of acts that would fall in the categories of harassment and vandalism. This means that this small rural school district has a disproportionate number of the total anti-Semitic incidents in the country.

So what’s going on in this town? All we learn from the story is that in the 1970s a Ku Klux Klan grand dragon lived in Pine Bush, though this is quickly undercut by the ADL’s report that Klan activity in the region has been nonexistent for years. This is followed up with the reporter’s own anecdotal evidence: being yelled at by a mechanic in a pick up truck who opined that Jews don’t know how to drive and, “we don’t want them in our town.” That’s it by way of explanation.

What the article could use is a bit of sociology. Who are the families of these children that are learning to expertly draw swastikas or recount Holocaust jokes that sound passed down from a grandfather? When did Jews begin to settle in Pine Bush and has there been any conflict reported in the past? What kind of class issues are also at work in the town — do Jews represent an upper middle class whose children are sharing classrooms with the children of poor whites? If the Klan is really dead, are there other outlets for white power culture and do they exist in Pine Bush?

The questions could go on. I’m not expecting an academic survey of the region, but in lieu of any real explanations for this strange behavior, we are just presented with the story of an oddity. What ends up taking up much more of the reporter’s attention is the Jewish superintendent who keeps shoving his foot in his mouth, telling parents that “If you want your kids to hang out with more Jewish children or have more tolerance, why would you pick a community like Pine Bush?”

It’s a tired complaint to say a news article lacks context, but that’s what I want to say here. And without a bigger back story or some deeper investigation as to the source of this bubbling hate, all we have is an article that does one of two things: It either feeds an unwarranted hysteria about creeping anti-Semitism or just provides a titillating read about the strange doings upstate for the Upper West Siders who make up the Times core audience. What it does not do, and doesn’t seem concerned with doing, is get us any closer to understanding why those kids have found themselves in such a terrifying environment.

Gal Beckerman is the Forward’s opinion editor and writes a monthly column about the media. Contact him at [email protected] or on Twitter @galbeckerman