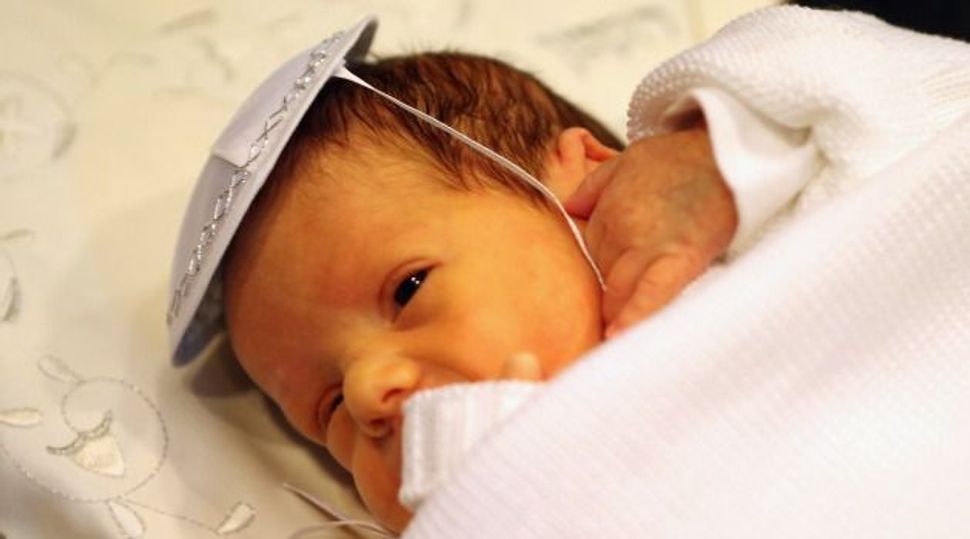 (JTA) — Natan Zaidenweber thought the mohel was kidding. His wife, Linda Raab, thought it was some kind of religious formality and didn’t give it a second thought.

But the mohel, Cantor Philip Sherman, was serious. Though most fathers demur when he invites them to perform the bris on their sons by clipping their foreskin, preferring to delegate the task to someone professionally trained in the procedure, Sherman finds that about 5 or 10 percent of dads agree to do the cut.

“It is the father’s mitzvah to actually perform the bris as Abraham did for his son, Isaac,” Sherman said. “Many fathers have told me what an incredible moment it was for them to do the actual bris and enter their sons into the covenant of Abraham.”

The Mill Valley, Calif., couple realized the cantor wasn’t joking only once the ceremony was underway. Sherman began with a naming ceremony for Jay Hilay and his twin sister, Sivan Rose. Then he again offered Natan the option of making the cut.

The new dad stepped forward, and as his startled wife screamed his name in a tone that she says was intended to say, “Are you crazy?,” a friend reassured her it would be easy.

“I then took a deep breath, surrendered to the faith I had in Phil and motioned that they had my blessing to proceed,” Raab said.

Sherman set up what was needed, gave the baby some sugar water, put a clamp in place and offered Zaidenweber some direction. Making the cut, Zaidenweber said, was a powerful bonding experience.

“I’m glad I did,” he said. “I’m glad I have that connection with my son. Your love is equal for both [twins], but it’s special that we have that bond.”

For Raab, too, the experience was a positive one. Sherman had told the gathering that a baby’s cry during a bris is like the sound of the shofar opening the gates of heaven.

“I closed my eyes, heard Jay’s cry and actually was able to experience it as deeply spiritual and beautiful,” Raab said, noting her pride that her husband took on the role.

“He stepped up, fearlessly, with a faith in himself that I wouldn’t have had in myself,” she said. “I have since been aware of how much his modeling has helped me to muster more courage as I face the tasks of mothering.”

If the couple were to have another son, would Zaidenweber make the snip again? Yes, say mom and dad, without hesitation.