Finding a New Room in the Jewish House 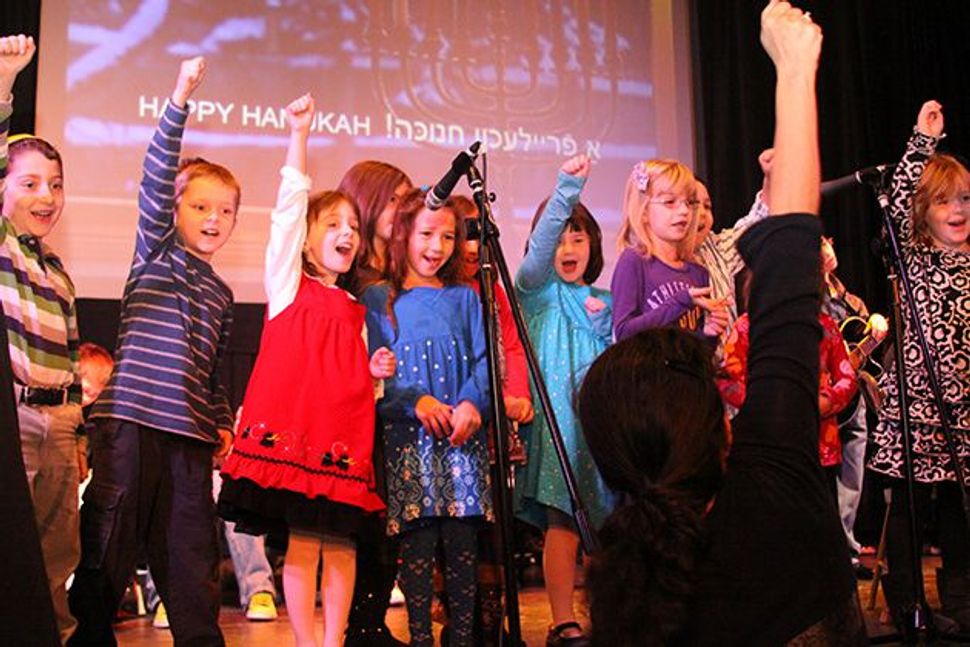 Young Yiddishists: Children perform at an annual Hanukkah celebration at a Long Island shule of the Workmen?s Circle. Image by Shulamit Seidler-Feller

My original thought had been to follow up my column on the year now ending by writing about the year that will soon begin. But twist and turn as I did, I found that I had very little to say about the 12 months ahead. Robert Frost’s last poem comes to mind: “The prophets really prophesy as mystics; the commentators merely by statistics.”

But I am neither a prophet nor the son of a prophet. Nor, in the year of the Pew survey of American Jews, am I so dismissive of statistics. In fact, I found much that was encouraging in the Pew survey — especially the emergence of a cohort of Jews who feel Jewish, who are proud to be Jewish, but who reject the notion that that makes them “Jews by religion.”

The problem, of course, is that we have denominationalized Judaism. If you’re not Orthodox, Conservative, Reform or Reconstructionist, you don’t fit. There’s no ready category for Jews by intention, by culture, by simple (or complex) desire who are uncomfortable with the denominational categories. And because they don’t fit, many of them wander away.

That is why Yossi Beilin and, more recently, Steven M. Cohen and Kerry Olitzky have proposed the creation of a category that would include Jews by culture.

Now, “Jews by culture” can be a sloppy category since culture itself is more vagueish that voguish. But there are examples of folks who have managed to add behavioral bones to the flesh of culture.

I think, in this connection, of the Workmen’s Circle, a valiant effort to use a distinguished past to lay claim to a meaningful future. Here in Boston few Jewish organizations have a more crowded schedule than the Workmen’s Circle. And few sponsor a plethora of events that are as well attended. The active pursuit of social justice is at or near the top of the Workmen’s Circle agenda, as is fostering the Yiddish language. And the old-fashioned and often angry rejection of religion per se, the emphasis on Judaism rather than on Yiddishkeit (go ahead, try to translate that one) is by now an irrelevant bore.

Yes, the Workmen’s Circle is proudly on the Left of our community. That is its tradition, that is its way. In so positioning itself, it offers a home to people who see the pursuit of justice through a Jewish lens, who reject the barren notion that there is a gulf between social justice and Yiddishkeit.

Here, my own take on the Revelation is apposite. According to our tradition, all Jews — the living, the dead, the as yet unborn, were present at the Revelation at Sinai. Now, I do not believe there was, in fact, a revelation at Sinai. At the same time, I do believe I was there, which is to say I will myself into membership in this community. I may — I do — lack the faith, but I accept the fate.

Is that a secular Jew’s manifesto? I think not. I am, by conviction, a secular Jew, but I am a secular Jew who acknowledges that religion is the language of the Jews, available to any literate Jew. I don’t fetishize secularism. That is why I vastly prefer to term “cultural Jew.” No one can dispute the idea that religion is a major element of Jewish culture, But note: The over-arching category is “culture.” Religion in a component of culture, not the other way around. And that is why the search for a behavioral expression of culture — more precisely, behavioral expressions of culture — deserves attention and support.

Where such a search will take us, no one can say. Nor is there persuasive reason to assume that when we get there, wherever “there” turns out to be, we will have created a new Jewish consensus. No, we will only have created another room in the Jewish mansion.

My hunch? That new room will soon be filled to capacity.

Finding a New Room in the Jewish House