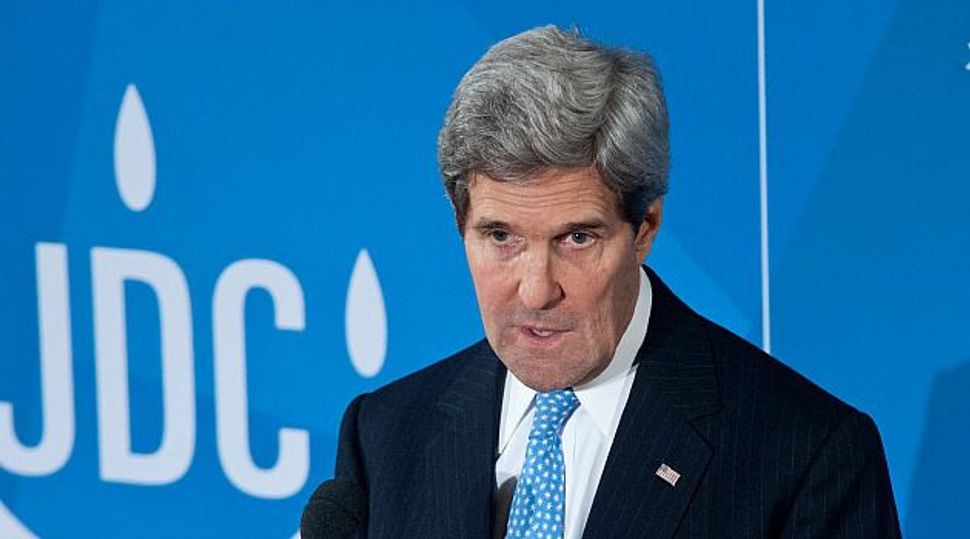 (JTA) — John Kerry is not a naive man. I met him recently at a luncheon at Georgetown University with a small group of Christian, Muslim and Jewish faith leaders brought together to hear the secretary of state’s frank reflections on the peace process.

While deeply aware of the complexities and obstacles to peace, Kerry is undeterred by the acrimony and intransigence that imprison Israelis and Palestinians in a devastating and soul-corrupting status quo even as the Middle East shakes around them.

There are many legitimate reasons to be skeptical of this latest round of peace talks. To reach a lasting, negotiated two-state solution, both sides will have to make excruciating choices on core issues from refugees to security to settlements to Jerusalem.

This is a rare moment – a precious opportunity for the American Jewish leadership to improve the prospects for lasting peace and security by providing the principled support that can embolden Israel to take the necessary steps to achieve both goals. Instead, too many leaders have opted for muted support of these efforts, shying away from the type of full-throated, ardent, sustained and public backing that will tap into our community’s desire for a negotiated two-state solution – offering instead quiet criticism, muttered cynicism or silence.

Driven by fear, distrust and even disdain, some in the Jewish community see the quest for peace – that is, an independent and viable state of Palestine alongside a secure and Jewish state of Israel – as driven by a reckless combination of naivete and arrogance.

I don’t see it that way, nor do most American Jews – the quiet majority, all-too-often marginalized when it comes to public discourse on Israel. They – we – love the State of Israel, believe that peace is possible, and see its pursuit not as a sign of weakness but rather as an expression of courage, compassion and faith.

More and more young people identify with this camp, unwilling to abide an untenable status quo that leaves Israel increasingly insecure, isolated and vulnerable to extremism. These young people are rightly convinced that a two-state solution is the only way Israel can live up to its own greatest aspirations as a Jewish and democratic state, end the corrosive occupation and have their Israeli counterparts grow up free from war and terrorism.

For these people, respect for the dignity of the Palestinian people and their national ambitions does not conflict with or undermine their deep love of Israel, but rather is an essential dimension of it.

Kerry has demonstrated that he will not veer off course when critics snipe or cynics carp. He will not be deterred by what he calls “the maximalists” on either side – those who will never be satisfied with anything short of everything, those who prefer land to peace, stasis to security, resentment to resolution. If Kerry succeeds, it will be because Israelis and Palestinians recognize that he has staked out a position that is firm, fair and, ultimately, sustainable – everything that today’s worrisome status quo is not.

If Kerry fails, it will be because the Israeli and Palestinian leaderships could not summon the courage to take the painful steps required for peace, security and dignity. And it will also be because those of us who so deeply want peace did not do enough to change the political climate in which the leaders are making their decisions. If Kerry fails, it will be because cynicism, myopia and a lack of urgency sabotage this opportunity to reach a negotiated two-state solution before another intifada, crisis or tragic loss of life leaves the region shaken and the parties longing for the reasoned principles on the table now.

Failure will be, in part, because we have allowed a small minority of oppositional voices to be heard over those in the United States who support the president, the secretary of state and the majority of Israelis and Palestinians who polls show support a two-state solution. If the silent majority remains quiet now, it will implicitly allow a short-sighted and self-defeating rejectionism to rule the day.

Let us not let that happen. This opportunity may not come again in our lifetimes, and the cost of failure will be unfathomably high, for both Israelis and Palestinians. Let’s help John Kerry succeed – let’s help Israelis and Palestinians succeed – by amplifying the voices of hope and possibility. Let them hear our cry and our call in Washington, Jerusalem and Ramallah: We stand with you in the fight for peace.

Rabbi Sharon Brous is the founding rabbi of Ikar in Los Angeles.