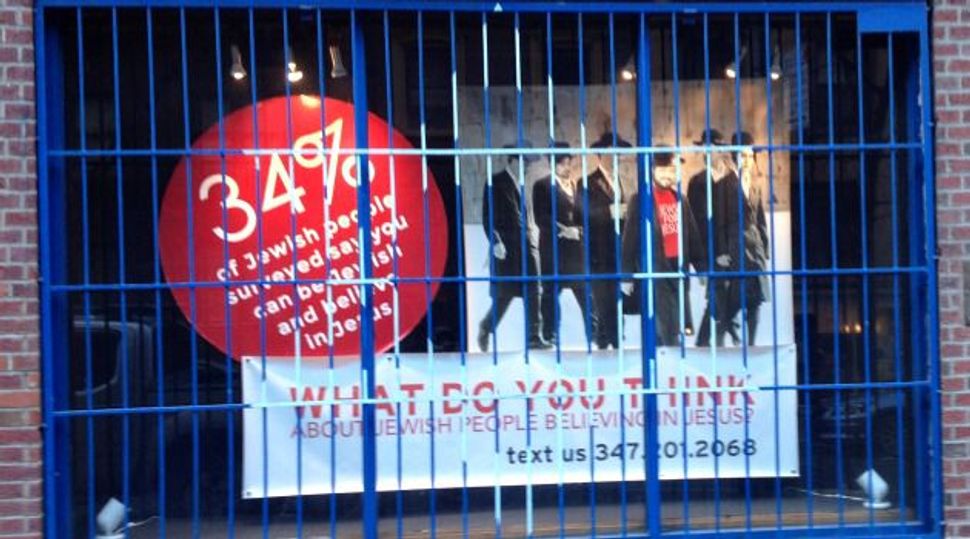 If you went searching for a mainstream Jewish organization that welcomed the findings of the Pew study of American Jews, which showed declining levels of Jewish affiliation and high levels of intermarriage, you’d be hard pressed to find one.

But so-called Jews for Jesus found news to celebrate: 34% of American Jews reported that a person can accept Jesus as the messiah and still be Jewish.

Now this perplexing finding of the Pew study has made its way into a storefront display in midtown Manhattan.

I’ve walked by this particular building on 31st Street several times without noticing it. But yesterday, I stopped in my tracks when I caught a glimpse of the photo in its window: a group of Hasids are seen walking in front of the Western Wall, and one of them is wearing a Photoshopped red t-shirt that reads “Jews for Jesus.”

But that’s not all.

The text printed beside the photo reads: “34% of Jewish people surveyed say you can be Jewish and believe in Jesus. What do you think about Jewish people believing in Jesus?” A phone number is provided – to which you can, apparently, text your answer.

This is a clever marketing tool for the Messianic Jewish movement, which has been roundly – and rightly – rejected by the mainstream Jewish community. One of the few points on which Jewish groups from across the denominational spectrum can agree is that Messianic Judaism is not Judaism, but simply a disingenuous form of Christianity.

But for a Jews for Jesus ministry eager for legitimacy, the study’s finding must have seemed like a godsend.

“We are encouraged to see more openness in the Jewish community to the fact that one can believe in Jesus and still be considered Jewish,” said David Brickner, executive director of Jew for Jesus, in a statement after the study was released.

Of course, the statistic does not necessarily mean what Brickner and Jews for Jesus hope it means. Jewish identity has traditionally been determined by birth, not belief; many of “the 34%” might find the concept of Messianic Judaism appalling, while still recognizing Messianic Jews as technically Jewish.

The poster did not include the fact that 32% of Jews erect a Christmas tree, or that – mind-bogglingly – 1% of ultra-Orthodox Jews do so, according to the survey, which admittedly has a significant margin of error for Orthodox Jews.

The New York branch of Jews for Jesus sends missionaries to the Macy’s Day Parade and the Times Square New Year’s Eve celebration and is active in the Russian Jewish community, according to its website. Its seven-story office houses a chapel and a training center for missionaries, which are sent all over the world to spread the gospel to Jews.

I do not plan to step inside. But I’ll be keeping an eye on the front window.