A Threat to Jews in Hobby Lobby Decision 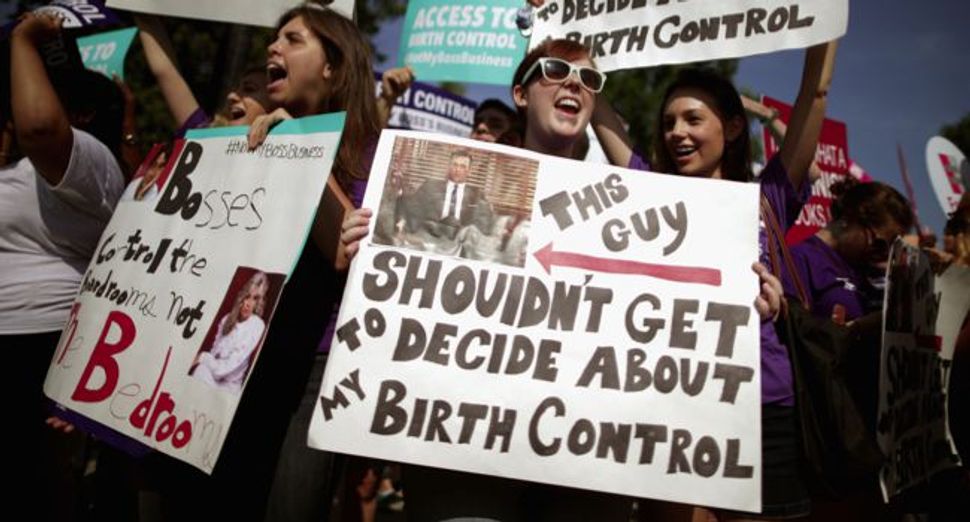 Our Rights: Protestors in front of the Supreme Court on June 30 to greet the Hobby Lobby decision. Image by Getty Images

Much ink will be spilled about the Supreme Court’s decision in the Hobby Lobby case. It affects many things: women’s freedom, the rights of religious conservatives, and, potentially, religious exemptions from a variety of civil rights laws and Obamacare.

The Court’s bitterly divided 5-4 opinion split on party lines: four conservatives siding with the conservatives, four liberals against, and Justice Kennedy concurring in the middle. But the net result is that closely-held corporations may withhold health insurance coverage that might be used for practices they find religiously objectionable. This is a significant boost for the “religious liberty” campaign.

What I want to focus on, however, is the curiously Jewish, even Talmudic, ways in which these cases have tended to unfold. Hobby Lobby is a fascinating example of this, but there have been others as well.

Recently, for example, “religious liberty” activists have admitted that the same rationale they have promoted in Hobby Lobby and in cases involving LGBT people would affect Jewish people as well. Earlier this month, Mat Staver of the U.S. Liberty Council was cornered by Congressman Jerrold Nadler (D-NY) into admitting that a photographer could object to photographing a Jewish wedding on “religious liberty” grounds.

And in May, Houston Pastor Betty Riggle admitted under questioning by City Councilwoman Ellen Cohen that stores could turn away Jews on religious reasons as well. Two separate incidents — both instigated by Jewish leaders at legislative hearings — but with the same result. The “slippery slope” of Hobby Lobby includes discrimination against Jews.

Both of these processes were Talmudic in tone. In each case, the conservative Christian activist protested that she or he wasn’t talking about Jews — and in each case, the Jewish interlocutor insisted that the logic applied to gays and women could equally be applied to Jews, could it not?

Finally, the conservative activists caved. In the words of the aptly-named Pastor Riggle: “No. No, I’m not saying — Yes, I am saying that, but that is not the issue that we’re talking about.”

Yet the Talmudic shoes were on the opposite feet in the Hobby Lobby opinion itself. Here, Justice Alito, writing for the Court, tended toward the Talmudic — and Justice Ginsberg’s dissent turned on larger issues of jurisprudence and justice.

Take the question of corporate personhood. In Hobby Lobby, the court decided that closely-held corporations are “persons” for the purposes of the Religious Freedom Restoration Act. This means that corporations, like human beings, may have religious beliefs that must be respected by the government.

To many of us, this seems patently absurd. As a lower court wrote, corporations “do not pray, worship, observe sacraments or take other religiously-motivated actions.”

Yet Justice Alito proceeded along highly Talmudic — even Pharisaic – lines. He noted that corporations are “persons” in other laws, like the Dictionary Act. He called a corporation “simply a form of organization used by human beings to achieve desired ends.” And he observed that religious nonprofit organizations are already granted religious exemptions – so why not for-profit businesses?

Justice Ginsberg, however, began with the bigger picture. Quoting an earlier opinion, she wrote that “the ability of women to participate equally in the economic and social life of the Nation has been facilitated by their ability to control their reproductive lives.” And throughout her opinion, she emphasized the disparate amounts women and men pay for healthcare, and are paid in the workplace. In a case largely about doctrines of religious liberty and canons of statutory interpretation, it was Justice Ginsberg who reminded us, again and again, that it was also about real women.

Unlike, that is, the corporate “persons” in Hobby Lobby. Justice Ginsberg marshals history, philosophy and jurisprudential values to support her contention that, Mitt Romney notwishtanding, for-profit corporations are not people. She spends little time with Alito’s meticulous statutory pilpul, and more closely resembles a prophet(ess) of doom, warning of “havoc,” “a minefield,” and “untoward effects.”

It’s a fascinating case of playing against type, or perhaps stereotype: Justice Alito, the fervent Catholic, seems like the Talmudic rabbi, while the Jewish Justice Ginsberg focuses on the spirit rather than the letter of the law.

Then again, maybe Ginsberg is more like Nadler and Cohen than she first appears. All three are personally affected by these claims of “religious liberty,” Nadler and Cohen because they are Jewish, Ginsberg because she is also a woman. And all three have stood up to the hand-waving claims of religious conservatives, pointing out the very real targets of their claims of conscience.

Until Hobby Lobby, religious liberty was a shield, not a sword. It protected minority religious practices — including Jewish ones — from majority tyranny. Hobby Lobby, however, has opened the door to companies opting out of all kinds of laws: anti-discrimination laws, the Affordable Care Act, you name it.

Unlike past efforts at discrimination, which attacked the humanity of women, LGBT people, racial minorities, and Jews, this new effort does so in neutral language. Who doesn’t want to protect religious liberty, after all? And, to be sure, it does feel like an abridgment of rights when suddenly one has less power over others. Most religious conservatives are sincere in their beliefs.

But not, I would suggest, in their rhetoric. The owners of Hobby Lobby are offended by contraception and abortion. Their tie to it is tenuous at best — paying into a general insurance pool, some of which may be used if a woman later requests it to obtain contraceptive care for herself. But they are fighting a cultural war, and to win a war takes tactics.

In that regard, what is important about Nadler, Cohen, and Ginsberg is less the style of their legal argument than of their resonance with an even older Jewish form of language, going back to the patriarch Abraham. Hineni, they are saying to those who would justify discrimination. Here I am.

A Threat to Jews in Hobby Lobby Decision