Where Is Our Compassion? 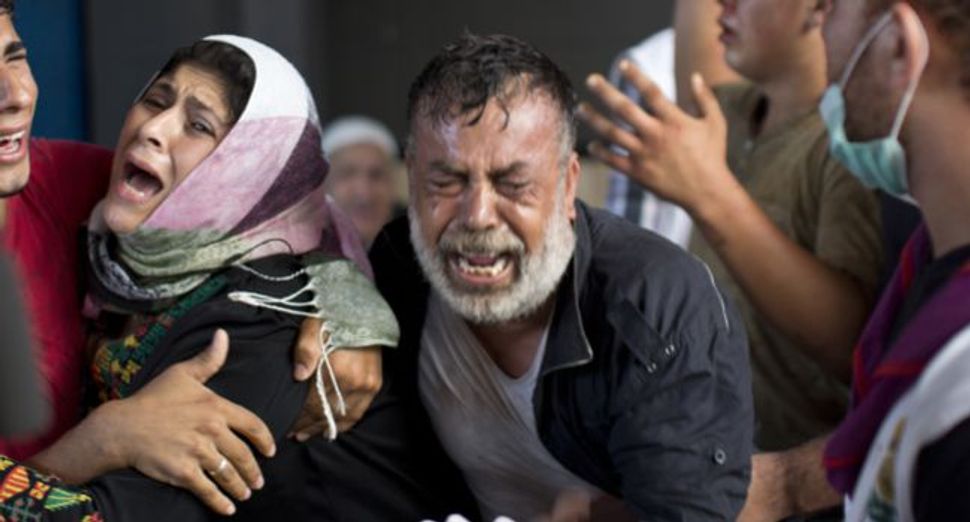 Human Pain: Could we respond with more sympathy to their loss? Image by Getty Images

It is all too easy to become inured to the horrors of war. What at first shocks us soon ceases even to arouse our attention. After decades of violent conflict, Israelis have become tragically accustomed to violence. Operation Protective Edge is just the latest in a long line of military operations and wars that Israel has fought since its establishment. Even in the breaks between these conflicts, the violence has been relentless. Infiltrations, suicide terrorism and now rocket attacks have ensured that violence is a recurrent, almost habitual feature of life in Israel. The result of this has been a deeply traumatized and desensitized population.

More than anything else, it is this constant exposure to violence that explains why so many Israeli Jews seem unmoved by the massive violence their army has unleashed upon Gaza. They are convinced that this violence is a fully justified and necessary response to Hamas’s rocket attacks and tunnel infiltrations. Polls show that Israel’s military operation in Gaza is hugely popular in Israel. But a popular war could still evoke sympathy for its innocent victims. There are many such victims in Gaza. Palestinian men, women and children trapped in a war zone, terrified, and increasingly without access to basic necessities. Yet their plight, not to mention the hundreds of Palestinian civilians killed, seems of little, if any, concern to Israelis determined to inflict a punishing blow on Hamas.

In my conversations with them, Israeli Jews view the deaths of innocent Palestinians as collateral damage. Their violent deaths do not elicit much anguish or remorse. At most, there is a cursory expression of regret before the blame is quickly placed elsewhere — on Hamas’s shoulders. This ability of some Israeli Jews to so easily dismiss Palestinian suffering is a byproduct of their long conflict with the Palestinians. Palestinians have long since just become the enemy, an object of fear and loathing. As they have been almost completely dehumanized in the minds of many Israeli Jews, their deaths have become all too easily disregarded.

While the lack of compassion shown toward Palestinian suffering is lamentable but ultimately understandable, given the persistent violence they have endured and the collective trauma this has caused, this is not true for American Jews who live in relative safety and security and have no personal experience with Palestinian terrorism. How, then, can we explain the reaction of many American Jews, and especially their official representatives in major Jewish organizations from ADL to AIPAC, to the military operation in Gaza and the terrible toll it has taken on Palestinian civilians?

This reaction can be characterized only as indifferent, at best. In stark contrast to the outpouring of sympathy for Israeli civilians terrorized by Hamas’s rockets, I see very little expression of concern for the welfare of Palestinian civilians terrorized by Israeli airstrikes and artillery fire. This is not to equate the two: Hamas intentionally targets civilians, Israel does not. But the fact that Israel does not intend to harm Palestinian civilians does not mean that we should not openly and loudly lament the fact that it frequently does. We can mourn the tragic consequences of Israel’s actions even when we understand the reasons for those actions.

As the military conflict in Gaza grinds on, and the cost to innocent Palestinians continues to mount, it is vital for us to recognize this and act on it. Until now, the American Jewish community has rallied to support Israel in word and deed, while almost completely ignoring the suffering of Palestinian civilians. All too often, American Jewish declarations and gestures of support for Israel fail even to acknowledge Palestinian suffering, let alone to provide some concrete relief for it.

What lies behind this apparent callousness? No doubt it is the natural tendency of groups to tend to their own victims and focus on their own suffering. Jewish fears and historical memories also play a role, as many Jews continue to harbor deeply rooted suspicions of widespread anti-Semitism and believe that Jewish survival must be staunchly and unapologetically defended at all costs. These attitudes are certainly not easy to change. But there is also a belief among many Jews that any expression of anguish or sympathy for the suffering of Palestinian civilians would undermine Israel’s cause and play into the hands of the country’s enemies. This belief is fundamentally misguided.

To sympathize with Palestinian suffering is not to condemn Israel or condone Hamas; it is simply an expression of our humanity, as well as of our Jewish values. The ardent desire to demonstrate solidarity with Israel should not come at the expense of our humanitarian consciences. This not only erodes our moral character as individuals and as a community, but also risks alienating many Jews who rightly agonize over the humanitarian costs of Israeli military actions. As human beings and Jews, we should never let our support for Israel harden our hearts to the suffering of others.

Dov Waxman is a professor of political science and Israel studies at Northeastern University and the author of “The Pursuit of Peace and the Crisis of Israeli Identity: Defending/Defining the Nation” (Palgrave Macmillan, 2006).

Where Is Our Compassion?