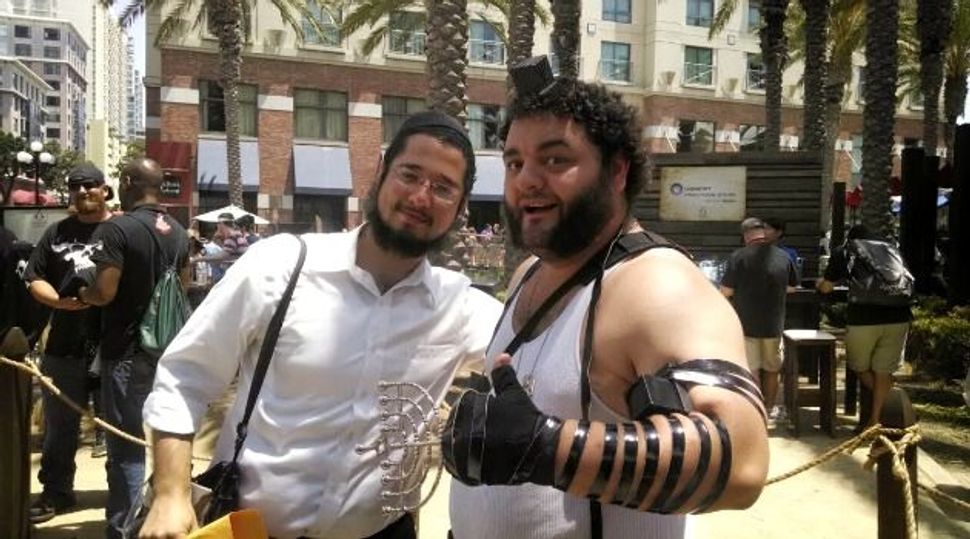 What’s it like to host Shabbat dinner at Comic Con?

This year, my wife Chana and I decided to find out. We attended S. Diego Comic Con International, the annual nerd mecca that ran this past weekend and attracts comic book fans and pop culture geeks from around the world.

There Batman and Darth Vader cavort with Master Chief and Naruto while Hollywood execs showcase their coming attractions, all in S. Diego’s Gaslamp district. It’s intense — and seemingly completely opposed to a traditional Shabbat experience.

Nevertheless, we came prepared to host #openShabbat, an unplugged networking event and Shabbat meal that started with 50 people in 2011 and has since grown to over 150 people. An inclusive community focused on enjoying an island of serenity during the chaotic digital experience of the festival, #openShabbat has always been more about an exploration of our culture — a chance to analyze who we are as Jews and citizens of the world — rather than a purely tech-based experience. But what drew us to Comic Con this year was the potential to create a space to explore who we are through the media we produce and consume.

As a Jew, I find it fascinating to see the way Jewish identity has shifted in pop culture. In early Hollywood, Jews largely avoided open identification with their tradition. Early superheroes conveyed the dialectical tensions young Jews at the time struggled with as they navigated both their Jewish identities and the American ideals they encountered. As Larry Tye has noted in the Forward, Superman conveyed the dual identity of the American Jew.

By the 1960s and 70s, Jewish identification came to the fore with the likes of Philip Roth, Woody Allen and Lenny Bruce — people who are very open about being Jewish, but who are filled with angst. For them, being Jewish was often understood as a pathological struggle to be enjoyed and dreaded at the same time.

Today we seem much more comfortable with our Jewish identities. John Stewart, Seth Rogen and Matthew Weiner among a plethora of others almost celebrate their Jewish identities, putting that identity front and center in the content they produce.

At Comic Con, my wife and I joined Rabbi Zalman and Nechama Carlebach, the Chabad emissaries to Downtown S. Diego, for a combined Shabbat experience with the local community. There, we discovered something amazing.

Some 70 people, 20 of them attendees at Comic Con, sat down for the #openShabbat meal.

A girl with blue hair and a long black cape sat across from ‘Jewverine’, a self-created mashup sporting hair and clothes like Wolverine from the X-Men complete with a yarmulke and ‘adamantium’ menorahs growing out of both hands.

Sitting next to me was the writer for a number of popular shows, including a leading sitcom. As we sipped He’Brew beer, our conversation focused little on his work or mine; instead, it revolved around the inner workings of Lurianic Kabbalah and the human quest for truth. Another writer, this one soon to launch a new show on a Viacom property, spoke to the crowd about the infinite nature of the human journey as expressed in the Exodus from Egypt.

These conversations were nuanced and deep, thoroughly sourced in Jewish ideas and Torah thought. Only one of these men was Orthodox, but both of them, masters of pop culture, had a thoroughly passionate understanding of Jewish thought.

Some may cynically dismiss them as living dual lives, personally consuming Jewish thought and philosophy while creating works of culture that are devoid of it. But I can’t help feeling that perhaps we’re on the cusp of a new epoch in Jewish identity in popular culture. Perhaps we’re witnessing creative Jews who are proud not only of Jewish culture, but of something deeper as well. For the Jews at Comic Con, it seems, creative media can be tools to convey the positive — and in many cases universal — values our tradition has to offer.

Mordechai Lightstone is a rabbi by training, a director of digital communications by profession but a blogger by choice. He can be reached on Twitter @Mottel