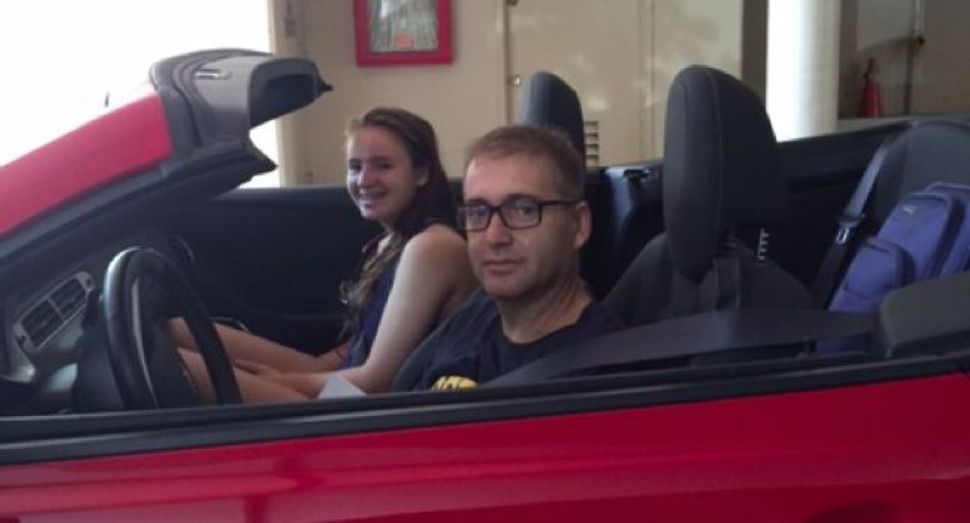 Hanoch Sheinman, the philosophy professor at Bar-Ilan University’s law school caught in the midst of a fierce controversy involving an email sent to his second-year law students, expressing sympathy for all victims of Israel’s Gaza conflict, phoned me in frustration because he couldn’t manage to shut the roof of his rented convertible. I had emailed him the previous day, as an expression of support, and since he happened to be in the San Francisco Bay Area, we decided that he would come over to talk about his problems.

It ought to have taken no more than 50 minutes or so to travel to our house in Berkeley from Palo Alto, but three and a half hours later, Sheinman, a bushy-haired, ruffled man in his mid-40s, arrived, his 15-year-old daughter at his side (she was participating in a Stanford debate camp). He was complaining ruefully about the complexities of convertible roofs, the chilling Bay Area summer fog and his mechanical ineptitude.

Sheinman is a slightly built, gently self-abnegating man, a specialist in the intersection of ethics and law in his second year of teaching at Bar-Ilan; he previously taught at Rice. Speaking with him and his daughter, I was left with the unsettling impression of a deer caught in the glare of headlights. The dilemma in which he now finds himself, one that could well cost him dearly, was born of no more than Sheinman’s basic decency, his acknowledgement — anodyne in other times, potentially lethal in ours — that the suffering of all hurt by the Gaza conflict was worthy of mention.

Three or four days earlier he had sent an email to his students, many of whom were now in uniform. The email contained instructions about the rescheduling of exams. He opened the email with the wish that it “finds you in a safe place, and that you, your families and those dear to you are not among the hundreds of people that were killed, the thousands wounded and whose homes were destroyed or were forced to leave their homes during or as a direct result of the violent confrontation in the Gaza Strip and its environs.”

Almost immediately, his dean, Shachar Lifshits, responded with a collective email in the name of the law school faculty, insisting that Sheinman’s note was “hurtful,” especially to those students involved in battle and to their family members. He added: “Both the content and the style of the letter contravene the values of the university and the law faculty…. This constitutes the inappropriate use of the power given to a lecturer to exploit the platform given to him as a law teacher… that… seriously offended the students and their families.”

There is no reason to doubt that Lifshits is telling the truth when he says that Sheinman’s email offended. And that’s the problem. That he then goes on to say that the sentiments expressed in it conflict with the values of his university, an institution inspired by religious convictions, chills one’s bones. And this from an institution, indeed a law school, that ought to be keenly attuned to what an inability to empathize with basic humanity can result in: Yitzhak Rabin’s assassin, Yigal Amir, was a law student in November 1995 at the time he murdered the prime minister.

Never before in an Israeli military conflict has the mere expression of empathy for Arab civilian dead and wounded been seen, beyond the political fringe, as akin to betrayal. There is more and more evidence that this is the situation we face now with the Sheinman episode — a strikingly benign affair that is all the more illustrative because of that: It is one of those rare moments in life of stark, utter clarity, an uncluttered story of decency thwarted by indecency. Sheinman’s comments were not political; they were humane. If anything. he suffers from a more than mild dose of healthy naiveté, not malice. Many are now suffering, including not only his own students but also thousands of others, and it was this, only this, that Sheinman meant to acknowledge.

Sheinman’s dean has asked him to apologize. But it’s Lifshits who ought to offer an apology, and not only to Sheinman. Wars are revoltingly indecent moments, even when they’re tragically necessary, and in their midst, when someone reminds us of the basic humanity of those caught up in them, and especially when this is someone hired by his law school to help its students wrestle with ethical issues, it’s best to thank him, not punish him.

Steven J. Zipperstein, Daniel E. Koshland Professor of Jewish Culture and History at Stanford University, is the author of “Elusive Prophet: Ahad Ha’am and the Origins of Zionism” (University of California Press, 1993).