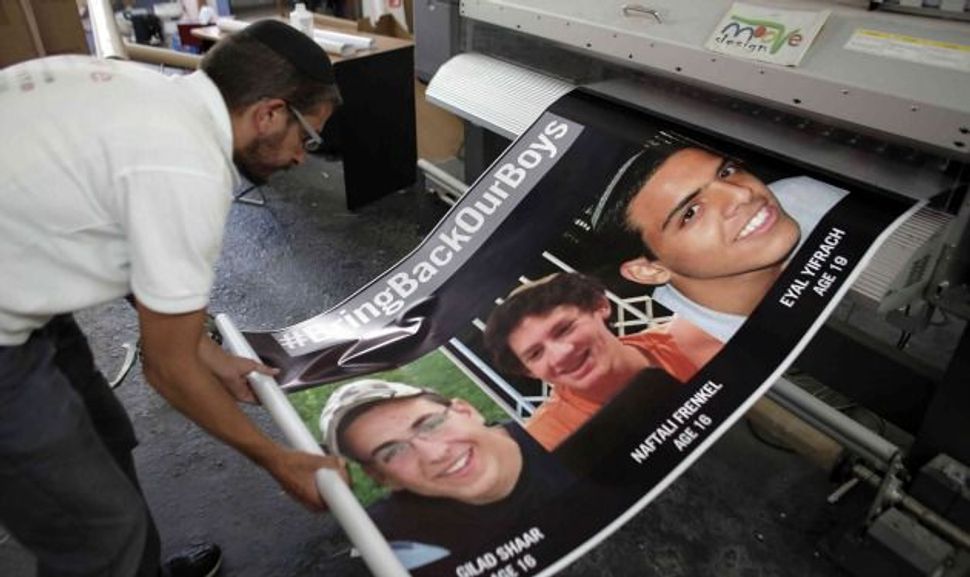 An Israeli military court handed down an indictment Thursday morning against a member of Hamas’ Hebron branch, Hussam Qawasmeh, charging him with helping to plan the June 12 kidnapping of three Israeli yeshiva students near Kfar Etzion in the West Bank.

The document, as described in Israeli news reports, spells out a detailed, almost day-by-day account of the crime’s planning, execution and aftermath. The most thorough account, published in the conservative daily Maariv (here, Hebrew only), summarizes the plot from the hatching of the idea by the still-at-large kidnapper Marwan Qawasmeh and his pitching it in April 2014 to his brother Hussam, to Hussam’s raising money from another brother, the Gaza-based Mahmoud, and purchasing of weapons, vehicles and stolen Israeli license plates, to the kidnapping itself, the panicked murder of the victims, disposal of the bodies and evidence, the escape of some suspects and capture of others.

What it doesn’t offer is any evidence that the leadership of Hamas — or anyone else outside the Qawasmeh family, which controls the organization’s notoriously undisciplined and incompetent Hebron branch — had any knowledge of the crime before or after its commission. On the contrary, the indictment strengthens the argument I laid out in July that the kidnapping was a Qawasmeh family production from start to finish. (Read about the Qawasmehs and their chaotic relationship to Hamas in this article by scholar Shlomi Eldar in the liberal-leaning Al-Monitor, or this largely identical account in Hebrew by reporter Assaf Gabor in Maariv.)

A second Maariv article on the indicment names a total of 11 suspects accused of involvement in various stages of the crime. Eight are Qawasmeh brothers and cousins: Marwan and Hussam; Arafat and Ahmed, who allegedly helped hide the kidnappers; and Hashem, Hassan and Jamil, who allegedly helped Hussam try (unsuccessfully) to escape. Two more are members of the Abu-Eisheh family, cousins of the Qawasmehs: Amar Abu-Eisheh, the second suspected kidnapper, who is still at large, and Noah, who allegedly sold Hussam the kidnap and getaway cars. Only one non-family member is accused of involvement: Adnan Zaro, who allegedly sold Hussam the kidnap weapons, two pistols and two M-16 assault rifles.

As Isabel Kershner, one of Israel’s smartest and best-connected Arab affairs reporters, points out in her New York Times account of the indictment, the precise nature of the link to Hamas is significant because Israel’s Prime Minister Netanyahu explicitly blamed Hamas for the kidnapping within days after the boys went missing. Netanyahu vowed that Hamas would “pay” and used the allegation as a pretext to round up more than 300 Hamas members in the West Bank, raising tensions in Gaza that eventually triggered the war. Netanyahu promised at the time that evidence would be produced in the near future proving the Hamas leadership’s involvement. That was nearly three months ago.

Many readers have written to me since my July 11 article, pointing to various news reports seeming to indicate that Hamas had “admitted” it was responsible for the kidnapping. There have indeed been numerous headlines claiming Hamas admitted it was behind the deed. In each case, however, the headlines went with articles that said something different: that the kidnappers were members of Hamas, a fact that was never in dispute. The first round of mismatched headlines and news reports followed an August 20 speech by Hamas bigwig Saleh al-Arouri to an Islamic scholars’ conference in Istanbul.

The next accompanied an August 23 Khaled Meshaal interview with Yahoo News. Neither article made any suggestion that the organization had ordered, sanctioned or even knew about the kidnap plan before it was reported by Israeli news media on the morning of June 13. Meshaal, in fact, stated explicitly that Hamas hadn’t known, as he said to Al Jazeera June 24 and to Sky News on July 3.

Sky News reported at the time, citing unnamed Hamas officials, that Hamas had asked Turkey to tell Israel the organization wanted to restore calm and avoid escalation. This was in the immediate aftermath after several rounds of escalating exchanges — several barrages of radical jihadi rockets that Hamas failed to interdict in June, Israel’s accidental killing of a Hamas operative during a retaliatory strike on a jihadi rockets squad June 30 and a Hamas rocket barrage July 1 in retaliation for the killing — were leading the two sides to the brink of war.

BBC reporter Jon Donnison caused a brief stir at the end of July when he tweeted a quote he said he’d gotten from Israeli police spokesman Micky Rosenfeld, describing the kidnappers as a “lone cell.” After some fireworks from government circles in Jerusalem, Rosenfeld denied to Daily Beast diplomatic reporter (and former Forward staffer) Eli Lake that he’d said that to Donnison. Rather, he said, he described the kidnappers as “Hamas terrorists.” Which is what we already knew.

So far the only link investigators have turned up between the kidnapping and anyone in Gaza is the $60,000 — 220,000 shekels — that Hussam Qawasmeh obtained to buy the vehicles (one to carry out the kidnapping, a second to escape after incinerating the first) and guns. The source was yet another Qawasmeh brother, Mahmoud, who was expelled to Gaza after being freed in the Gilad Shalit deal and is now, according to Kershner, working for a Hamas-linked foundation. It’s not clear whether Mahmoud got the money from a source closer to the Hamas leadership or somehow finagled it from the foundation. Either way, the Shin Bet reports that Mahmoud himself wasn’t fully informed how the money would be used. Hussam merely told him it would be used for an unspecified “military operation.”

Beyond the continued failure to link the kidnapping to the Hamas leadership, the indictment provides some additional information on the Qawasmehs’ staggering incompetence, on a scale utterly uncharacteristic of other Hamas operatives. First was the fact that when Marwan first approached Hussam to propose kidnapping Israelis in order to free Hamas prisoners, Hussam emphasized the importance of keeping the victims alive to preserve their usefulness as bargaining chips. When the kidnappers picked up the three students, however, they discovered almost immediately that they had no way of keeping them under control and in the resulting panic they killed them, just minutes after kidnapping them.

Second was the decision by Hussam, when Marwan came to him with the bodies, to bury them on a plot of land he had recently bought just outside the village of Halhoul, north of Hebron. It was only after he and the kidnappers had finished burying the bodies and parted ways that Hussam realized the land was registered in his name, making him a marked man. He then began a rushed an ultimately unsuccessful attempt to disguise himself, obtain false documents and escape to Jordan. He got as far as a refugee camp outside Jerusalem before he was picked up by Shin Bet agents July 11.

Wikipedia has an article on the Qawasmeh clan that’s interesting for how many members have engaged in terrorist activity — and how few of them managed to elude capture or killing.