Judging Ray Rice Instead of Ourselves 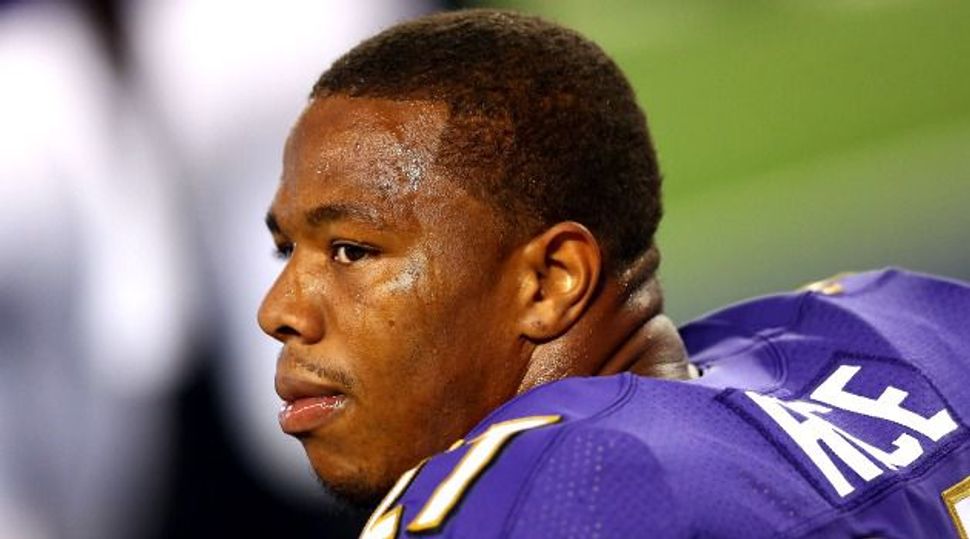 “Justice, justice, shall you pursue,” we are taught — and what could be more just than punishing a man shown, on video, punching and knocking out his wife in what seems like a brutal, cruel attack?

Thus have we seen, in the last 72 hours, a cascade of condemnations of (now former) Ravens running back Ray Rice, suspended from the NFL and facing criminal charges. Perhaps most articulately, my friend Jodi Kantor wrote movingly in the New York Times about how Janae Rice, who has defended her husband, shows all the signs of a trapped, coerced and battered wife.

The only trouble is — all this is guesswork.

In fact, the public judgment of Ray Rice is a rush to judgment, and a uniquely 21st century combination of the surveillance state, ruthless corporate capitalism and celebrity culture. It makes a scapegoat out of Rice and lets us all cluck our tongues while the gladiator sport that is professional football can continue to entertain us.

What do we know? We know that something awful happened in a hotel elevator last February, and that Ray Rice punched his then-fiancee so hard that she lost consciousness. (The video suggests that the two of them were pushing and hitting each other beforehand — not that that really matters.)

We also know that Ray Rice’s job is to be tough and violent on the field, and that he succeeds at it, much to the delight of fans. Fans who now profess shock — shock! — that a young man trained to be violent, praised for being violent, paid millions of dollars for being violent, and treated as a kind of modern god… might in fact be violent off the field as well as on it.

But we have no idea if this was a pattern; if Mr. Rice has been counseled, pastored, reeducated or guided; if he has atoned, repented, apologized. We especially do not know whether Janae Rice is, indeed, a battered wife, and, in Kantor’s words, “an extraordinarily public example of the complex psychology of women abused by men.”

For example, read the only acknowledgement in Kantor’s entire piece that everything she says is based on speculation:

Several experts in domestic violence cautioned that much was unknown about the Rice case, starting with whether the football player hit his partner more than once. But they added that economic reliance was a leading predictor of whether a woman would leave her abuser.

That’s it — no quotation, in contrast to seven (!) direct quotations of people opining that people like Janae Rice have no agency, are traumatized, and are too financially dependent upon their abusers to think clearly. No quotations of spouses who defended their husbands’ transgressions and do not regret doing so. Just a lot of circumstantial evidence of the power differential in the Rice marriage (he’s a millionaire, she isn’t; he’s a football player, she isn’t) leading to a strong inference that Janae Rice can’t really mean what she says.

As a man, a white man, and a privileged white man, I, for one, am deeply reluctant to take such agency away from women of color who are telling their stories as they understand them, even if doing so is in the name of feminist legal theory. Maybe Janae Rice is, indeed, a victim of abuse, and maybe that abuse has been so horrific that her own statements must be discounted. But I set an exceptionally high bar before taking away a woman’s agency and capacity to speak for herself.

Thus when Ms. Rice writes “Just know we will continue to grow & show the world what real love is,” my default assumption must be to take her at her word, absent compelling evidence to the contrary.

And then there’s what’s happened to Ray Rice as a result of this debacle. The criminal indictment is appropriate for Rice’s conduct. But the NFL summarily firing him, upon the sudden discovery (yeah, right) of this video is extremely worrisome. This wasn’t the NFL exercising the “morals clause” in player contracts. This was the NFL in damage-control mode. The last year has revealed the league to callously ignore evidence of serious head injuries, to brush aside hazing and to tolerate a culture of pervasive violence. They could brush aside the Rice indictment when only half of the video was known to the public — but once the tabloid-TV site TMZ made this public, Rice had to go.

Now, let’s look at that more carefully. What is the NFL really being accused of here? Simply resembling the sport it promotes. America loves football, and loves violent football. But somehow the football league is meant to resemble a boy scout troop. Come on. If you pay to watch tough guys make hard hits, you are supporting the kind of culture that promotes that behavior. Of course, the excesses of the Miami Dolphins’ hazing bullies and the quashing of scientific data by the NFL should be investigated and stopped. But to imagine that this is just the work of a few bad actors is pure self-deception. We all bear responsibility for this violent culture — because we love it.

And now let’s unpack the sequence of events. Surveillance cameras, ostensibly used for law enforcement and security, are now routinely the sources of salacious imagery for tabloid consumers. Consider the elevator fracas involving Beyonce, Solange and Jay-Z, for example. This footage should never have been released to the public, let alone to outfits like TMZ. But it was, and we all lapped it up. Once again, the guilty party is Us, the millions of people who gawk, judge, finger-wag and otherwise hypocritically judge at celebrities.

And then, this footage having been recorded by surveillance equipment and released to the public, an employer used it to fire an employee. Suppose the employer were an accounting firm and the employee an analyst caught smoking pot in a hotel elevator. Would we all support the firm’s firing of the employee? Or would we consider it a grave violation of privacy?

I am not entering a plea of not-guilty for Ray Rice. I am saying that the rush to judgment is deeply troubling. We really only know what a for-profit media company has chosen to show us, for our entertainment, of someone paid to entertain us with violence now using violence in a horrible way. But instead of recognizing the cultures of violence, celebrity, surveillance and privacy-invasion in which we all participate, this is an occasion to make him a scapegoat for us all.

Along with general injunctions to pursue justice, the Jewish tradition also has strict rules of evidence that must be applied before rushing to judgment. Such standards have not been met here. Although the surveillance video tells us much about what happened on a night in February, it tells us nothing about whether Janae Rice is right or not, whether Ray Rice is a monster or not, whether this was an incident or a pattern.

Our celebrity culture’s hypocritical rush to judgment says more about us and our insecurities than it does about the guilt of the judged. We rush to condemn for we are the ones deserving of condemnation.

Judging Ray Rice Instead of Ourselves