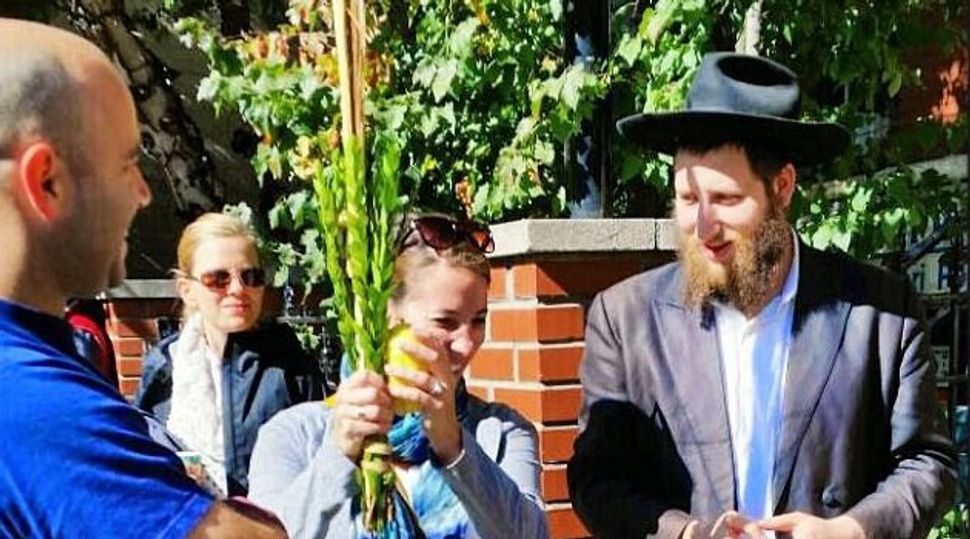 Mordechai Lightstone demonstrates the proper use of a lulav

I was harassed by the police outside of Kalamazoo, Michigan for using my lulav and etrog.

Last Tuesday, while traveling between Chicago and Detroit, my family and I stopped at the Kalamazoo Air Zoo. Traveling with small children is always a challenge, and the museum offered a needed break from the drive.

The autumn air was cool and crisp, redolent with the earthy smell of dried leaves and moist soil. The parking lot was deserted. I decided to pray next to our car among the changing maples and oaks.

Some people like to flaunt their public prayers, waving their tallis in the air, practically shouting the words. Others seek to hide from the public, searching for empty rooms and dark corners. I believe I’m somewhere in the middle, not afraid of my Jewish beliefs but hardly ostentatious.

At end of the Hallel prayer, I was surprised to hear someone say: “Oh. It’s some sort of Star Wars sword.”

I turned to see two police officers approaching me cautiously.

Apparently a guest at the museum had approached the front desk — where someone had actually seen me earlier when I got a pass to enter with my family — and complained about “a man donning multiple cloaks and brandishing a sword in some sort of ritual.” The front desk called the Portage Police.

“What are you doing?” one of the officers asked me, his hand on the firearm holstered at his side.

“I’m a rabbi visiting the museum with my children and wife as we drive from Chicago to Detroit,” I told them. “I’m just catching up on my prayers while they’re inside.”

“But what’s that in your hand?” asked the second officer, a blonde woman with her hair pulled back in a bun.

“It’s a religious symbol for our holiday,” I replied.

As far as I was concerned, the conversation should have ended there, with this sequence of events: local has misunderstanding about religious item; police confirm that said item is an over-priced Italian lemon and a few branches; everyone hugs; roll credits. I believe that every opportunity gives us a chance to learn, and I wanted to tell them about Leviticus and perhaps even Palm Sunday…but they pressed further.

The way he said “here” was unsettling, as if the question wasn’t why here and not down the block, but why here at all.

“Well,” I said. “I wanted to pray and I figured that it was quieter outside than in a museum, with kids running around and all.”

“Yes,” the first officer said. “But why in the front of the parking lot?”

“It’s a lovely day out. I spent the morning in the car and I wanted some fresh air.” I was starting to feel upset. This should have ended already. “Is there a problem?” I asked.

“You see, we got a call — someone thought you had a sword.”

“As you see,” I said, “it’s just a palm branch. Obviously people may not be familiar with it, but it’s not a weapon.”

“How much longer will you be out here?” the second officer asked brusquely.

“Does it matter?” I asked. “I mean, I’ll be done in five minutes, but honestly what’s wrong if I’m out here for another half hour?”

“You understand,” the first cop continued, as if it were obvious, “how this all looks. How someone could make a mistake like this. With you here and all.”

“Well, I get the confusion, but honestly, I think it’s a beautiful thing that as a rabbi and an American, I can practice my freedom of expression and worship wherever I want. It’s a good learning experience for everyone. I mean now, if they call, you can just tell them it’s a rabbi observing the Bible.”

“Well,” said the other cop, “you certainly are the first rabbi” — rabbi, not Hasidic rabbi mind you — “that I ever met.”

They pushed me for my name and took down my license plate number for their report and then drove off.

I believe that in a perfect world, whoever called 911 would have asked me what I was doing first. I’ve had people ask me if my lulav was some sort of cosplay device before, and I’ve had Japanese tourists take their picture with me holding it. I love it when people can learn and come together.

But we don’t live in a perfect world and I honestly don’t blame someone else for their confusion — though, would it have killed them to look a little harder and see that I was holding a bunch of plants and an oversize lemon in my hand?

The front desk at the museum apologized profusely when I came in. I’d fit the “warning signs” they’d been briefed on, so they called the cops. “What with the way the world is today, and the military nature of the air museum,” the lady told me, “you can never be too careful.” But they were, and I believe them, very, very sorry.

Still, I question why the police officers were so strident. I get that they were doing their jobs, but their repeated questioning had more to do with justifying why they were suspicious than ending a simple misunderstanding.

Let’s be honest: In my opinion, they came running because they thought I was a Muslim and seemed bothered that I was a visibly practicing Jew. Neither assumption was justified. I’m sure that, had I been bowing to Mecca and not Jerusalem, the ending would have been much worse.

When I left, I saw two memorial bricks in front of the museum, dedicated in honor of what appear to be two cousins who flew in the Luftwaffe. Doing a search later, I saw a local article about an event honoring American and German pilots of WWII.

“A mutual respect [was] understood by visitors who came… to remember the veterans of World War II,” wrote Nicole Jacques for the Battle Creek Enquirer, “regardless of who was the enemy or ally in the past.”

If only I had been accorded the same dignity.