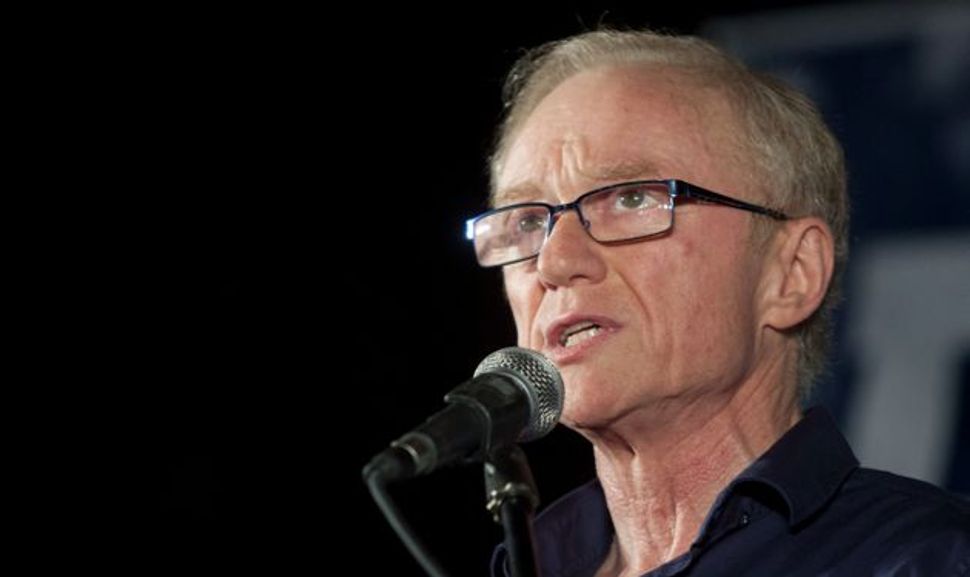 Outspoken: Grossman at a demonstration calling for negotiations between Israel and the Palestinians on August 16 in Tel Aviv. Image by Getty Images

This past year saw the publication in English of the renowned Israeli author David Grossman’s latest book, “Falling Out of Time.” It’s a sustained meditation on grief told as an allegory and mostly in verse — a book filled with the raw emotion that Grossman feels every day over the loss of his son, Uri, in battle, in 2006. He spoke to me about the book, but also about the mental state of Israelis at the end of 2014, in the wake of this summer’s war in Gaza.

Gal Beckerman: In an op-ed you wrote during the war, you stated that something had shifted in Israel, that Israelis were finally becoming aware of the mechanism beneath the cycle of violence — that they had “grown up,” as you put it. Do you still think so?

David Grossman: Actually, the most obvious thing that I see when I look at Israel today is how quickly most people here just suppressed and forgot this war, maybe because it was such a traumatic and humiliating experience that people don’t want to remember it at all. Of course except for those who have no choice, and they remember it every day and every hour. For most Israelis it is as if this war did not happen.

There was a bit of hopefulness in that op-ed. You held out the possibility that Israelis would learn something, that people were waking up. But it sounds now like you’re saying that they went back to sleep.

I do not feel that they want to be awake when they look at this war. They don’t want to be reminded, even. In a way it also contributed to the general fatalism that prevails here, fatalism that says that probably we are doomed to fight time and again, and to live by the sword and to die by the sword.

I think we shall know more about the subcurrents within Israelis in three months, when there are elections. Because then many things will surface again, including the memory and the lessons of the last war. And then we shall see what happens with the traditional voters of the right wing, of the Likud, those who, by the way, suffer quite a lot from the economic policies of the Likud but have kept voting Likud because their parents did and their grandparents did. But maybe now, in a kind of later aftershock, there will be a new sobriety as we look toward the destiny that people like Benjamin Netanyahu are leading us to.

Do you sense any kind of enthusiasm about the way that the left is aligning now in preparation for the elections?

There is now after the unification of Yitzhak Herzog and Tzipi Livni a kind of momentum, which is refreshing because people on the left have not experienced such a glimpse of hope in years. At the same time we have to look at the big blocks here and see that the right wing block is still stronger and more solid. And the votes of its supporters are secured. But who knows?

Well, usually only one thing happens: The right wing wins. But let’s see. Sometimes when a people who are so immersed, as we are, in despair experience a new wave of ideas, of options, of languages, it can awaken us. But let’s wait and see.

You still sound hopeful to me.

I cannot afford the luxury of despair. It’s so easy to be desperate here. Really there are so many reasons to be hopeless. And at the same time I feel that sometimes even the act of hoping generates some hope and shows elements in reality that are hopeful. And despair after all is humiliating. If you despair you declare that you are a victim of the situation, that you have no control over circumstances, that you are at the mercy of the behavior of your opponents, that you are totally trapped and motionless. And this is an unbearable feeling.

I’m curious about what you, a champion of the two state solution, make of the suddden popularity of the one-state idea.

I really think that the idea of a binational state is another symptom of the despair, of feeling that the two-state solution cannot be achieved now. But really it is so hard to see these two people, after a hundred years of hating each other, functioning in a democratic, egalitarian way in one state. The result of this state would be deepening the deprivation of the Palestinians. Because you can’t seriously believe that the Israelis, who are oppressing and depriving the Palestinians in almost every way, will give them an equal place in the army, in the security service, in economy, in all walks of life. On the contrary, I think that the Israeli Jewish security mechanisms will become much more intrusive and embitter the lives of the Palestinians. The idea of a binational state is an idea for two mature communities, and even then it doesn’t work. Look at Belgium. What keeps the Walloons and Flemish together is only the wish to have Brussels. And we are talking about two nations who for two hundred years have not fired a single shot against each other. Here we are immersed in blood and hatred and very extreme emotions. How can one seriously believe that we should be able to be so politically mature as to respect the other and accept the other? No, no…

Tell me about your decision to place “Falling Out of Time” in a nameless and timeless place. Why was that a useful device for you?

It was not useful. It was the right thing to do. I didn’t want to root this book in Israel. I didn’t want to root it in our time. What interested me was how human beings are coping with a tragic loss. And how they try to find a way to include the death of their beloved one in their life. And how they find words to talk about it. These are much deeper questions than whether it’s taking place in the United States or Israel. The feelings of loss, of struggle, to go back to life and the longing for the one we have lost are so universal. So why minimize it or limit it to a specific place?

So it was a way to capture the universality of grief? Don’t you think there is particularity as well?

Of course there are nuances in that. You know we lost our son Uri in a war, so we know intimately how there is a kind of nationalizing of the one who died when it is a fallen soldier. And so the book is also an attempt for me personally to reclaim this loss from the national, from the collective, and to make it my private loss again. We, the Israelis, have this tendency to glorify and idealize soldiers who fell in war. Maybe because the country feels guilty for sending these young people to their deaths without really trying with all its might to achieve peace — really trying as strongly as it makes war to make peace.

The book is also trying to depict people who are dealing with fresh grief. Did you intend to capture a particular threshold moment of moving from new grief to living with it?

Let me tell you: It’s always fresh. It’s one thing that does not expire. But of course there are grades of freshness, of acuteness. I’ve discovered that the condition of grief is full of motion — it is never static. So this is something I also try to capture. For example, one of the major questions I ask is how to separate memory from pain. I think this ability might change and improve over the years. Because in the beginning every memory is so much immersed in pain that you cannot allow yourself to remember. So not only is a family’s future cut, but its past is as well.

You see, I’m telling you about all kinds of nuances of grief, and this was one of the main motivations to writing this book, because I felt that it was a human condition that until it happened to me I didn’t know with such acuteness. I felt I needed to write it. I told my wife that if I was unfortunate enough to be sent to this exile — because grief is exile, you are exiled from everything that was taken for granted before — at least I will map it with my own words. I’ll give it my words and my name.